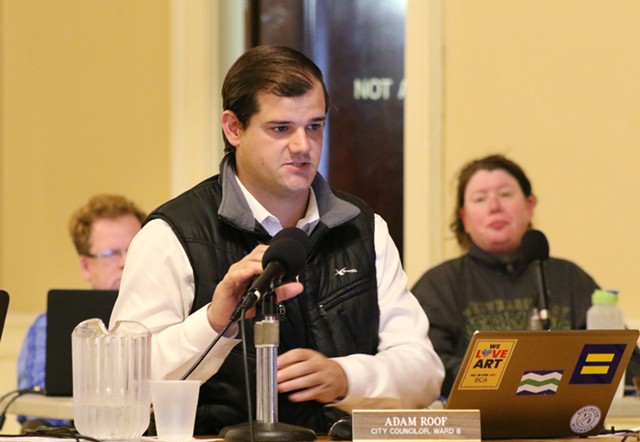 Roof, 31, told Seven Days he’s running as a Democrat for one of the six Chittenden County Senate seats because the state needs people with a diversity of government, nonprofit and business experience to help Vermont recover from the pandemic.

“If we’re not able to work across those sectors in the next couple of years, we’re going to be in a lot of trouble,” he said.

There will be two openings in the district as incumbents Tim Ashe, the Democrat/Progressive Senate president pro tempore, and Debbie Ingram, a Democrat, are running for lieutenant governor.


Roof was first elected to the Burlington City Council as an independent in 2015 representing Ward 8. He later switched to run as a Democrat, but was soundly defeated in March by Jane Stromberg, a Progressive with little political experience.

Progressives Knock Off Incumbents, Take Majority on Burlington City Council
By Courtney Lamdin, Molly Walsh and Kevin McCallum
Off Message
Roof is a project manager at BTV Ignite, a local nonprofit with a mission to spark tech innovation and growth in the Queen City. The organization is managed by the Lake Champlain Regional Chamber of Commerce. He is also cofounder of an online retail clothing business. Before that, he was a painting contractor and a bartender.

In a fundraising email Tuesday, Roof wrote that the state needed “bold, experienced leaders” during this uncertain era.

“This is a time to come together and work collaboratively to support our communities, putting partisan politics aside to enact policies that will directly help residents and promote the progressive values that make Vermont so unique,” Roof’s email reads.

Giambatista has suspended his fundraising for the seat during the pandemic, urging supporters to donate to COVID-19 charities instead.

Also in the race are Tom Chittenden, a South Burlington city councilor; Steve May, a clinical social worker from Richmond; and Louis Meyers, an internal medicine physician at Rutland Regional Medical Center.

Candidates must file by May 28 to get on the primary ballot in August.
Prev
Next