A Canadian Artist Compiles Burlington History for a Mural 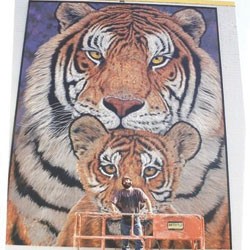 A drab passageway linking the Church Street Marketplace with the parking garage will burst forth next spring with a colorful, quirky tableau depicting Burlington’s history. And it’s likely to incite some controversy. Pierre Hardy hopes so. He’s the Canadian artist whom the Marketplace commissioned to create an enormous mural on the side of the Banana Republic building, replacing the current faded, tropical-themed one. And there will be a lot to observe in his 124-by-16-foot trompe l’oeil extravaganza “Everyone Loves a Parade!” The procession includes well-known contemporary public figures, from Sen. Patrick Leahy to Phish to Capt. Richard Phillips (rescued from Somali pirates); inexplicable ones such as an Elvis impersonator; and a number of military references.

“It’s not going to just be paint slapped on a wall,” Hardy declares. “Parade” will be executed over the next eight months on several panels of industrial-grade plywood with acrylics and high-tech versions of exterior house paint. The mural will be installed and unveiled at a celebration tentatively scheduled for May 2012.

The mural will be coated to protect it from ultraviolet light and to ensure easy removal of any graffiti. These treatments should mean that “Parade” won’t require restoration for at least a dozen years, though Hardy, 50, says he finds it “beautiful to come back to touch up my babies.”

Hardy’s murals differ from paintings in a gallery in that he wants them “to be touched — and to touch people in return.” He says he strives in his work to “create debate, to get viewers really engaged.” In the case of “Parade,” he notes that a few pacifistic locals have already objected to his planned depiction of World War II soldiers armed and in uniform. “I tell them,” he counters, “that it’s because of arms and soldiers you have freedom in this country.”

Hardy has 27 years’ experience as a muralist. He earned a fine-arts degree from the University of Québec, but, he says, “I learned how to paint murals from people in the trade.” Hardy adds that he was greatly inspired by murals painted on walls in Paris following its liberation from the Nazis in World War II.

Hardy’s biggest creation — more than twice the size of the Burlington mural he’s now producing in a studio in Essex Junction — was commissioned by the city of Pembroke, Ontario, to mark the millennium. It was partly the strength of that piece, as well as his sketches for “Parade,” that persuaded a 25-member Marketplace review panel to declare Hardy the winner of a 2009 competition — linked to the Quadricentennial — that attracted entries from 15 artists in the United States, Canada and France.

“Great murals are not cheap,” Marketplace director Ron Redmond says in reference to the $60,000 price tag for “Parade.” Hardy receives one third of that sum; the remainder covers the cost of his materials. Leunig’s Bistro & Café, Ecco and Courtyard Marriott Burlington Harbor are among the businesses helping to fund the project.

Hardy has been conducting research in and about Burlington for the past two years, but only recently was the State Department persuaded, with prodding from Sen. Leahy, to issue a work visa for the Ontario resident.

Though he has no previous connection to Vermont, Hardy says, “I know how to go deep and how to search in not-so-obvious places.” He estimates he’s spoken with at least 200 Burlington residents in the past couple of months. “I already know more about Burlington than most Burlingtonians do,” he declares.

And what impression has Burlington been making? “Overall, it’s a well-off place,” Hardy says. “Lots of entrepreneurs and artists, very liberal, very — what shall I say? — free spirited.”

A “zoomify” version of Pierre Hardy’s mural can be viewed at hardyart.com/everyonelovesaparade.html.