The Burlington City Council on Monday will consider a measure to make mask-wearing mandatory in all city shops. Another resolution up for vote would remove the controversial "Everyone Loves a Parade!" mural from the Church Street Marketplace by the end of August.

The packed agenda also includes a request from developer Eric Farrell to add 180 more apartments to his 770-unit Cambrian Rise project, which is currently under construction on North Avenue. In addition, the council will get an update on the CityPlace Burlington development downtown.

The face-mask resolution, sponsored by Councilor Joan Shannon (D-South District), comes as retail stores prepare to reopen Monday, albeit at reduced capacity. Gov. Phil Scott has said store employees must wear masks, but he has stopped short of requiring customers to do so.

At a press conference Friday, the governor did say that municipalities can set their own requirements — and Shannon said she has the votes to make it a reality on Monday. Progressive councilors Zoraya Hightower (Ward 1), Brian Pine (Ward 3), Jane Stromberg (Ward 8) and Jack Hanson (East District) all signed on as cosponsors.

Shannon's been involved with Burlington's Community Mask Initiative, which has distributed more than 15,000 facial coverings citywide. She said she introduced the measure after seeing Burlingtonians on social media express concerns about the lack of a uniform policy for mask-wearing in stores.

Guidelines from the U.S. Centers for Disease Control and Prevention recommend facial coverings for everyone except children under 2 years old and people who have trouble breathing. The resolution asks that shop owners post signage at their entrances to warn customers of the rule. 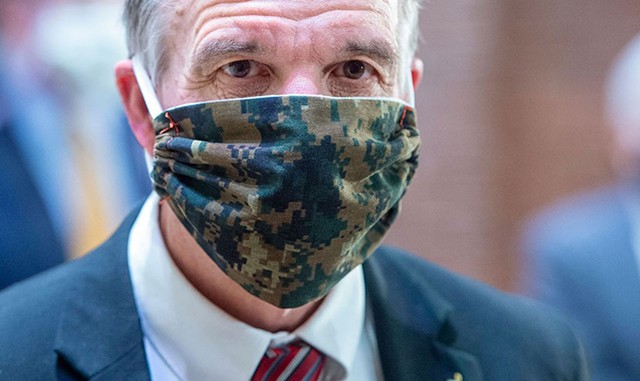 "The people of Burlington believe in taking care of our own and strive to help and protect our neighbors and loved ones," the resolution says. "Wearing a face covering is an important act we can do in an effort to protect others from an infection that we may not even know we have."

The mural resolution also has wide-ranging support and appears to have the votes to pass. Sponsored by Councilor Pine, the measure would chart a course to remove the mural by this August. The city council voted in October 2018 to relocate the mural by August 2022, but Pine says "a significant majority of the council is ready to act" now.

The council makeup has changed significantly since October 2018, and three recently elected councilors are among the measure's cosponsors: Hanson, who was elected in March 2019, plus Stromberg and Sarah Carpenter (D-Ward 4), both of whom were elected in March of this year. Also signing on as cosponsors are councilors Ali Dieng (I-Ward 7), Karen Paul (D-Ward 6) and City Council President Max Tracy (P-Ward 2).

Painted by Québécois artist Pierre Hardy in 2012, the mural has generated significant controversy for what critics say is a white-washing of Vermont's history. The painting celebrates Samuel de Champlain's "discovery" of Lake Champlain and primarily features white subjects. Activists have defaced the mural more than once.

Musician Eric Maier Reflects on His Vandalism Crime and the Album It Inspired
By Dan Bolles
Culture
"The mural fails to represent our real, full history," Pine said. "It doesn't tell a people's history. It’s a sanitized, Disney version of who made Burlington what it is."

If passed, the resolution would direct the city to place the mural in storage until "a recommended plan can be developed." The council's Parks, Arts and Culture Committee would then issue a recommendation "for the relocation or disposition of the mural no later than September 30, 2020."

Read the resolutions below: