Progressives will have a majority on the Burlington City Council after big wins on Town Meeting Day.

Political newcomer Zoraya Hightower, a Progressive, unseated 32-year incumbent Sharon Bushor, an independent, in a three-way race in Ward 1. Until this election, Bushor had been endorsed by the Progs every year since she first ran for city council in 1987. She also sought, and lost, the Democratic nomination.

“I’m incredibly excited,” Hightower said at the Progs' party at Rí Rá Irish Pub on Church Street. “I think it’s a huge vote of confidence to have more than half of the voters vote for me. I know I have big shoes to fill, but I look forward to the challenge.”

Another Prog, Jane Stromberg, notched an upset when she took down incumbent Adam Roof, a Democrat, in Ward 8. First elected in 2015, Roof out-fundraised and outspent Stromberg, but it wasn't enough to stop her impressive showing: Stromberg got 635 votes to Roof's 427. 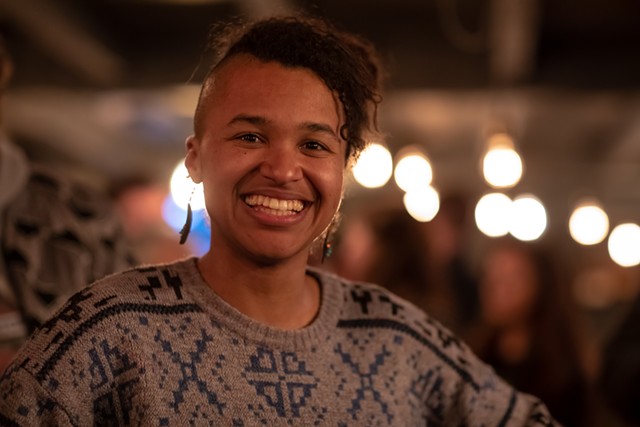 Stromberg, wearing a flannel over a Bernie Sanders T-shirt, stood on a chair in the back room of Rí Rá as she gave a speech. "Guys! What just happened!?" she said to loud cheers.


Stromberg said that as she started considering whether to run for city council, she asked herself whether there was demand for real change in Burlington — and Tuesday gave her her answer.

Newcomers Look to Oust Bushor in Burlington's Ward 1 Council Race
By Molly Walsh
Off Message
While out campaigning, Stromberg said voters shared her concern about the climate emergency and the need to treat it as such. Even so, she said she was prepared to lose Tuesday "because we are going up against the machine."

Two years ago, the Progressives began "taking down the Democratic establishment" and they achieved the goal Tuesday, she said: "We did it. We actually did it!"

Roof raised about $4,300 and spent approximately $3,000 in his unsuccessful bid to keep his seat, according to financial disclosures filed with the Vermont Secretary of State's Office on February 28. Over the same time period, Stromberg raised some $3,700 and spent about $2,300.

The Dems did pick up a seat that the party did not previously hold. Sarah Carpenter earned 1,317 votes to win in Ward 4, a seat left vacant by Council President Kurt Wright, a Republican who did not run for reelection.

Despite that, Wright picked up 639 votes — about 30 percent — as a group of supporters ran a write-in campaign for him. That bested the 263 votes earned by Ericka Bundy Redic, an independent whose name appeared on the ballot.


“I can’t help but feel grateful about that,” Wright said, noting that this election marks the first time in two decades that he won’t hold an elected office.


Wright had decided not to run for reelection because federal broadcasting rules dictated that his daily radio talk show, "The Morning Drive," would have had to offer equal time on air to all candidates. WVMT station owners told Wright he'd have to take a 60-day hiatus from the airwaves; instead, Wright chose not to run.

“It’s not a surprise,” Wright said of the result. “We knew that getting people to write your name in … is very difficult.”


Tracy attributed the result to a sustained effort to reinvigorate a Progressive Party that a decade ago “had basically hit rock bottom” and had little power.

“This did not happen because of the candidates alone. This happened because of the team behind them," he said. "What we see is that when we bring more people into the political process, Progressives do really well."

According to Tracy, the priorities of the new Progressive majority will revolve around transparency and accountability, including the police and their approach to racial justice. Other initiatives would be a bolder response to climate change, improved bike lanes and safe injection sites to help people struggling with addiction.

“Now we can have a real conversation about things like rent control, which I never thought was possible,” Tracy said to an ecstatic crowd.

“There is a general sense that the city is not meeting the needs of working people,” he said.

Wronski said that Roof, who formerly ran as an independent, picked a bad time to align himself with Mayor Weinberger's Democratic base.

"People were ready for something different, and I think Adam was associating himself more with the current administration," Wronski said.


Wronski said the Progressives put together an “unprecedented grassroots coalition of organizations and individuals who feel dissatisfied with the current administration,” including unionized city workers.

The result made him optimistic “of our chances to unseat the mayor next year.”

“We’ve seen the Progressives in the past two years be an opposition party rather than a governing one,” he continued. “They’re going to have to work with our elected mayor and find a way to get things done for Burlingtonians.”

Ward 5 Democrat Chip Mason held onto his post by a 185-vote margin, edging out Progressive newcomer Nathan Lantieri. Mason got 1,212 votes to Lantieri's 1,027.

Mason, speaking at the Dems party at Halvorson's Upstreet Café on Church Street, attributed his win to voters recognizing his experience in city government.

“I’ve worked hard for my constituents for the last eight years, and I think they're — at least for the next two years — willing to give me a shot to continue those efforts,” Mason said.


Mason said the Ward 2 and 8 elections didn’t go as Democrats had hoped. He said that Dems and Progs have similar goals, just different ways of achieving them.

Donnelly, the party chair, agreed. “We want to fight for those [values] as much as they do," Donnelly said at the Dems’ watch party. "I'll put everything I have into the next election and into finding a good candidate to take on that challenge."

Donnelly lamented Roof’s ouster, saying the Ward 8 councilor is “one of the hardest working, most pragmatic and uplifting” Democrats on the council.

Nick, the Ward 2 hopeful, said it was tough to go against an incumbent. Tracy was first elected in 2012.

"It was a really hard fought race,” he said. “We knocked on nearly every door and had a lot of good conversations with the neighbors. So I'm really proud of the race we ran. We worked our butts off on it."

Would he run again? "I got this news about 20 minutes ago, and obviously I need to think about it,” Nick said. “So can I get back to you on that one?"

Fellow Democrat Karen Paul won her uncontested reelection in Ward 6. She arrived at the Dems' watch party to a round of applause.

Kelly Devine, executive director of the Burlington Business Association, was among those at gathering. Regardless of who gets elected, "we have to work with everybody to get stuff done," said Devine, saying she planned to "bop" around to other events on election night.

As for the city council results Tuesday night, she said: "It's politics, you know how it goes."

With their wins Tuesday, Progressives will hold six seats on the 12-person council. Dieng, a Democrat/Progressive, often votes with the Progs. The Democrats will hold five seats.

Related To the Rescue? Burlington Wants Money for EMTs in Year of Big Tax Increases

Burlington will also send a proposed charter change to the state legislature. The measure would make state and local ballots available at the same time.

Currently, local ballots must be provided 20 days before an election, while state ballots come out 45 days beforehand. That measure passed with 86 percent of votes.


About 50 people had assembled at Halvorson's once the results were in, trading hugs, drinking beer, and creating a mood that was joyful here and there but mostly subdued. Mayor Weinberger gave an encouraging speech to the winners and losers. "Nights like tonight where you have both great victories and some challenging setbacks, they are tough nights," Weinberger said. He said that victories on the ballot issues, especially the increase in funding for public safety and the city's Housing Trust Fund, were victories for all the Democrats on the council. He thanked the candidates for running hard-fought campaigns and gave a shoutout to victor Sarah Carpenter, who succeeded in the city's historically more conservative New North End.

"She is someone who brings vast experience with housing ... and a deep, deep understanding of Burlington" that only comes from someone who has grown up in the city, Weinberger said.

The mayor also praised Mason for pushing to reelection, and noted that they were elected on the same day eight years ago. "I am so thankful that the voters of Ward 5 understand what a workhorse you are," Weinberger said.

He praised Mason for playing a key role on the council and said it would have been a "huge loss" to the city had he been defeated.

Weinberger quipped that unopposed Ward 6 incumbent councilor Karen Paul had "the most impressive outcome of the night" — essentially a 100 percent victory. But, the mayor said, you don't get a chance to run unopposed in Burlington without earning it and praised Paul as "one of the hardest working councilors the city has ever seen; congratulations, Karen.''

The crowd cheered Mason, shouting "Chip, Chip, Chip, Chippeee." He responded with thanks to all who supported him but admitted to tough competition.

Carpenter also thanked her supporters. "This is so exciting for me, my first foray into elected politics." She said she looked forward to representing her neighbors and added: "It will be fun, and after about 12 hours of sleep, it will be even more fun."

Paul also thanked her supporters and acknowledged that it was a hard night for Burlington Dems, but "not the end of the world." The Democratic Party is the party of "optimism and hope," she said.

Adam Roof seconded that, and conceded it was a difficult night for Burlington Democrats. "But that does not mean that we are down and out, that just means that we are behind for the moment," he said. "Together, we will find a way forward."
Prev
Next