But on Tuesday at 10:30 a.m., the lot was virtually empty, save for a Burlington School Food Project van and several long folding tables neatly lined with toys.

Since March 18, the Pine Street school has served as one of the Burlington School District’s 11 food distribution sites, providing free breakfasts and lunches to Queen City kids ages 18 and under.

Breakfast options include a grain, such as cereal or banana bread, plus milk and fruit. Families can choose a cold lunch, which is usually some type of sandwich, or frozen individual portions of hot options, such as shepherd’s pie or pesto pasta, plus fruit and vegetables. On an average week, the school district distributes about 8,000 meals, Monday through Friday.

Parents arrive by foot or by car, often with children in tow, to pick up plastic shopping bags packed with several days’ worth of breakfasts and lunches. Sometimes, middle and high schoolers — and occasionally elementary kids — come by themselves, said Sara Brown, a building substitute at Champlain Elementary School and the former owner of Great Harvest Bread Company.

“It’s been interesting to see the important role that some of these young kids play in their families,” she said. 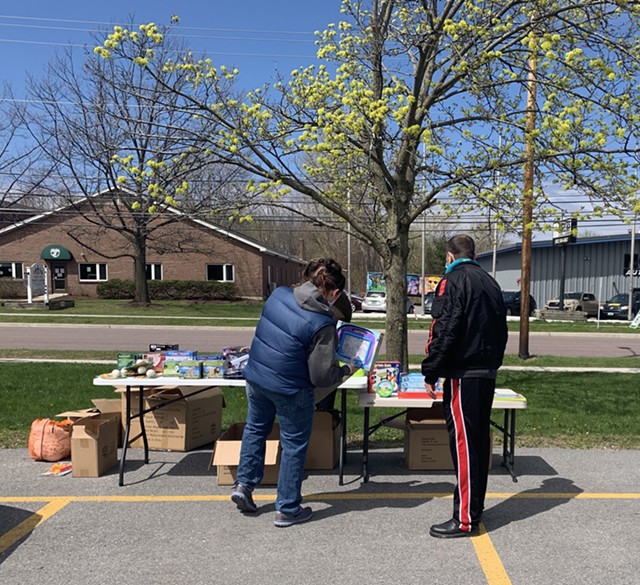 Because of her experience in food service, Brown offered to help coordinate the school district’s distribution efforts and oversee staff members, mostly paraeducators and building substitutes, who have signed on to work at distribution sites.

“We’re the only school employees who have direct physical contact with kids and families and see them face-to-face,” Brown said. “We’ve become a conduit not only for the school district but for Burlington, in some ways.”

Last week, distribution sites also began offering an assortment of toys, from animal figurines to marble runs. That was after Frank Berk, president of Vergennes-based WowToyz, contacted King Street Center executive director Vicky Smith to see if she would be interested in a donation of toys that were sitting in the company’s warehouse.

When Smith found out how many toys Berk was offering — around 2,000 — she partnered with the Burlington School District to make sure King Street Center was able to “get them into as many kids’ hands as we could.”

On Tuesday, King Street Center’s education director, Deena Murphy, and afterschool director Carrie Jacques, faces half-covered in patterned cloth masks, stood behind the tables of toys as a small but steady stream of families stopped by.

“You need to point to what you want,” Murphy told a young boy, “and then we put them in a bag for you.”

When one man told Murphy and Jacques that he had three young sons at home, the King Street Center employees helped him pick out things his boys would like — a magnetic drawing board, wooden trains and play food — careful not to give him anything with little pieces that a preschooler might be tempted to pop into his mouth. The women also offered people cloth masks made by volunteers and hotel toiletries donated by the Marriott-brand Courtyard Burlington Harbor.

Everyone who’s picked up toys has been “so appreciative,” said Murphy, who’s found that her education director position has become “more of a social work job” right now.

She’s trying to make sure the students she serves through the King Street Center feel safe, supported and connected to others. To that end, she’s started using an online platform called Edmodo, where kids can post pictures of what they’ve been doing. Still, she said, “there’s such a yearning. You just want to run over and hug them.” 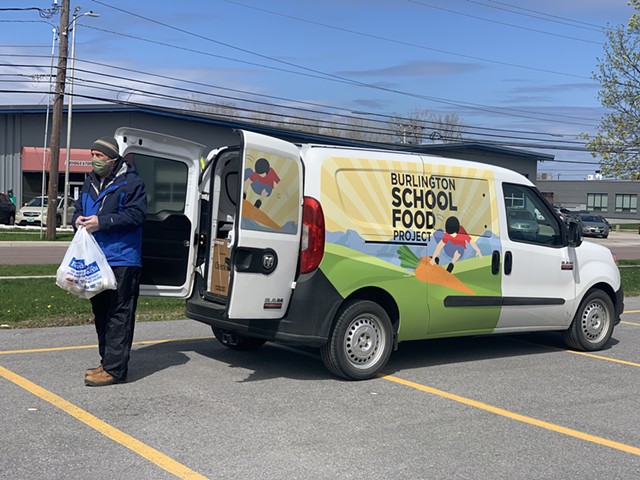 Misty Peck, who lives at the South Meadow Apartments, came to get food and toys for her daughter, a kindergartener. She also picked up an educational packet; grade-level teams create them each week to distribute along with food to interested families.

Peck likes the Champlain distribution site, she said, because Fletcher Free Library is often there giving out free books. On Tuesday, Peck picked up a Dig It Up! Dinosaur Fossil game, a telescope and a puzzle from the table of toys. Her daughter immediately asked when she could open them and start playing.

Among those helping to distribute meals on Tuesday was Bob Church, an automotive science and technology teacher at the Burlington Technical Center.

He’s still working with students through Google Classroom and asking them to document projects they’ve undertaken at home, from fixing a lawnmower to building a backyard play set. But now, he’s also helping to feed members of the community.

“I actually enjoy it. It’s been a great opportunity for me,” Church said. “It gets me out of the house.”

“I feel like I’m running a little deli here,” Church quipped as he stood by the open trunk of the Burlington School Food Project van.

It’s a deli where customer appreciation is evident. “Thank you, good sir!” one man, carrying bags of food, yelled to Church as he walked to his car.
Prev
Next