Vermonters Are Watching Their Neighbors — and Reporting Them | Off Message

Vermonters Are Watching Their Neighbors — and Reporting Them

Forget loving thy neighbor — in the age of coronavirus, some people are more interested in narcing on thy neighbor.

Vermont has created an online reporting tool that allows people to tell on those that they suspect are violating Gov. Phil Scott's "Stay Home, Stay Safe" executive order.

It's proven quite popular: More than 270 people filed complaints between April 1 and 15, according to a ream of redacted public records obtained by Seven Days.


The complaints are funneled to the Vermont State Police but can be assigned to other police agencies, depending on where the alleged violation took place.

State troopers are leaning toward education instead of ticketing. And cops in Burlington, home to the most complaints filed with 17, say they have yet to cite or arrest anyone for violating the governor's executive order.

Nearly two-thirds of the complaints were from Vermonters reporting businesses that they presumed were running afoul of Scott's directives. Many people reported that nonessential operations — such as landscaping companies, a car wash and a “puzzle swapping library” in Stowe — were open despite being told to close.

Scott Relaxes Vermont Guidelines for Socializing, Getting Outdoors
By Courtney Lamdin
Off Message
In one complaint, a Brattleboro resident begged authorities to do something about a local grocery store clerk who “was standing only inches from two people with no mask.”

“Please can we enforce this somehow? Even if it is just a daily phone call to ask and remind,” they wrote. “Please don't say ‘we can't enforce it.’ Please make it so you CAN. Go higher up. Do something!”

A Rutland resident complained that a restaurant worker didn’t practice good hygiene when preparing food: “He had not washed his hands or put on a clean apron,” the person wrote. “I called the complaint line and the guy didn't seem overly concerned about it. Scary.”

A person from Colchester, commenting on why a construction crew was still working, asked simply: “What the heck? They had 20 guys there.” 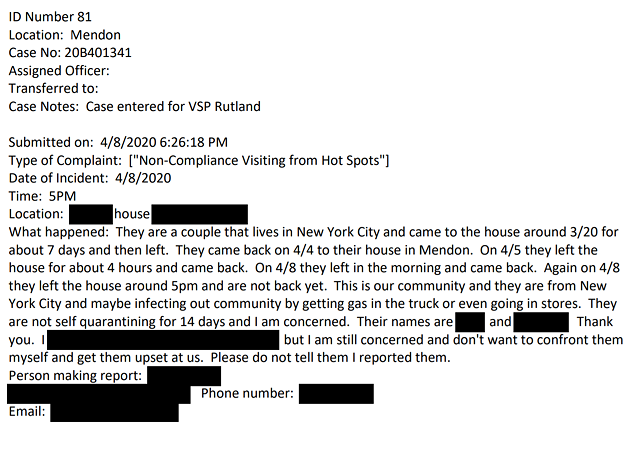 Others, in Jericho and Barton, worried about the large crowds at basketball courts. A Shelburne beach was “packed with visitors — no one social distancing,” one complainant wrote.

Some concerned citizens attempted to solve the problem themselves before alerting the authorities. An apartment complex manager in Springfield reminded tenants of their no-guest policy after they noticed 14 people had gathered for a child’s birthday party at one of the residences.

“They responded with profanity,” the manager wrote. “This particular tenant does not understand the seriousness of this situation. Any assistance with the enforcement of social distancing would be greatly appreciated.”

Someone in Swanton asked a mother to tell her child to stop approaching neighbors while riding her bike: “The mother is telling me that I need to stay inside my residence,” the person complained. The case was assigned to Swanton police for follow-up.

State, Towns Prepare for Summer Influx of Vermont's Second-Home Owners
By Courtney Lamdin
Coronavirus
The records don’t indicate how the complaints were resolved, but Attorney General T.J. Donovan has directed law enforcement to take an educational approach by first asking scofflaws to voluntarily comply with the order.

Dover police Det. Rebecca Morris said she's done just that with the handful of complaints referred to her department.

"If someone calls, and they're reporting that someone is believed to be in violation of the governor's order, we contact them and verify what we can," Morris said, noting that she's followed up both in person and on the phone.

"We educate and make sure everybody understands the order and the penalties that come from the order and then really, you know, that's it," she said, adding: "It's been very easy because we've been given clear guidance."

If the behavior continues, the rule-breaker can be fined or face criminal prosecution, though Donovan said at a press conference in March that that's "the last thing any of us want to do."

In late March, Vermont State Police did check lodging facilities across the state to ensure that they were following the order; 41 were not.

Scott to Travelers: Self-Isolate for 14 Days
By Courtney Lamdin
Off Message
The reporting tool has also been criticized as a form of government overreach. Todd M. Smith, the St. Johnsbury-based publisher of the Caledonian Record, opined in an editorial last month that “a system that sends armed police to someone’s property, based on a vague and anonymous complaint, seems neither educational nor innocuous.” Smith called for Scott to shut “the ratline” down.

“A website that borrows directly from the Gestapo playbook will prey on people’s worst instincts and ooze abuse,” Smith wrote.

Some anonymous tipsters appear to agree, using the website to register their distaste for what they see as a violation of their civil liberties. One person, who entered their location as “Fuck you,” challenged, “Try to cite my [sic] for not staying home.” Another commenter noted their location as “Upyoursville.”

As of mid-April, residents from more than 100 municipalities had used the online tool to file a complaint.

Read all of the complaints below: