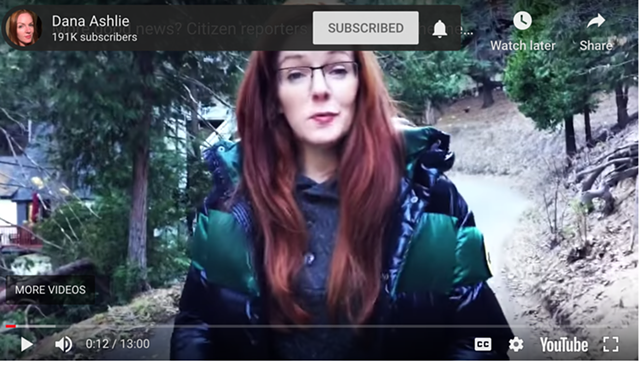 True North bills itself as “The other side of Vermont’s News,” and this was certainly another side. The 13-minute video features a voiceover by a YouTube conspiracy theorist who calls herself Dana Ashlie. She cheerfully announces at the top of the video, while strolling outdoors and smacking a ball into a baseball mitt, that citizens have scurried around to investigate the mainstream media's hoopla about people lining up for coronavirus tests and treatment.

Well, game on. Cue the scenes that question media accounts.

“People, look at the testing centers,” an unidentified woman says as her camera spans a makeshift building somewhere with no people and little more than a few empty chairs. “This is where they’re telling you the testing is going on in. Where’s the testing?” Her voice becomes urgent. “They’re empty. They’re abandoned, people. There is no testing going on.”

For the record, here’s the testing in Vermont:

That takes place in the Vermont Department of Health Laboratory. It's in this building in Colchester:

Some samples, but not all, are taken from people who drive up to the makeshift testing center at the Champlain Valley Exposition in Essex Junction.

Running the video was a curious choice for True North. It’s not Vermont-focused, for one thing. But more to the point, its maker’s credibility has been debunked.

Health Feedback, a nonprofit organization that checks the veracity of public accounts, noted in February that another claim of Ashlie’s — that 5G technology, and not a virus, caused the health crisis — is simply not true. A 30-second investigation involving a Google search leads to a body of questionable claims she's made.

Various social media platforms have announced crackdowns on coronavirus disinformation. So why did True North run Ashlie’s piece? We emailed them Thursday afternoon to ask, and so far they haven’t responded.

Seven Days asked the Vermont Department of Health for comment on the video, and spokesman Ben Truman sent this statement:


Everyone — regardless of their political or philosophical predilections – owes it to themselves, and to their families and loved ones, as well as to their communities, to seek out science-based information and guidance to inform their decisions. Lives are very much at stake.

Whatever their information source, limiting spread of the virus relies on people doing the painful but critical actions like following stay-at-home orders. We strongly encourage people to talk with their doctors if they have symptoms, and to stay informed through sites like healthvermont.gov to protect themselves and everyone around them.

Clarification, March 3, 2020: Following publication of this story, Rep. Donohue noted that she is not a commentator for True North Reports. Rather, she said, the site ran her constituent updates as commentaries. Likewise, Meg Hansen said her piece on the site had been submitted to VTDigger.org.
Prev
Next