Prep Underway for COVID-19 Recovery Center for Homeless | Off Message 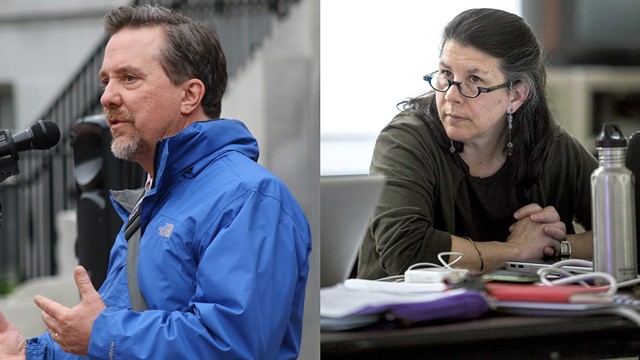 Two prominent Burlingtonians will manage a new Chittenden County healing center for homeless people and other vulnerable Vermonters with the coronavirus.

City Councilor Brian Pine (P-Ward 3) and his wife, former school commissioner Liz Curry, were recently hired to manage the covid Recovery Center, an ad hoc operation that will be overseen by the Champlain Valley Office of Economic Opportunity.

The state is currently negotiating a lease with a hotel in Chittenden County, according to CVOEO executive director Jan Demers. The space will be able to house up to 200 people or families from Chittenden, Franklin, Grand Isle and Addison counties, along with several staff members, she said.

Eligible patients must have a positive COVID-19 diagnosis and either be homeless or live someplace where they can't self-isolate, such as at a group home, Demers said.

The center — a collaboration between CVOEO, the State Emergency Operations Center, the City of Burlington and the University of Vermont Medical Center — is one of several that will open around the state, Demers said.

A recovery center at Goddard College is already operational in central Vermont, though it hasn't been welcomed by some Plainfield residents, who worry that patients — who are not under forced quarantine — could spread the virus in their community, the Barre-Montpelier Times Argus reported this week.

Curry will serve as the full-time operations manager at the Chittenden County center. Her first task is wading through the “deluge” of résumés from job applicants for positions ranging from an associate operations manager to admissions and intake staff. The center will employ up to 25 people, all of whom will report to Curry — except Pine.

Many of the job seekers have medical or social work backgrounds; others have recently been laid off from their workplaces, Demers said.

Curry doesn’t have recent experience in human services. But she said her past work as a consultant for environmental group VEIC has helped her become well versed in policy making and program design, essential skills for her job at the center.

“If I had seen this job description [before the coronavirus crisis], I would have read it and said, I’m not that person,” Curry said. Rather, she continued, “I have a background in just doing what needs to be done.”

Both Curry and Pine have experience helping vulnerable populations. In the 1980s, Curry helped establish the Firehouse Family Shelter in Burlington, which is now operated by the Committee on Temporary Shelter, aka COTS. As a staffer for the city’s Community Economic Development Office, Pine helped residents of the New North End’s Northgate Apartments purchase the property and keep the units affordable. He has served on the community’s board of directors for a decade, he said.

While Curry is in charge of people at the center, Pine is managing the physical space. He’ll be most involved in the initial setup and configuring rooms for patient care and storage for medications, working about 25 hours a week, according to Demers.

“I’ve been feeling a real strong desire to do something about this crisis,” Pine said. “It’s incredibly rewarding to have an opportunity to do something locally … to help people you’ve never met.”

The recovery center will be open 24-7 with some staff working shifts and others staying at the hotel. Patients will be isolated in their rooms, and staff will deliver three meals daily; medications will be brought to the site. Health providers from the Community Health Centers of Burlington, which operates a homeless health care program, will provide telemedicine services or visit the site if needed, Demers said.

Staff will be outfitted in personal protective equipment and will minimize time spent in the patients' rooms. The operation will take over the entire hotel.

“Wherever we are, we’ll be the only ones in the facility,” Demers said. “That’s the only thing that makes sense as far as safety is concerned.”

Demers said the partners have been working at “a breakneck speed” to work out logistics, order personal protective equipment and hire workers. As soon as the state secures a lease, the center will be quickly up and running, she said.

“In the middle of the night, you’re trying to think of every angle and [you're] feeling that anxiety," Demers said. "Then in the day, when the answer comes, you say, ‘OK this is doable. We’re gonna go forward.’”

Curry, too, is motivated by the challenge ahead.

“I feel really grateful to have the opportunity to do my best to create an environment where, for an important part of their life, [the patients] can lie down in a comfortable bed and have their needs met without thinking about the weather and where they’re going to sleep,” she said. “Just for a few weeks, they’re going to be able to live in a hotel.”
Prev
Next