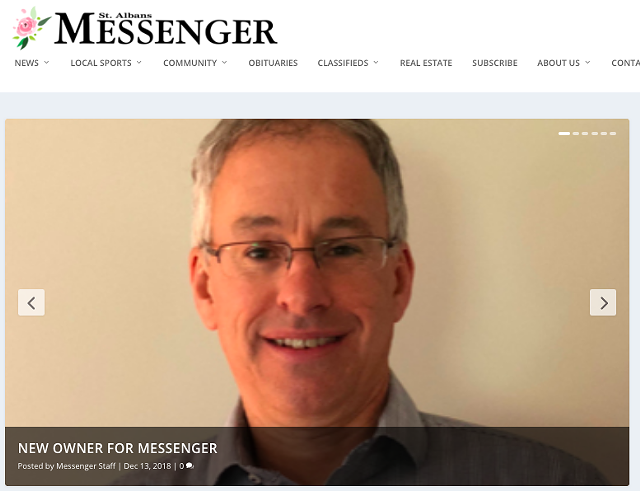 Emerson and Suzanne Lynn, the owners of several local newspapers in Chittenden County, are selling the St. Albans Messenger.

The buyer is Chicago-based publishing executive Jim O’Rourke, according to a story posted on the Messenger's website. The announcement did not disclose the terms of the sale.

Emerson Lynn bought the paper, which publishes six days a week, in 1981. His company, the Champlain Valley News Group, is based out of the Messenger offices in St. Albans.

The Messenger's announcement on Thursday did not explain why the Lynns decided to sell the paper, though it says that Emerson and Suzanne will continue their jobs there as editor and general manager, respectively. The story also did not address the future of the three remaining newspapers in the Champlain Valley News Group — the Essex Reporter, Milton Independent and Colchester Sun.

Related Brothers in Ink: While others elegize print journalism, Emerson and Angelo Lynn are hot on the presses

Brothers in Ink
While others elegize print journalism, Emerson and Angelo Lynn are hot on the presses
By Ken Picard
Media
The Lynns and O'Rourke did not immediately respond to requests for comment Thursday afternoon.

According to the Messenger, O’Rourke lives in the Chicago area, where he's been an executive at World Book, a subsidiary of Berkshire Hathaway that publishes educational materials. He also spent two years as president and publisher of a group of Michigan newspapers owned by Digital First Media. Before that, O'Rourke worked for GateHouse Media from 2006 to 2012.

O’Rourke has some experience in Vermont, according to the Messenger: He was circulation director for the Burlington Free Press from 2003 to 2005.

“I’m looking forward to being back in Vermont and am encouraged by the strength of the Messenger's brand and the role it plays in Franklin County and in the state,” O'Rourke said in the announcement. “ That’s something I want to build upon.”

The announcement quoted "the Lynns" as saying that O’Rourke’s “wealth of experience in the industry, and his proven track record at such high levels were key factors in our decision to have him be the next owner of the Messenger.”