"We’re surprised and very sorry to see him go," Seven Days publisher Paula Routly wrote in an email to staff. "But we congratulate him on this new chapter in his journalism career and look forward to competing with him."

Heintz, a Dartmouth College graduate, has worked at Seven Days since 2012, including stints as political editor, Fair Game columnist and most recently as a staff writer. 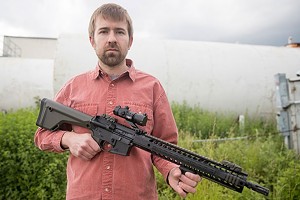 The latter investigation prompted the resignation of former Corrections commissioner Mike Touchette, as well as an independent review, the results of which were announced Wednesday morning. Heintz also covered the release of the report, which largely corroborated his findings, and filed his last update at 6:38 p.m. Wednesday, about 20 minutes before his resignation was announced.

Guarded Secrets: Claims of Sexual Misconduct, Drug Use Plague a Vermont Prison for Women
By Paul Heintz
Prisons
His coverage has won numerous journalism awards over the years. The New England Society of News Editors named him the New England Journalist of the Year in 2017, when Heintz was 33.

“He’s not just a dogged reporter and eloquent writer,” the judges said at the time, “he’s a leader in the field.”

As a board member of the Vermont Press Association, Heintz also led the lobbying effort behind the state's media shield law, which protects reporters from coerced disclosure of information or confidential sources.

He replaces Colin Meyn, who left VTDigger last month to move to the Washington, D.C., area with his family. The managing editor oversees all VTDigger reporters, plus a team of editors.

“After nearly nine years at Seven Days, it’s tough to say farewell to my friends and colleagues at Vermont’s best newspaper. The quality of journalism this team produces week in and week out is just extraordinary,” Heintz said. “At the same time, I’m excited for a new chapter and a new challenge. VTDigger is reinventing the way we fund local and state journalism to make it sustainable for the long haul. I can’t wait to work with its talented team of reporters and editors.”

In a post announcing the hire, VTDigger founder and editor in chief Anne Galloway said she expects Heintz to elevate the nonprofit organization's daily and investigative reporting.

“I have competed with Paul for years and have admired his work from afar,” she said. “Now I look forward to working with him to make VTDigger the most reader responsive news organization in Vermont.”

Routly said Seven Days expects to hire a reporter to fill the vacancy created by Heintz's departure.  The paper announced earlier this week that longtime Vermont journalist Dave Gram will revive the Fair Game political column in 2021.
Prev
Next