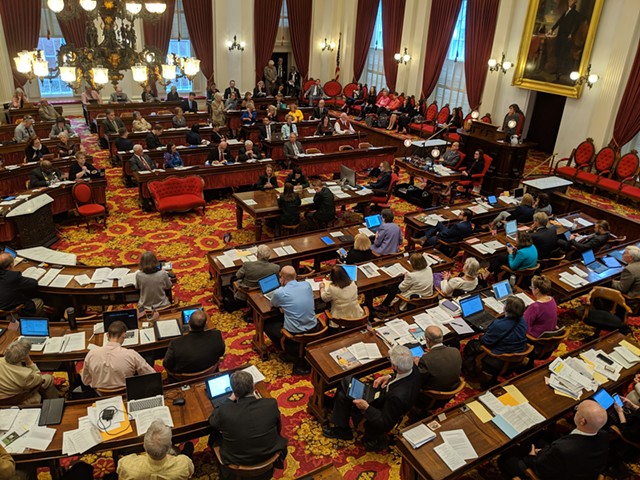 If one were ranking the worst possible places for a coronavirus outbreak in Vermont, the Statehouse would have to be pretty high on the list.

For four days a week, people from every Vermont county converge inside the Montpelier building, where they spend most of their time brushing elbows in cramped hallways and stuffy committee rooms.

"It is close quarters, long hours and an old building with an old air-handling system — with a lot of members of the public," summarized House Speaker Mitzi Johnson (D-South Hero).

These people then head back to their own communities with whatever germs they may have picked up along the way. That's partly why Rep. Sam Young (D-Greensboro) calls the Statehouse the "perfect place" for the virus to spread.

Vermont's First Coronavirus Patient Lives in Bennington County
By Kevin McCallum
Off Message
With all this in mind, the legislative committee charged with making decisions about the Statehouse and its operations expects to meet briefly Tuesday morning to start contingency planning, with anticipated discussions ranging from prevention efforts to what would trigger an early adjournment.

Sen. Tim Ashe (D/P-Chittenden), who chairs the Joint Rules Committee, said the group had planned to start that work later this week, but moved up the discussion after state officials on Saturday announced Vermont's first case of the COVID-19 virus.

The patient, a Bennington County resident, was being kept in isolation at the Southwestern Vermont Medical Center. The patient was not believed to have traveled abroad to one of the countries with serious outbreaks of the virus, raising the likelihood he was infected from contact with someone in the community.

Vermont Health Officials: We're Prepared for the Coronavirus
By Courtney Lamdin
Off Message
Vermont officials have not issued any restrictions on public gatherings or facility closures, but say they have plans in place should that become necessary.

Lawmakers, meantime, are discussing their own plans to prevent an outbreak at the Statehouse. One suggestion floated in recent days is allowing only essential personnel to enter the building.

Such a mandate would mark a major shift from the open-door policy that defines the so-called “People’s House." It could force the dozens of witnesses who weigh in on bills each day to phone in their testimony. It would also place a moratorium on the many student Statehouse tours — an idea that Young recently endorsed on Twitter.

The Vermont State House has always been a petrie dish of infectious disease. In light of the #COVID19 outbreak, I think it is time to at least cancel school field trips to the State House. #vtpoli @MitziJohnsonVT @TimAsheVT


"There’s always several legislators sick all the time," Young told Seven Days on Monday, adding that a coronavirus outbreak at the Statehouse, where the demographic tends to be older, "could be really serious."


But even if entry were restricted to lawmakers, legislative staff and media, that would still permit hundreds of people to come and go each day, which is why another option is to encourage committees to perform their duties remotely.

That could be a complicated process, however, because legislators are required to be present in person when casting votes, and members feel strongly that the public must be afforded the opportunity to weigh in on the lawmaking process, Johnson said.

"We are looking at making sure to balance the constitutional democratic process [against] public health and safety," Johnson said. She added, “The tricky question is, what are the trigger events that move us from general hand washing, ‘Don't come in if you’re sick,' to having firm rules about not attending?"

The rules committee will discuss such questions over the next few days, Ashe said. The legislature typically adjourns sometime in May, so members will also need to decide what it would take to force lawmakers to cut the session short. For example, would a confirmed case in Montpelier be enough to pull the plug? Would someone need to have stepped foot in the building?

Ashe stressed that guidance from the Vermont Department of Health will factor into any decision.

"What we don't want is every level of government to reach a different decision about how it’s going to react," he said, adding that state officials he spoke with on Sunday were not yet prepared to say what specific events should trigger a closure.

The coronavirus is already prompting some to avoid the Statehouse. The Vermont Coalition for Disability Rights announced Monday that it was canceling Disability Awareness Day, which had been scheduled for Thursday, March 12.

Several health-focused legislative committees plan to hold a joint hearing Tuesday afternoon to learn about the state’s preparedness to handle an outbreak.

Sen. Dick Mazza (D-Grand Isle), a member of the Joint Rules Committee who has been in the Senate since 1985, said he has never seen the legislature adjourn early because of a public health crisis.

Luckily, he said, the session is half over, with the two chambers preparing to soon swap bills — which will allow them to act quickly on any vitally important measures. They may just have to take a few extra precautions before the bills hit their desks.