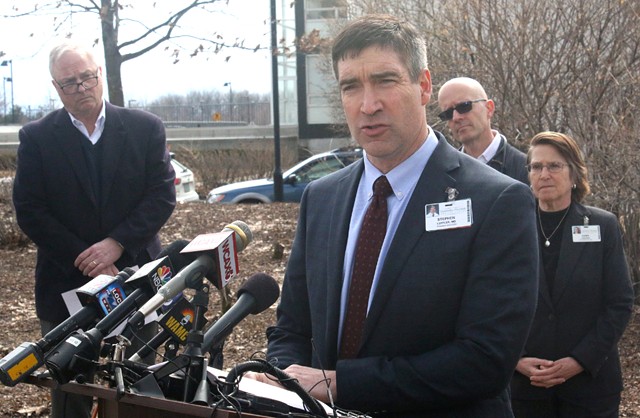 The Chittenden County man, who is in his 70s, was admitted to the hospital on Tuesday and a coronavirus test resulted in “presumptive positive” finding, according to Stephen Leffler, the hospital’s president and chief operating officer.

Vermont Announces Second 'Presumptive Positive' Coronavirus Case
By Courtney Lamdin
Off Message
The patient was being treated in an isolation room at the Burlington hospital’s intensive care unit. The Vermont Department of Health was investigating the man’s social contacts and travel history.

Neither Leffler nor health network CEO John Brumsted would release additional information about the patient, citing federal privacy laws. Rather, they spoke at length about the health network’s preparedness and urged the public to limit social interactions to prevent the spread of COVID-19.

“We should be staying approximately six feet apart from each other. We shouldn't be meeting in crowded, small rooms. Therefore, that's why we're out here in the glorious spring weather,” Brumsted said to a press gaggle outside the hospital’s main entrance.

He also called on entertainment venues to “strongly consider not holding events.”

Brumsted urged that only “acutely ill” patients come directly to the hospital. He said others should first call their primary care doctor, who can recommend whether they should be tested. Leffler said that unless patients have exposure to a known coronavirus patient or have traveled to high-risk areas, they likely will not be tested.

“That will change as the number of [patients] in Vermont grows, but that's how we're doing it now,” he said.

Dr. Tim Lahey, who specializes in infectious diseases, said Vermont had limited test kits when the outbreak first started and had to use them sparingly. Now, “we have the ability to test as many people as we need to ... but we still want to be really strategic about how we use them," Lahey added.
UVM is planning to introduce drive-up testing to limit the number of people in the hospital facility. Southwestern Vermont Medical Center in Bennington started the practice after the state’s first COVID-19 patient began treatment there last week.

The hospital will also limit visitors to two per patient; previously, groups were allowed in.

Doctors said Vermont cases will likely continue to grow. As of Thursday afternoon, 97 Vermonters had tested negative for coronavirus, and 212 were being monitored for symptoms. Another 70 have completed monitoring with no sign of disease.
Prev
Next