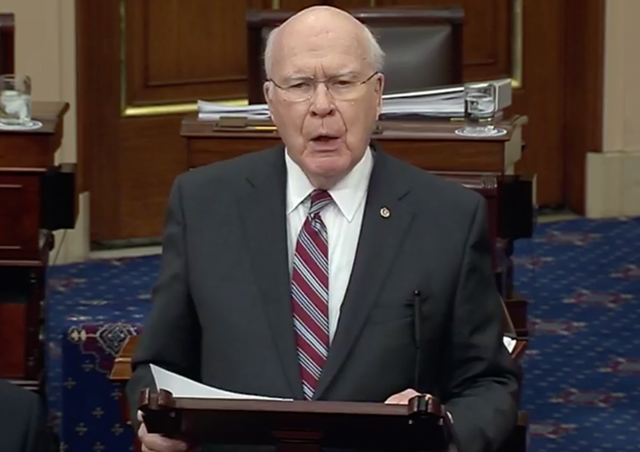 Sens. Patrick Leahy (D-Vt.) and Bernie Sanders (I-Vt.) both voted Wednesday to convict President Donald Trump in a failed effort to remove him from office during the nation's third-ever impeachment trial.

The full U.S. Senate voted to acquit Trump on the two charges he faced.

Less than an hour before the historic vote, Leahy urged his colleagues to hold the president accountable for his “brazen abuse of executive power” by inviting foreign interference into U.S. elections.

Sanders spent Wednesday morning on the presidential campaign trail in New Hampshire but returned to Washington in time for the vote. He submitted a written statement for the record explaining his votes.

Impeachment required a two-thirds majority, or 67 votes, since all 100 senators were present. The results were mostly along party lines. Only Sen. Mitt Romney (R-Utah) defected and voted to impeach Trump on the first article, which charged that the president abused his power by withholding military aid to pressure Ukraine to investigate his political rivals. Trump was found not guilty by a 52 to 48 vote.

The second article charged that Trump had obstructed Congress by directing federal officials to ignore subpoenas to testify in the House trial; the president was acquitted by a 53 to 47 vote.

Before Wednesday, neither Leahy nor Sanders had said publicly how they'd vote, though both supported the impeachment inquiry. Last week, both senators lambasted Senate Republicans for breaking with precedent and refusing to allow witnesses to testify in the trial.

"It defies basic common sense that in a trial to determine whether the President of the United States is above the law, the Senate would not hear from the people who could speak directly to President Trump’s behavior and motive," Sanders said. "Leader Mitch McConnell’s handling of this trial, unfortunately, was nothing more than a political act."

Leahy was among dozens of senators who spoke ahead of the 4 p.m. vote. The dean of the U.S. Senate, Leahy was first elected shortly after president Richard Nixon resigned from office in 1974. In his speech Wednesday, Leahy referred to the Watergate scandal that took down Nixon as “quaint” in comparison to Trump’s misconduct.

Vermont's senior senator said the vote marked a “dark day” in American history. Acquitting Trump would set a dangerous precedent, Leahy argued: If Trump wasn't held accountable for freezing military aid in a quid pro quo, what would stop a future president from holding the federal budget “hostage to their personal whims?” he asked.

“The answer is nothing,” Leahy said. “We will have relinquished the very check that the Founders entrusted to us to ensure a president could never behave like a king.”

“Lord help us if the Senate agrees,” he said, “because the only lesson the president has learned from this trial is how easily he can get away with egregious, illegal misconduct.”

“We’ve only seen a preview of what will come,” Leahy added.

Vermont's lone Congressman, Democratic Rep. Peter Welch, also voted for impeachment at the conclusion of the House trial in December.

“It’s the most significant vote I have taken in Congress,” Welch told Seven Days on December 18. “It’s not difficult because the evidence is overwhelming.”
Prev
Next