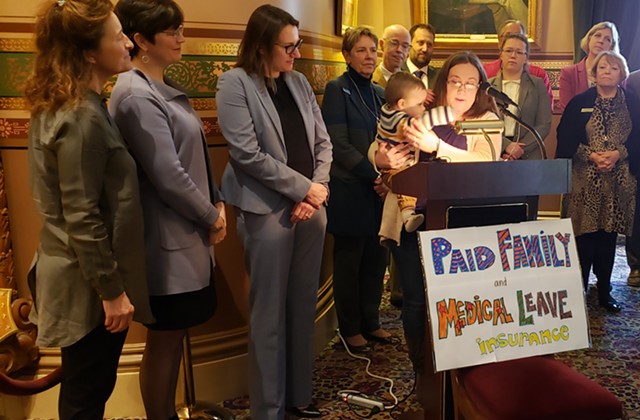 The Vermont House of Representatives approved a paid family and medical leave program Thursday — but not with enough votes to ensure it will ever become law.

Unlike the Senate, which last week approved the plan with enough votes to override a threatened veto by Gov. Phil Scott, the House fell well short of the votes needed to do so.

The final vote, following a lengthy floor debate, was 89 in favor and 58 against. At least 100 House votes would be needed for an override.

“This bill moves us one step closer to a Vermont that works for all of us,” Rep. Dylan Giambatista (D-Essex Junction) said.

After reaching an impasse on competing versions of the bill last session, House and the Senate leaders vowed to forge a compromise this session, and last week they did just that.


The resulting bill, H.107, would allow most workers to take up to 12 weeks paid leave to bond with a newborn child, and a couple would be able to take up to a combined 24 weeks. Lower-income workers would receive up to 90 percent of their pay during the leave; higher-paid workers would get a lower percentage. Workers who need to care for a sick family member would get eight weeks of paid leave.

The costs would range from around $14.80 per year for a part-time minimum wage worker to $275 for someone making $137,700 or more per year, according to an analysis by Rep. Robin Scheu (D-Middlebury).

Supporters cited the program’s modest cost and numerous benefits, including the opportunity for parents to bond with a newborn or care for an ailing parent. The program would provide workforce stability and attract new young families to the state, they argued.

“If we speak of our economy as an engine, then paid family leave insurance is a spark plug,” Rep. Tom Stevens (D-Waterbury) said.

Stevens said the bill was the starting point to providing a vital benefit, “not the epilogue,” vowing to improve it in future years. “For it to be improved, however, it has to exist,” Stevens said.

Opponents included all Republicans, who objected to the program as another tax on working Vermonters, especially those in rural areas.

“To dig into working Vermonters’ pockets for another $29 million just does not feel like the right thing to do,” said Rep. Scott Beck (R-St. Johnsbury).

But all eyes were on just how many other representatives would oppose the bill. As it turned out, a mix of five conservative Democrats and independents voted against it out of concern about the cost of the program.

Moderate Democrat Cynthia Browning (D-Arlington) argued the bill was flawed in part because what seems like a modest program now might become more expensive for workers if the economy sheds jobs.

But some of the most vocal opposition came from five Progressive members who voted no. They argued that the bill would not cover enough vulnerable Vermonters.

“I rise in opposition to this bill not because it goes too far, but because it doesn’t go far enough,” said Rep. Robin Chesnut-Tangerman (P-Middletown Springs).

Rep. Selene Colburn (P-Burlington) said she was a strong supporter of paid family leave, and denied she was being a “purist” by holding out for something better. People who haven’t worked enough hours to qualify and workers who get ill themselves were not automatically covered, but should be, she said.

Some of the sharpest criticism came from Rep. Randall Szott (D/P-Barnard), who argued that Vermont’s image as a progressive bastion would be tarnished by enacting the bill.

"The Republican governor of Tennessee has enacted a program within his power that is more robust that what the Democratic controlled supermajority of the Vermont state legislature was able to enact within its power,” Szott said. “That is appalling.”

Particularly troubling to him and other Progressives was a compromise that means the bill would make the temporary disability insurance provision optional, similar to the plan the governor had proposed.

That would create a scenario in which “your spouse can get paid to take you to chemotherapy, but you have to take unpaid time to get treatment yourself,” he said.

Now the ball is in Scott’s court. If he vetos the bill — a virtual certainty — the House and Senate will have to decide whether to attempt a veto override. While 11 House votes might seem like a lot to pick up, at least some legislators would likely change their votes.

“Should the governor be able to veto something passed with a strong majority of 89 votes?” Chesnut-Tangerman said. “To me, it’s a different calculus.”

On Friday, the House will vote on the equally controversial minimum wage increase. A negotiating team from the House and the Senate hammered out a compromise bill this week that would hike the current state minimum wage — $10.96 an hour — to $11.75 in 2021 and $12.55 in 2022.
Prev
Next