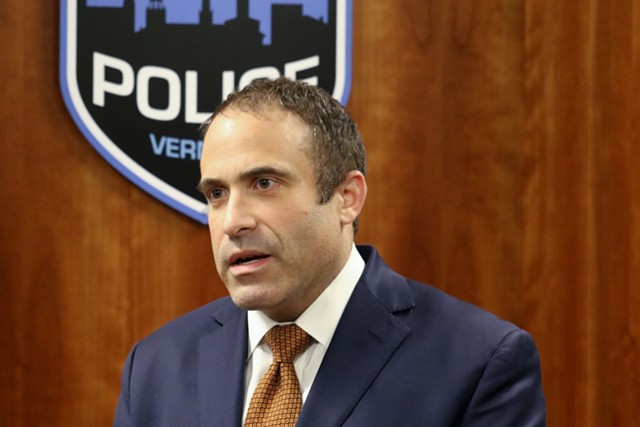 Attorneys for two men who are suing Burlington asked Judge William K. Sessions III last month to slap the city with monetary penalties and decide the case in their clients' favor in light of revelations that del Pozo used an anonymous Twitter persona to harass Charles Winkleman, a citizen critic.

As part of discovery in the civil cases filed by Mabior Jok and a group of brothers, who claimed injuries from their separate downtown arrests in 2018, their attorneys asked del Pozo to provide information about his social media accounts. In responses dated October 30 and November 6, the chief did not disclose the @WinkleWatchers Twitter account he'd used. And the city's attorneys did not disclose information about the internal investigation that had followed del Pozo's private admission last July to Mayor Miro Weinberger.

The chief resigned December 16, shortly after Seven Days published audio of an earlier interview in which he had repeatedly lied about running the account.

Burlington Police Chief Admits He Used an Anonymous Twitter Account to Taunt a Critic
By Courtney Lamdin
Off Message
Sessions was unmoved by the attorneys' claims that the city had perpetrated "a fraud" on the court by knowingly providing false answers under oath.

Sessions' five-page order found no evidence that the omissions had caused any "discernable [sic] harm" and faulted the plaintiff's attorneys for not first trying to resolve with the city what Sessions deemed "a discovery dispute."

The cases will proceed, though the litigation has become especially heated in recent weeks.

The plaintiffs' attorneys, Evan Chadwick and Robb Spensley of Chadwick & Spensley PLLC, are seeking to review new troves of documents in light of the social media scandal that has beset the police department.

Burlington Police Chief Resigns After Twitter Trolling Scandal
By Courtney Lamdin
Off Message
The city's outside counsel, Lynn, Lynn, Blackman & Manitsky, P.C., complained in filings this week that those requests have amounted to a bad-faith effort to "harass" city officials and attorneys "as a ploy for more media coverage in this case."

The parties have asked Sessions to resolve the dispute.

Violence Caught on Camera Leads to Brutality Claims Against Burlington Cops
By Derek Brouwer
Off Message
The city has acknowledged in filings, however, that del Pozo's actions may become an obstacle should the cases go to trial.

"If anything, del Pozo has created an advantage, not prejudice, for Plaintiffs that otherwise would not exist," attorney Pietro J. Lynn wrote in a filing last month. "They may be able to use the interrogatory omission at trial on issues of credibility."

Read the order below: