Burlington Police Deputy Chief Jan Wright received an eight-day unpaid suspension and must undergo a restorative justice process following an investigation into her inappropriate use of social media, the department said Monday.

Wright has been on paid administrative leave since December 16, when she admitted to anonymously using social media accounts under the pseudonym Lori Spicer. The investigation into her conduct found she also operated an anonymous Facebook account using the name Abby Sykes.

Wright has been reinstated from administrative leave and can now work on restricted duty, interim Chief Jennifer Morrison wrote in a letter dated Monday and released to the media. The deputy chief will lose five vacation days and must serve the other three days of unpaid suspension at Morrison's direction, the letter reads.

To return to full, active duty, Wright must use "restorative justice principles" to "rebuild the trust of those" she interacted with while using the anonymous social media accounts, Morrison wrote. Among those were at least three city councilors, including one Wright lied to directly in a Facebook message.

"I accept full responsibility for my posts and use of social media. I am sorry for the impact it has had on the Department, its members and the city," Wright said in a written statement. "I am deeply embarrassed by my behavior. I look forward to returning to work and taking the steps necessary to correct my behavior and to regain trust with those with whom it has been broken."

Acting Chief Had Her Own Fake Social Media Account — and Has Been Replaced
By Matthew Roy
Off Message
One of those people is City Councilor Max Tracy (P-Ward 2), whom Wright targeted with one of her posts when she was posing as Sykes. He said an eight-day suspension is “nothing more than a slap on the wrist.”

Morrison, meanwhile, said in an interview that she thinks Wright’s punishment is “firm but fair.”

“At the end of this process, Jan Wright will be a better leader and administrator than she was before,” Morrison said, adding, “I think it’s really important that when we talk about discipline, we also talk about development and growth.”

Del Pozo then lied when a Seven Days reporter asked him about the account on July 23. He told Mayor Miro Weinberger what he'd done on July 28, and the mayor placed him on administrative leave the next day.

Wright knew that del Pozo had lied to a reporter, according to the city's report, and urged him to tell Weinberger.

"While from an outside perspective, this is hard to believe, it does support [Wright's] assertion that she truly did not understand that the Chief's social media conduct was a problem," city Human Resources Department Director Deanna Paluba wrote in her investigation summary report about Wright's conduct.

Burlington Police Chief Resigns After Twitter Trolling Scandal
By Courtney Lamdin
Off Message
Wright told investigators that she thought del Pozo had also told the mayor about her own fake account.

Her failure to self-report "represents a negligent lapse in judgment and at worst, an attempt to cover her activities in the belief that her online behavior would not be discovered," the report reads.

Del Pozo started an absence under the Family and Medical Leave Act on August 1, and Wright was named acting chief.

That same day, Wright logged on as Lori Spicer and insulted a private citizen in a comment on a Burlington Police Department Facebook post. By the city's count, Wright made at least four other posts as either Spicer or Sykes while she served as acting chief during del Pozo's six-week leave of absence. At one point, Wright used both accounts to comment on the same police department Facebook post. 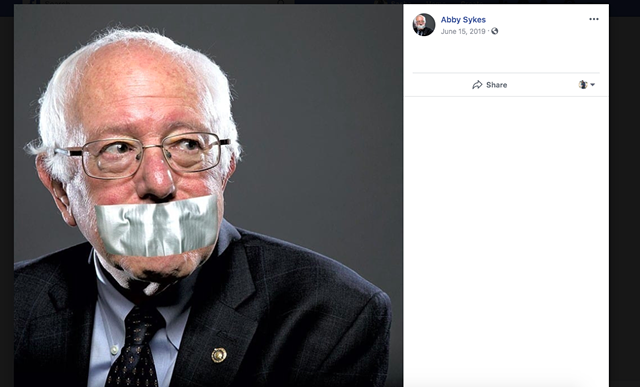 Wright also directly engaged with city councilors, including an attempt to "friend" Councilor Perri Freeman (P-Central District) last May. Freeman asked who Spicer was, to which Wright replied, "Lori - hello! Interested in following your thoughts as a councilor."

Freeman asked if she could reach out to Spicer to chat via phone. Wright replied, "No calls, please."

Last June, Wright used her Sykes account to comment on a VTDigger.org story about a special panel that was formed to review police use of force following the death of Douglas Kilburn, who died in the days after a Burlington cop punched him. She called comments in the article made by councilors Tracy and Ali Dieng (D/P-Ward 7) "inappropriate and careless."

"You have publicly convicted an officer of murder when he has not had due process," Wright wrote under the Sykes account. "Your knee jerk reaction will end up hurting the city, the taxpayers, and officer involved and I hope your chances of serving this city after your next election ... Shame on you."

On Tape: Burlington Police Chief Lied Repeatedly About Twitter Account in July Call
By Courtney Lamdin
Off Message
The report says "it is difficult to believe" that Wright didn't recognize her online behavior was improper. Wright didn't "expressly articulate or deny being a police officer" but had people known she was a cop, "it is reasonable to assume the posts would have had an altogether different tone and content," Paluba wrote.

The city opened an investigation into Wright's social media activity on December 16, the day del Pozo resigned as chief for his own bad online behavior and subsequent lies to a Seven Days reporter. 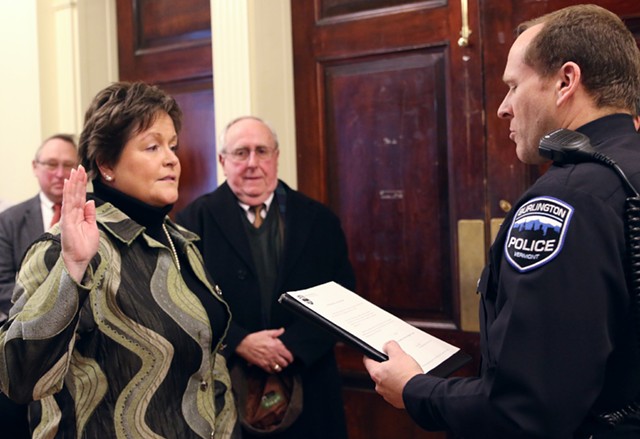 Morrison said she consulted with the mayor’s office, police commission, the human resources department and city attorney’s office before deciding how to discipline Wright. She also ordered Wright to no longer engage in inappropriate social media use, to undergo social media training and to contribute to finalizing the city's social media policy.

Morrison said she is “100,000 percent confident” that Wright won’t use anonymous social media accounts again and noted in her letter to the deputy chief that any repeat conduct “will lead to immediate disciplinary action up to and including dismissal.”

In response to a request for comment, Weinberger released a written statement Monday evening saying he agrees with the investigation’s findings that Wright’s actions were “problematic and inappropriate.” He stopped short of saying whether the punishment was appropriate, noting that the city charter empowers the police chief, not the mayor, to decide police discipline. That limitation “should be examined” as the city reviews police oversight, the mayor’s statement said.

"If it was my decision, it's possible that I would have balanced the different public interests at stake here differently and reached a different conclusion, but that's not the way our charter works,” Weinberger said in an interview later Monday night. “Certainly I had every opportunity to weigh in on this and did. At the end, it was [Chief Morrison’s] decision to make, and she's made it."

Burlington Police Chief Admits He Used an Anonymous Twitter Account to Taunt a Critic
By Courtney Lamdin
Off Message
For his part, Tracy said Wright’s actions were unacceptable and clearly targeted Progressive elected officials and police critics. He said the Wright report raises more questions — such as when del Pozo and Wright disclosed their anonymous accounts to one another — and that the public needs a full accounting on the matter.

“This notion that we can just move on, I think, is a politically convenient one for the administration,” Tracy said. “I think that in finding further clarity around these remaining questions, that we will learn lessons and hopefully craft policy and procedure to avoid this in the future.”

Dieng, who was out of the country in December when del Pozo resigned amid the beginnings of the public controversy, agreed that Wright’s punishment is too light. He said that the mayor still needs to explain why he didn’t inform councilors that he’d removed del Pozo’s gun and badge and put him on administrative leave last July.

“A deeper reflection needs to happen because I don't think the mayor knows what's happening in the city,” Dieng said.

Despite Mayor's Instruction, del Pozo Kept Working While on Leave
By Courtney Lamdin
Off Message
He’s also looking for answers from Paluba, the HR director, about why del Pozo was permitted to use his email account while on administrative leave last summer. Seven Days reported last week that del Pozo continued to work for a few days after the mayor started an investigation into the chief's online behavior.

At Monday night's city council meeting, Councilor Jack Hanson (P-East District) also expressed concern with the way the police scandal was managed. He said that both he and another councilor had offered additional information to help the city’s investigation into Wright but were never contacted.

“It seems like there could have been more information that could have been garnered by proactively seeking input from people who were involved and impacted,” Hanson said.

"I hope that having such a fulsome report will allow the public to fully assess what happened,” he said. “Hopefully that, combined with Chief Wright’s statement and willingness to engage in restorative justice, will start the healing process."

Read the entire report below: