Scott Budget Proposal Would Expand Gambling in Vermont | Off Message 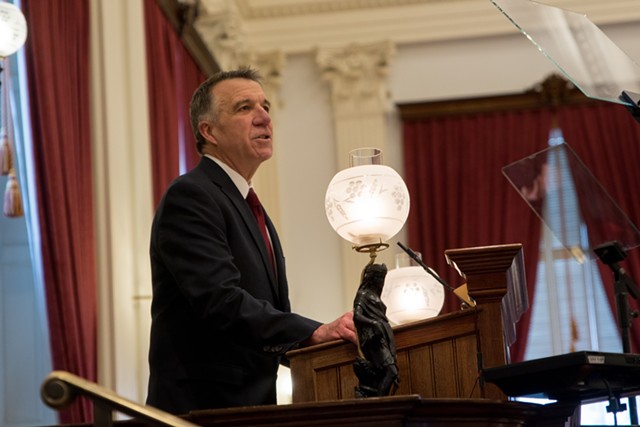 In a joint address to the Vermont House and Senate, the second-term Republican said his budget proposal would help grow the state’s stagnant population and revitalize its rural communities.

“Our demographic crisis is — without question — the greatest challenge we face as a state,” Scott said, repeating his oft-stated warning. “Addressing this reality is crucial to Vermont’s future.”

The governor’s proposed budget would not raise any existing taxes or fees, but it would create two new ones: Scott pitched legalizing and taxing online sports betting, as neighboring New Hampshire recently did, and he called for the introduction of Keno lottery machines.

The two forms of gambling would generate at least $4 million in new revenue, according to Finance Commissioner Adam Greshin. Of that, $2 million would help boost childcare subsidies, rather than support the Education Fund, as lottery proceeds currently do.

Scott’s gaming proposals, which he barely mentioned in his 38-minute address, are likely to meet resistance from the Democratic legislature. At a press conference following the governor’s speech, House Speaker Mitzi Johnson (D-South Hero) and Senate President Pro Tempore Tim Ashe (D/P-Chittenden) threw cold water on the ideas, noting that the legislature had previously rejected them.

“We'll certainly wait and listen to the details,” Johnson said. “Expanding the lottery and stealing money from the education fund haven't gone all that well in the House in the past.”

Lt. Gov. David Zuckerman, a Progressive-Democrat who is challenging Scott for governor, said that such revenue schemes tend to be regressive. “I just don't think that hooking people in with gambling and taking lunch money and heating bill money and gas money … to pay for state services is the best way to help people who are struggling,” Zuckerman said.

Scott’s budget proposal signals just the start of a four-month process during which the House and Senate must approve their own spending plans for the fiscal year that starts in July. They will then send a reconciled version to the governor for his signature or veto.

As he has before, Scott warned Tuesday that state spending continued to outpace revenue growth. He noted that, even though tax collections were exceeding expectations, his administration faced a $70 million hole when it began building its $1.7 billion General Fund budget.

Just as alarming, he said, was the state’s projected 5 percent increase in education spending, which is subject to local votes on Town Meeting Day in March.

During a briefing for reporters on Tuesday, the governor’s advisers said they had scoured the state budget for fat to trim and came up with $13 million in “efficiencies.” Those include closing the Woodside Juvenile Rehabilitation Center and bringing certain healthcare contracts in-house.

But the governor also proposed $11 million worth of new programs and another $14 million in one-time investments.

According to Administration Secretary Susanne Young, “the No. 1 takeaway” from the governor’s budget was a proposal to provide $1 million in tax incentives to those who graduate from Vermont state colleges and universities with nursing degrees — and agree to stay in the state.

A far more modest proposed investment of $150,000 to attract New Americans to Vermont and help them resettle in the state won the biggest applause of the day.

“These efforts not only benefit our state, they also signal we’re committed to the values this nation was built on: that America is still a land of opportunity for all who seek freedom from oppression, security for their families or, in some cases, just a fresh start,” Scott said. “As long as I’m governor, they’ll be welcome right here in Vermont.”

At the press conference later Tuesday, Johnson said she was “very grateful” for that commitment, adding that it upheld the Vermont tradition of “welcoming people coming in and making this a safe home where anyone has opportunity.”

In addition to attracting workers, Scott told the joint assembly that the state must come up with new ways to keep large businesses from leaving Vermont. To that end, he proposed providing up to $3 million worth of incentives to so-called “anchor employers” with workforces of more than 100. They would be eligible if they invested at least $20 million in capital expenditures and committed to maintain unspecified payroll levels.

Scott also made the case that Vermont’s economic prosperity required a focus on each of the state’s 14 counties. “That’s why this budget includes more investments in downtowns and regional economic centers, and tools to help employers survive and create more good-paying jobs,” he said.

Those include $1.4 million more in downtown and village tax credits, $1 million for rental housing rehabilitation, $750,000 for the Working Lands Enterprise Initiative, and an expansion of the state’s tax increment financing districts. Scott said he also hoped to devote another $1 million to tourism and marketing.

“Let’s couple the most beautiful state in the nation with an increased investment to remind the 70 million people who live within a six-hour drive that we’re not only a great place to visit but also to live, work, play and, hopefully, invest in,” he said.

In Tuesday’s speech, Scott highlighted two specific local projects he hoped to fund in an adjustment to the two-year capital bill: $1.5 million to revitalize downtown Newport, which has been hit hard by the EB-5 scandal, and $2.8 million to leverage another $11.3 million in federal funding to complete the Lamoille Valley Rail Trail.

The latter proposal particularly appealed to Senate Minority Leader Joe Benning (R-Caledonia), whose district would benefit from it. “Every community along that line from St. Johnsbury to Swanton has a golden opportunity to advance their own economic development without the state putting a whole lot of money into it,” he said. Scott also outlined a series of initiatives he said would help the most vulnerable and improve health outcomes.

By investing $1 million in a newborn home visiting program, he said, the state could support the families of a quarter of the babies born in Vermont each year. Another $575,000 would go to suicide prevention initiatives and $600,000 would fund a pilot “mobile response and stabilization service” in Rutland to help children and families in distress.

One proposal Scott went out of his way to oppose Tuesday was the legislature’s paid family leave bill, which cleared the Senate last week. “I hear every day that one of the major hurdles to staying or relocating here is the affordability of life in Vermont,” he said. “This includes taxes and fees. That’s why I cannot support a new $29 million payroll tax on working Vermonters.”

At the same time, Scott noted that his administration had recently negotiated a paid family leave benefit with the Vermont State Employees' Assocation. That struck Ashe, the Senate president pro tem, as inconsistent.

Nearly two weeks after climate protesters interrupted his State of the State address, Scott told lawmakers he was “committed to meeting our greenhouse gas emission goals” — but he made clear he would do so “with incentives and innovations, not penalties or barriers to growth.”

Scott again pledged money to electric vehicle incentives and charging stations, and he proposed new investments in electric grid optimization. He suggested that 25 percent of future revenue surpluses be dedicated to combating climate change rather than squirreled away in the state’s “rainy day” reserves.

“I’m glad to hear the governor put climate on the table as a problem and put it on the table as something he’s willing to work with us to try to solve,” she said. “I just want to make sure that it’s a real expansion of our efforts and not just rebranding what we already do.”

According to Zuckerman, who has criticized Scott for failing to do more to fight climate change, “He still didn't really address it as an economic opportunity the way that I think it presents itself.”

Benning, on the other hand, appeared pleased with the governor’s approach to the issue. “The climate activists are full of passion, but we are a very small state and with very small resources, so doing what we can is important, but there will always be a segment that says we are not doing enough,” he said.