The protesters sat quietly during the first several minutes of the governor's speech before standing and loudly chanting for action against the threat of climate change.

"We demand a people's assembly needed to achieve a just transition," they yelled — interspersing a refrain of "listen to the people" — "because we are unable to trust the government to do so!"

Scott waited while the demonstrators chanted for several minutes. He then returned to the microphone and tried to speak. The protesters were not finished, however, and resumed their chants.

Lt. Gov. David Zuckerman then called for the protesters to quiet down, and when they refused, he called a recess. Police then began escorting the demonstrators out of the chamber, and Scott delivered his address to the legislature.

The protest followed another climate demonstration outside the Statehouse on Thursday morning.

Vermont State Police spokesman Adam Silverman said that agency assisted Capitol Police Department officers and county sheriff's departments in the House chamber. One person, Henry Harris, 41, of Peacham, was arrested on suspicion of disorderly conduct. He was due in court in Barre on a future date.

The others were released and given verbal no-trespass orders, Capitol Police Chief Matthew Romei said, meaning simply that they were ordered from the Statehouse for the day. Police simply took the minimum steps necessary to restore order, he said. 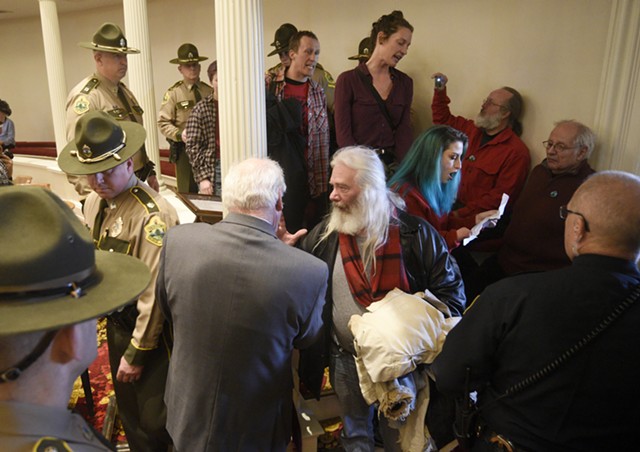