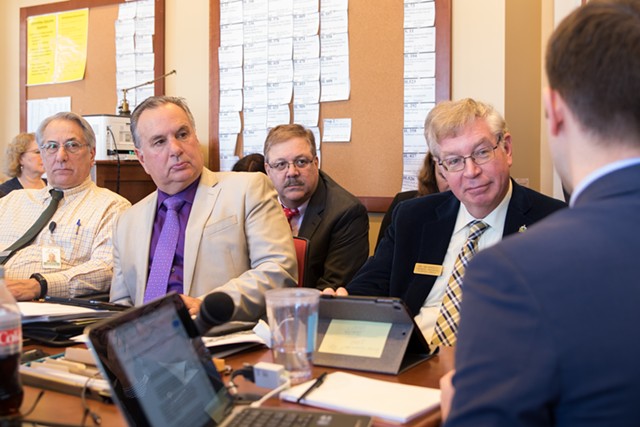 Vermont lawmakers are taking a fresh look at the state's public records law after a recent Supreme Court ruling sparked a disagreement among some top government officials.

Issued last September, the 3-2 decision found that government agencies can charge members of the public for copies of records, but they cannot charge people for merely viewing the records.

Some officials — including Gov. Phil Scott and Attorney General T.J. Donovan — have interpreted the decision differently, prompting lawmakers to consider whether they need to "clarify" the legislature's intent of the public records law.

"This is more than just about one office or one agency or one department," Rep. Sarah Copeland Hanzas (D-Bradford) said during a Thursday hearing before the House Committee on Government Operations, which she chairs. "This is intended to be a look at what, if anything, do we think needs to be done to clarify the public's right to access the operations of its government."

Donovan instituted a new policy following the ruling that said those who use their own personal devices to take photos of records while reviewing them are essentially requesting copies and should have to pay.

Vermont Supreme Court Sides With Burlington Man in Police Video Case
By Sasha Goldstein
Off Message
"If you want to inspect records, have at it," Donovan told Seven Days last year. "But if you want to copy them, per the Supreme Court's ruling, there will be a charge assessed based on the staff time and other type of resources expended to get those records ready for inspection."

But Gov. Scott, Secretary of State Jim Condos and various media organizations disagreed with Donovan's stance, arguing that the ruling clearly confirms that the government cannot charge members of the public for inspecting records — even if they snap a picture.

Condos told legislators on Thursday that Donovan's take was a "a twisted interpretation" of the law and the Supreme Court decision. The Public Records Act mentions that fees should only be charged for “actual costs,” Condos noted.

Raising a piece of paper, he mimicked taking a photo of it and asked, “What is the cost to the government?

“Zero,” he continued. As for the costs incurred to prepare the records, Condos said, “That’s a burden of government. It should not be a burden on our citizens.”

Scott, Condos Break With Donovan Over Charging for Public Records
By Paul Heintz
Off Message
Anne Galloway, founder and editor of VTDigger.org, agreed. She pointed to recent media stories — including VTDigger's coverage of the EB-5 scandal and Seven Days' exposé on the Vermont prison system — as examples of how "corruption in state government continues unabated" when agencies block access to records, whether through outright denials or exorbitant charges.

"When we err on the side of transparency, a whole lot can be solved," said Galloway, who testified on behalf of various media organizations under the banner of the Vermont Journalism Alliance, which includes representatives from Seven Days.

Galloway submitted a proposed bill that would codify the Supreme Court's ruling and told legislators that it is time that the state "take a moral stand on this issue."

Charity Clark, Donovan's chief of staff, explained the AG's position before the House committee on Thursday. She said the office is not taking any formal position on a potential bill at this time.

House Gov Ops is not the only legislative committee considering whether to clarify the law.

Sen. Jeanette White (D-Windham), who chairs the Senate Committee on Government Operations, told Seven Days last month that she had asked legislative counsel to draft a bill that would allow agencies to charge for the staff time it takes to comply with requests, regardless of whether the person requesting the material copies the documents.

“I thought that was very clear but apparently the Supreme Court didn’t," White said.

She said this week that she would no longer pursue the bill. Instead, White's committee plans to take testimony from all interested parties and would consider drafting its own bill.
Prev
Next