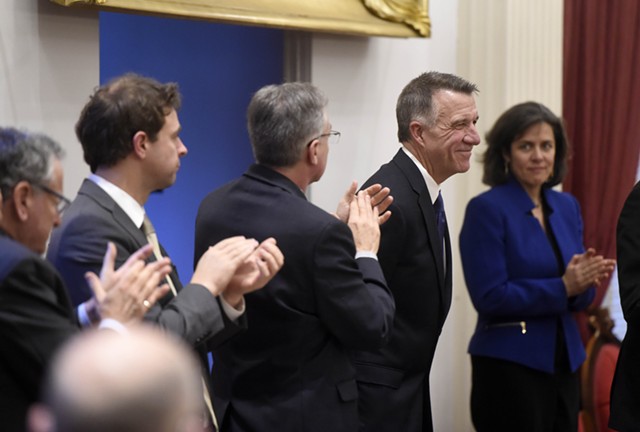 On a day when Vermont Gov. Phil Scott sought to portray the state as strong and its future bright, climate protesters painted a far bleaker picture.

Wearing red shirts and holding “Climate Action Now!” banners, the protesters listened to Scott for less than a minute before they stood and began shouting slogans about the importance of responding to climate change.

“Climate change means famine in Vermont!” the protesters screamed from the back of the House chamber.

Scott, who was aware the protesters were likely to disrupt the speech, stood patiently at the dais. He attempted to break in after five minutes or so, but the protesters continued. 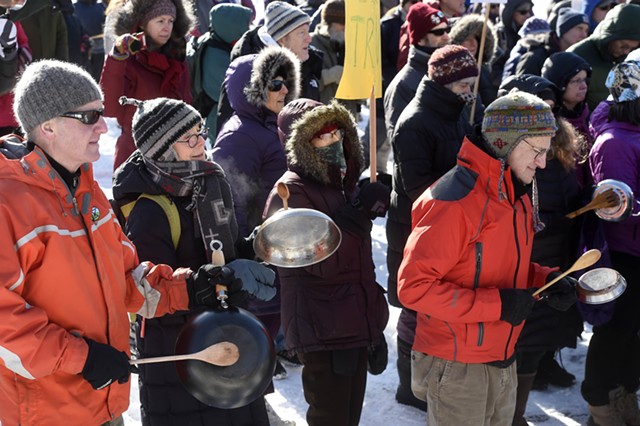 Finally, he asked the 150 members of the House and 30 senators assembled: “Have we had enough?”

“Yes!” many of them replied, and they broke into applause.

Lt. Gov. David Zuckerman then called a recess. About a dozen state troopers strode single-file into the chamber and joined capitol police in leading the protesters from the House chamber.

“We’re calling on everyone to help!” yelled one of the last to be escorted out.

Police detained 16 activists, and Scott returned to his prepared remarks. The protesters were later released. One was cited to court on a suspicion of disorderly conduct charge. The others were told to keep out of the Statehouse for the rest of the day.

Among them was 14-year-old Montpelier resident Neah Clammer, who said she joined the demonstration because she's concerned that climate change could bring humanity to the brink of extinction within her lifetime.

"I have a right to a future," Clammer said. Asked what message she wanted lawmakers to take from the protest, she replied, "I hope that they listen to the people."

“After a protest like that, I thought it was ironic to have the climate portion of the speech be kind of a laundry list of some of the things we did last year,” said Rep. Selene Colburn (P-Burlington).

Instead of proposing something such as an electric bus as a solution to climate change, Rep. Diana Gonzalez (P-Winooski) said, Scott should embrace more impactful solutions, like getting more people to ride the buses the state already has.

Scott, a self-described “car guy” who races stock cars, marveled at the new models of electric cars being introduced, including a 450-horsepower electric Ford Mustang. While he cited the $1 million already earmarked for electric vehicle purchase incentives, Scott again made it clear he opposes climate initiatives that are effectively a tax on carbon.

He cited seniors who have to heat their homes and working poor who drive long distances and “struggle to fill their gas tanks.”

“I simply cannot support proposals that will make things more expensive for them,” Scott said.

“There were no new initiatives in the address that I’m aware of,” Senate President Pro Tempore Tim Ashe (D/P-Chittenden) said of Scott’s climate proposals.

House Speaker Mitzi Johnson (D-South Hero) said she never really expects the State of the State to contain much substance. That comes when the governor explains in his budget address how he intends to accomplish his goals, she said.

But even by that measure, Johnson said, she heard little more in the speech than “expanded initiatives on a couple of existing things.”

“This one spent a little time in the rearview mirror more than others,” Johnson said. “I found that interesting.”

One concrete proposal would create a “universal after-school network” of enrichment programs that would align students’ days with those of their working parents. Scott said a similar program in Iceland has shown positive outcomes for young people.

“Kids who participate in after-school activities and programs do better in school and in life than kids who don’t,” Scott said.

“I have concerns about starting a new program like that without addressing the underlying problem of the education finance funding system,” she said.

Scott said he shared concerns about the tax burden on Vermonters, and said he planned “additional targeted tax relief” in his budget. He did not elaborate.

Much of Scott’s speech touched upon themes he has addressed for years, such as the “demographic crisis” of people leaving Vermont and the rural-urban divide in the state.

“Think about this: Of the five towns that have seen the most growth in recent years, four of them are in Chittenden County,” Scott said. “Of the 180 legislators in this room, 106 of you come from counties that have lost workers.”

Scott cited the success of the state’s remote worker program, which has paid 371 workers up to $10,000 each to move here. He also pledged to do more to increase job training.

He also reported progress on building new housing, crediting the $37 million housing bond passed in 2017 with helping spur the building of nearly 800 units.

He expressed optimism that Act 250 can be updated this session in a way that supports his vision for reinvigorating downtowns. He also heaped praise on Vermonters who serve their communities, such as those who staff the Ludlow Fire Department; drive innovation, such as electric aircraft entrepreneur Kyle Clark; and care for others, such as Marjorie Meyer, a doctor treating women with opioid dependency.

“So even as we face major challenges, these Vermonters show that in the hands of our people, doing all they can every day, the state of the state is strong,” Scott said.

Despite his focus on these and other issues, the climate concerns largely upstaged Scott’s positive vision of the state.

Protestors gathered outside the Statehouse in the hours leading up to his address for a loud and visual demonstration. Speakers urged lawmakers to take bolder action, and attendees clanged pots and pans in agreement.

One group of protestors dressed in long, flowing layers of red. The purpose: to provoke an emotional response, said Candace Jensen of Putney, a member of Extinction Rebellion, which organized the protest.

“They represent the blood spilled by beings all over the world who are being killed in the climate crisis and environmental degradation,” Jensen said.

Also in attendance were the Climate Queens. Among them was Dummerston resident Juliet Cuming. As the self-proclaimed "Queen of the Frozen North," she wore a white crown and carried a long birch walking stick. She described the protest as the "ultimate State of the State address."

“We feel that this is where the climate is being talked about appropriately," Cuming said. "Phil Scott is not necessarily a friend of the Climate Queens."

Another protestor, Hannah Morgan, listened to speakers with her 11-month-old son bundled on her chest. Asked why she felt compelled to attend, she pointed down.

“For him, and the sake of his future, and the feeling that we're out of time to be deliberating," she said.