In Report to Governor, Smith Proposes Prison Reforms | Off Message 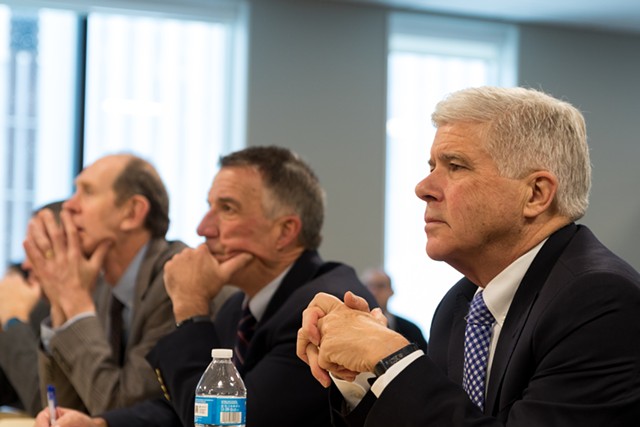 In a report to Gov. Phil Scott, Secretary of Human Services Mike Smith has proposed expanding state law to criminalize sexual relationships between Department of Corrections employees and those on probation, parole and furlough.

The report, which was delivered to the governor on Friday and released to the public Monday, includes several other recommendations to reform Vermont's troubled prison system. Smith called on the legislature to require drug testing for all corrections officers, and he said the state must reform the way it investigates employees accused of misconduct.

The secretary took particular aim at the state's practice of reaching confidential agreements with those accused of wrongdoing and shuffling them to other positions with similar pay. "While a settlement may be more expedient or limit financial liability to the state, there are clearly deeper repercussions," Smith wrote. "This practice needs to stop."

Smith penned the report in response to a Seven Days investigation into sexual misconduct, drug use and retaliation at the Chittenden Regional Correctional Facility, a South Burlington prison that houses the state's 135 female inmates. In that story and in subsequent reporting, Seven Days found that inmates and officers repeatedly reported wrongdoing, but state officials did not always take action.

"DOC has been working to develop a culture of continuous improvement," Smith wrote. "Clearly, these cases indicate the state must do more, faster and better, to support the work and hold people fully accountable. We cannot shirk our responsibility to address culture change."

Smith's report to Scott is the first of what could be several probes of the state prison system. The secretary said he was hoping to engage an outside law firm by the end of the week to conduct a third-party investigation of the situation. That four-month review would focus on Chittenden Regional, Smith wrote, but could also include broader recommendations.

The federal Department of Justice and the state legislature may also conduct their own investigations.

Guarded Secrets: Claims of Sexual Misconduct, Drug Use Plague a Vermont Prison for Women
By Paul Heintz
Prisons
The prison scandal has already resulted in personnel changes at the Department of Corrections. Last Wednesday, Smith announced that Corrections Commissioner Mike Touchette had resigned and would be replaced by an interim leader through the course of the third-party review. Until the interim commissioner is installed, Deputy Commissioner Judy Henkin will continue overseeing Chittenden Regional from the secretary's office.

In recent weeks, Smith has also made changes to the manner in which inmates and staff can report wrongdoing to the appropriate authorities. In his report, Smith said that the department has entered into a temporary agreement with Just Detention International, a California-based advocacy group, to provide a crisis support hotline for inmates.

The report recommends at least two changes to state law. The first would address Seven Days' finding that multiple DOC employees engaged in or pursued sexual relationships with former inmates who were still under the department's supervision.

"The allegations described in the Seven Days report outline various incidents that should be criminal in nature," Smith wrote. "However, the law around the sexual assault of an inmate is incredibly narrow."

Statute currently prohibits DOC employees from engaging in "a sexual act" with an incarcerated prisoner or with a former inmate they currently and directly supervise through the probation and parole system. "This is very limiting language and potentially inhibits the ability to prosecute a DOC employee for engaging in the exact conduct the public policy behind the statute is designed to protect against," Smith wrote.

He recommended broadening the statute to ban most or all relationships between those employed and supervised by DOC. Department rules already forbid such relationships, unless they predate an inmate's incarceration.

After Seven Days reported that a supervisor at Chittenden Regional appeared to have routinely run the facility while intoxicated, both Scott and Smith said that they would seek regular drug testing of DOC employees. In the report, Smith wrote that such a change in policy could require a new agreement with the Vermont State Employees' Association, the union that represents DOC staffers.

"A more expeditious route to implement drug testing would be if the legislature were to pass legislation requiring it for all correctional officers," Smith wrote.

The secretary acknowledged that the department has been chronically understaffed, leading to an "ever-growing amount of overtime being paid each year." He also said the state should consider higher standards for corrections officers. He did not propose recommendations to address those findings.

Though much of Smith's report focused on the Department of Corrections, which is part of the Agency of Human Services, the secretary also questioned how the Department of Human Resources conducts investigations of employee misconduct throughout state government. "The current personnel system does not promote transparency, which protects poor performance and hides misconduct behind policy," he wrote.

Rules governing confidentiality of personnel records make it difficult for victims of misconduct and members of the public to discern whether perpetrators have been punished, Smith argued. "We must also find a way to provide confidence in the system — that when someone reports something, they believe it will be investigated and appropriately resolved," he wrote.

Smith acknowledged that his report, which was assembled in a little over two weeks, was "not a thorough investigation of what has transpired." But, he said, "it does provide steps we propose to begin to correct the challenges our corrections system faces."

Smith's full memo to the governor is here: