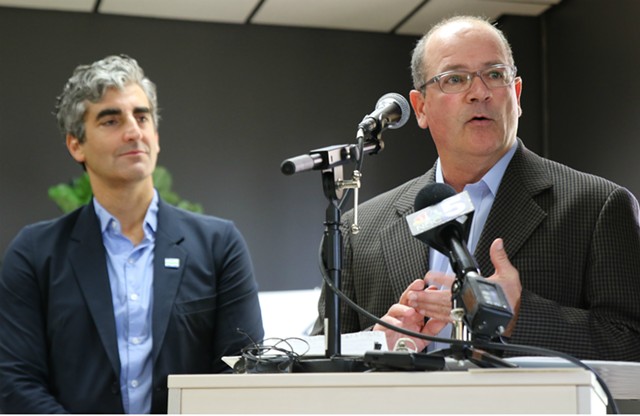 Burlington Telecom will invest $3 million in the local tech economy over the next 10 years to boost startups and nonprofits in Burlington.

The telecom's general manager, Mike Loucy, made the announcement Tuesday at the kickoff for the fourth annual Innovation Week, a series of events hosted by BTV Ignite that celebrate Burlington’s tech businesses.

“Depending on how well that goes, it could endure past that,” Loucy said at the Vermont Center for Emerging Technologies office on Main Street. “But that's our commitment out of the box, just to see how it works."

The Community Investment Funds were one of several incentives promised by BT's buyer, Schurz Communications, during contentious negotiations with the city. The Burlington City Council selected Schurz's $30.8 million bid to purchase the city's telecom in 2017, but the sale was only finalized this past March. A group of community activists have sued over the sale, arguing that the terms don't provide the greatest return to taxpayers.

Vermont Supreme Court to Hear Burlington Telecom Case
By Courtney Lamdin
Off Message
The money will be funneled into two separate pots. The Burlington Telecom Innovation Fund will invest $250,000 a year in a Burlington company in the startup or growth phase, and the STEM & Technical Skill Fund will provide a $50,000 annual grant to a nonprofit or similar organization that promotes technical education and workforce development.

“Even though Burlington Telecom is not a city department anymore, it is continuing to move the community forward in numerous ways,” Mayor Miro Weinberger said. “This is an exciting example of that."

The innovation fund will be disbursed at the direction of an Investment Committee, a group of seven entrepreneurs that was established through the BT sale process. Priority will be given to businesses led by women, people of color and those with disabilities.

“This isn't just the usual suspects getting funded,” Weinberger said. “We'll look back in a decade and really see that this has moved the needle in important ways."

BT will retain some equity in the selected companies in return for its investment, but the committee has not determined what percentage, Loucy said. It will ideally start accepting applications by December, he added.

The BTV Ignite board will open the STEM grant competition on October 15. Applications will be accepted through November 27, according to its website. The award could be split between more than one entity each year; winners should be announced before year’s end, according to BTV Ignite project manager Adam Roof.

The announcement marked Loucy’s first public appearance since he was named BT’s president and general manager in May. He most recently worked at the Vermont Electric Power Company in Rutland for 10 years as a senior manager focusing on business development and VELCO’s fiber optic network, according to a BT press release. He also worked for Unicel and Sprint.

Loucy replaces Stephen Barraclough, who had served as the telecom’s GM since 2010 and is largely credited with improving BT’s financial standing.

"It will give incentive to new startups that are like, ‘Where can I start right out of the box?’ It doesn’t have to be somebody established,” Loucy said. “That’s really the goal of both of these funds: Have a nice, diverse group.”
Prev
Next