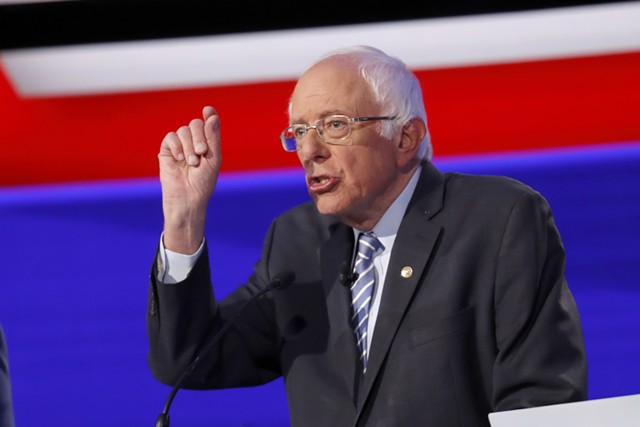 Two weeks after a heart attack sidelined him from the presidential campaign, Sen. Bernie Sanders (I-Vt.) made clear Tuesday night that he was ready to get back in the game.

Throughout a three-hour Democratic debate in Ohio, the senator from Vermont appeared energetic, forceful and on-message as ever. If there were doubts that he could perform under pressure after such a major medical event, he put them to rest — at least, for now.

“I’m healthy. I’m feeling great,” Sanders said as CNN anchor Erin Burnett attempted to change the subject from opioid-industry abuses to the senator’s own health. “But I would like to respond to that question.”

Only after linking pharmaceutical companies to fossil fuel companies and the perils of “unfettered capitalism” would Sanders address Burnett’s original question: How would he prove to voters that he was “up to the stress of the presidency?”

“We are going to be mounting a vigorous campaign all over this country,” he responded, plugging a “Bernie’s Back” rally this Saturday in Queens, N.Y. “That is how I think I can reassure the American people.”

Even before he left the debate stage, Sanders’ campaign confirmed a Washington Post report that Rep. Alexandria Ocasio-Cortez (D-N.Y.), a darling of the progressive movement, would endorse his candidacy and join him at the rally in Queens. Later Tuesday night, the campaign announced that Rep. Ilhan Omar (D-Minn.) would also endorse him.

Sanders’ solid debate performance and news of the endorsements appeared likely to kick-start a campaign that, in recent weeks, had been grappling with the rise of Sen. Elizabeth Warren (D-Mass.) and questions about Sanders’ health.

Evidence of Warren’s perceived ascendance was everywhere in Tuesday’s debate. Other candidates trained their fire on her, rather than on former vice president Joe Biden, and she spoke far more frequently than any of her rivals. According to a count by the New York Times, which cohosted the debate with CNN, Warren had nearly 23 minutes in the spotlight, while Biden had just 17 minutes.

Sanders, who spoke for roughly 13 minutes, disappeared from the dialogue during the second hour of the debate, when its moderators moved to foreign policy and gun control. But he landed several forceful lines in the first hour, which focused on issues in his wheelhouse, such as health care and tax policy.

After Biden argued that his Medicare-for-all proposal would raise taxes on most Americans, Sanders said he was “a little bit tired” of people defending what he called a cruel and dysfunctional system.

“I will tell you what the issue is here: The issue is whether the Democratic Party has the guts to stand up to the health care industry, which made $100 billion in profit; whether we have the guts to stand up to the corrupt, price-fixing pharmaceutical industry, which is charging us the highest prices in the world for prescription drugs,” Sanders said. “And if we don’t have the guts to do that — if all we can do is take their money — we should be ashamed of ourselves.”

Later, when Biden said that he was “the only one on this stage that has gotten anything really big done,” Sanders was quick to respond.

“Joe, you talked about working with Republicans and getting things done,” he said. “But you know what you also got done? And I say this as a good friend. You got the disastrous war in Iraq done. You got a bankruptcy bill, which is hurting middle-class families all over this country. You got trade agreements, like NAFTA and PNTR, with China done, which have cost us 4 million jobs.”

Sanders, it seemed, was ready to fight.
Prev
Next