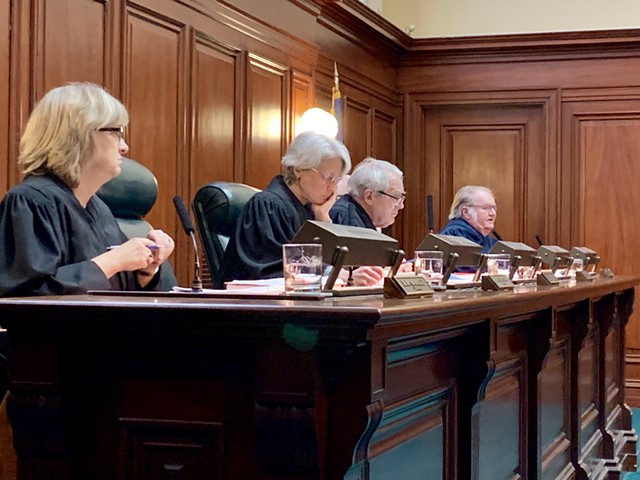 The Vermont Supreme Court ruled Friday that foreign investors who lost hundreds of thousands of dollars each in a fraudulent development scheme can sue the state and two of its former employees for failing to oversee the projects.

The unanimous decision, authored by Associate Justice Beth Robinson, reverses portions of a lower court ruling that, in April 2018, dismissed the lawsuit. The high court's decision means the case can proceed against the state Agency of Commerce and Community Development and two men who ran its EB-5 investor visa program, James Candido and Brent Raymond.

At issue is whether the state bears responsibility for a $200 million fraud allegedly perpetrated by Jay Peak Resort owner Ariel Quiros and several of his business partners. In 2016, federal authorities accused them of operating a "Ponzi-like" scheme and, in May, filed criminal charges against them.

In a June 2017 lawsuit, Tony Sutton and other project investors argued that the state was complicit in the fraud — or at least negligently enabled it. Sutton and the others invested in the developments through the federal EB-5 program, which provides green cards to those who contribute at least $500,000 to qualified projects. In an unusual arrangement, the state operated the "regional center" charged with overseeing Vermont-based EB-5 developments, which made them more attractive to potential investors.

In Friday's ruling, the Supreme Court found that Sutton and his peers could sue the state for negligence, negligent misrepresentation, breach of contract and failure to act in good faith. It also ruled that Candido and Raymond, who successively ran the regional center but are no longer employed by the state, could be sued for gross negligence.

The court did not weigh the merits of the plaintiffs' claims, but it noted that the state had told investors that it regularly reviewed the Jay Peak projects to ensure their compliance with the law and their financial viability. "Plaintiffs reasonably relied on these statements by [Agency of Commerce] employees in investing in the Jay Peak Projects," the court wrote. "Unbeknownst to the investors, but known to the [regional center] officials, no such state oversight by the [regional center] existed."

The investors named half a dozen agency officials in their lawsuit, but the Supreme Court agreed with the lower court that most of them could not be sued. Former agency secretaries Lawrence Miller and Patricia Moulton were immune, the court found, by virtue of their roles near the top of state government. The investors failed to show that two others named in the suit, Eugene Fullam and John Kessler, engaged in negligent conduct, according to the court.

But the Supremes found that the conduct the plaintiffs alleged Candido and Raymond engaged in — including misrepresentation of the extent of the regional center's oversight — could qualify as gross negligence, if proven in court.

Neither Candido nor Raymond immediately responded to requests for comment.

Attorney General T.J. Donovan, whose office represented the state, said in a statement that he was pleased the court upheld the dismissal of some claims. "The State looks forward to litigating the remaining claims and is confident the evidence will show that all the claims against the State and its employees must be dismissed," Donovan said.

In a separate decision issued Friday, the Supreme Court ruled that the same investors could not intervene in a state civil suit against the Jay Peak developers, which has since been settled, because they took too long to lodge their request. Earlier this week, the state disclosed that the federal government had upheld its decision to shut down Vermont's EB-5 regional center.
Prev
Next