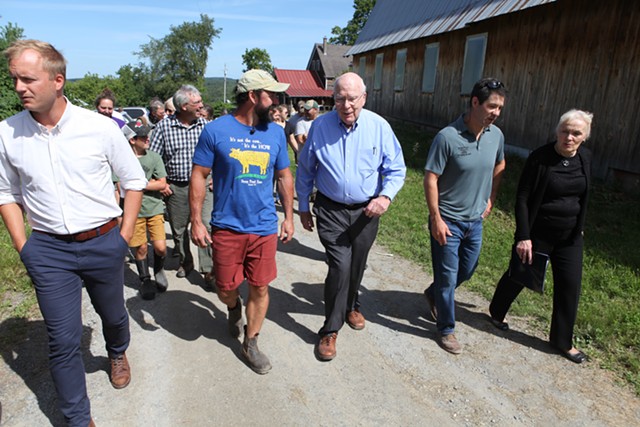 On a visit Tuesday to Stony Pond Farm, a 60-head organic dairy in Fairfield, Leahy said the growth of the organic food market into a $50 billion industry had attracted massive producers that don’t necessarily share the values epitomized by Vermont’s organic family farmers.

“Factory-scale farms want a piece of the action. They want to cut corners. They want to erode the true intent of organic farming,” Leahy said. “They are flooding the market with cheap alternatives.”

The ranking member of the Senate Appropriations Committee vowed to head back to Washington to close loopholes in the 1990 Organic Foods Production Act that he helped author.

The landmark law gave the United States Department of Agriculture control over which food products could be labeled as organic. The federal system was meant to bring consistency to the patchwork of independent certification organizations that some argued became confusing to consumers.

But specific organic regulations can be open to interpretation. These include regulations requiring organic dairy cows to spend at least 120 days on pasture and receive at least 30 percent of their dry food from pasture each year. Another rule, called the “origin of livestock rule,” deals with how and when conventionally raised cows can come to be considered organic.

Inconsistent interpretation of the rules “has allowed the largest producers to abuse loopholes, and grown beyond what should be possible,” Leahy said. 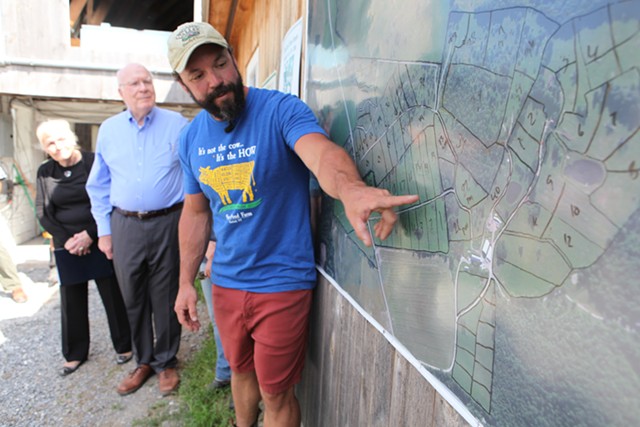 The owner of Stony Pond Farm, Tyler Webb, took Leahy and reporters on a tour of the 300-acre farm he runs with his wife, Melanie, and their two children. The cows, mostly Jerseys, are 100 percent grass fed, which Webb says increases the fat content of the milk he sells to Organic Valley, the largest organic cooperative in the state.

Webb started raising beef cows on the property in 2001 and added the dairy in 2007. The operation maximizes the cows’ time on pasture and uses sustainable manure management practices that limit runoff. The couple has expanded the farm to add a rental property to diversify their income.

One of the biggest challenges is the oversupply of organic milk on the market. This is directly attributable to the lax enforcement of organic rules, allowing mega-dairies to exist in Texas, Colorado and Missouri, he said. 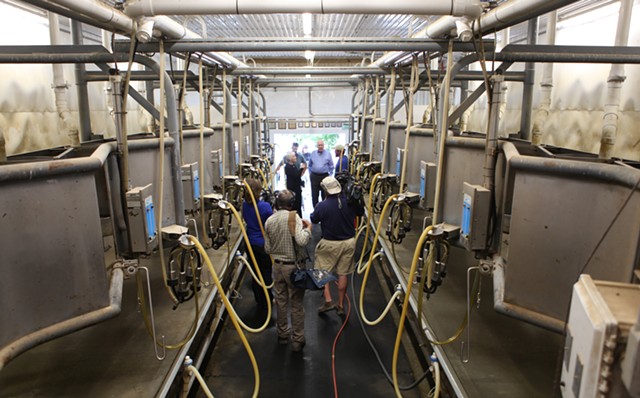 Over the last three years, the amount that Organic Valley pays him for milk has dropped from $37 per 100 pounds to $32. The co-op also has had a quota in place capping his production at 750,000 pounds annually, he said.

Webb agrees with the cap to support prices, but being unable to increase production to offset lower prices has been painful.

Webb said he was grateful that Leahy took the time to visit the farm, and for his pledge to ensure that consumers are getting what they pay for.

Some organic certification organizations have interpreted the origin-of-livestock rule to allow some dairies to regularly purchase conventionally raised calves and then “transition” them to organic feed before they start milking, said Nicole Dehne, a certifier with Vermont Organic Farmers.

The rule was intended as a way for existing conventional dairies to become organic and remain organic, Dehne said.

But large industrial farms have used that rule as a loophole to “continually transition” conventionally raised cows as a way to grow and replace their organic herd, she said.

Vermont Organic Farmers certifies all 190 organic dairy farms in the state. They are part of a total 725 Vermont dairy farms — a number that has been sliding for decades. “It’s significant because it’s just one more factor that is contributing to the oversupply of cheap milk,” Dehne said of the loophole. “It’s not everything, but it seems big.”

A 2018 report by the Wisconsin-based Cornucopia Institute contends that such dairies “are violating the spirit and letter of the law” by adding conventionally sourced animals to the herd.

“Instead of raising their young calves, these operations instead purchase cheaper cattle raised on medicated milk replacer that includes antibiotics and, potentially, other banned pharmaceuticals and substances,” the report claims. “Then, after weaning, these calves are fed conventional GMO grains and hay treated with toxic chemicals.”

Webb estimates that it costs him $900 to raise a calf organically. If large farms can buy conventionally raised calves for a fraction of that cost and then also get around rules requiring 30 percent of feed from pastures, farms like his won’t be able to compete.

“We have seen operations birth the calves organically on the farm, move it off the farm, raise it conventionally, then re-transition it back into their operation,” Warthesen said.

There was a move in 2015 to require the USDA to clarify the origin of livestock rule, but it was never implemented by the Trump administration, said Ed Maltby, executive director of the Northeast Organic Dairy Producers Alliance.

With broad support from consumer, dairy industry and agriculture groups, and people like Leahy, there is now a “groundswell of support” to restore the change, he said.

“We have enough pressure hold the ... USDA’s feet to the fire,” Maltby said.

For those who have been forced to retire or switch to other types of farming, “the damage is done,” Maltby said.

“For those that have been able to remain in organic dairy farming and other young people who want to be organic dairy farmers, we want to ensure the regulations are in place and they are enforced equally across the county,” he said.
Prev
Next