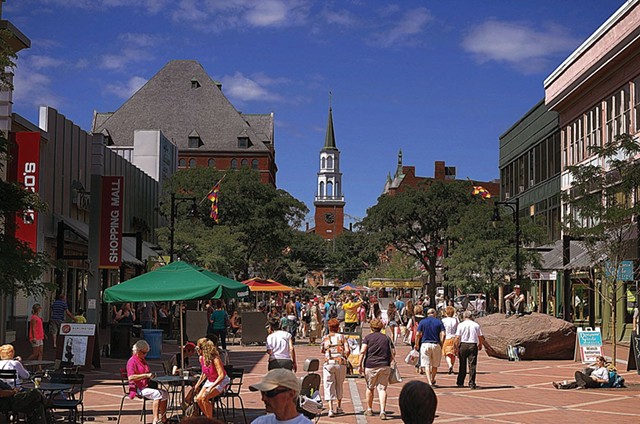 Update, 9:40 p.m.: The Burlington Public Works Department wrote on Twitter that "services are beginning to be restored on Church St."

A leak has knocked out gas service to most Church Street, Burlington businesses in the middle of the dinner rush hour, Vermont Gas officials confirmed Friday evening as Labor Day weekend kicked off.

S.D. Ireland construction workers accidentally hit a gas line on St. Paul Street between King and Maple streets around 3:30 p.m., city Public Works director Chapin Spencer told Seven Days. Crews were excavating to build a sidewalk as part of the ongoing street reconstruction project  when they broke the line, he said. No one was injured.

Vermont Gas responded and shut off gas service to repair the line, company spokesperson Beth Parent said. After repairs, crews will visit each customer and reset their service before the gas line is fully restored. That could take several hours, Parent said after 6 p.m.

"We understand and appreciate their patience," she added. "We know this is not convenient, but safety is our No. 1 priority."

Restaurants along Church Street had mixed responses to the shutoff. By 6 p.m., Leunig's Bistro & Café had closed for the night, according to server Lyndsey Hobart.

"It's not ideal for Leunig's or for anyone," she said. "It's Labor Day weekend, and it's beautiful. We were really looking forward to serving people's dinner tonight."

Down the street, Rí Rá Irish Pub was serving a limited menu, hostess Molly Swanson said. Some food options, like their signature cottage pie, can be heated without a gas stove, and the bar was open, she said.

As of 6:15 p.m., Honey Road Restaurant at Church and Main was open for business, assistant general manager Dana Parseliti said. But around 7:30 p.m., with gas service not yet restored, the restaurant decided to close for the night, according to a post on its Facebook page.

"Apologies to all!" the post read, along with the hashtag "#gasproblems."

On nearby St. Paul Street, Pizzeria Verità was open and unaffected by the gas outage, according to an employee there. Two other establishments on the street, Trattoria Delia and Sotto Enoteca, were also unaffected, she said.

Parent said the area is safe for pedestrians, adding businesses that remain open would likely appreciate some foot traffic.

"Obviously this is a frustrating situation, especially on a weekend, a beautiful Friday night in downtown Burlington," Spencer said. "We are working diligently to get this fixed as soon as possible."

The city will provide updates on its social media channels as the repairs progress, Spencer said.
Prev
Next