The sole finalist for the presidency of the University of Vermont, Suresh Garimella, was confident and cordial as he wrapped up a press conference with media on campus Thursday at the Dudley H. Davis Center. Nearby, an unhappy crowd gathered.

More than 100 students and faculty rallied to protest what they said was an undemocratic presidential search process.

They also railed against staff and faculty cuts in the humanities in response to declining enrollment and accused administrators of having an "edifice" complex that puts expensive buildings ahead of investments in teaching and learning.

Bloated administrative salaries and a "widget" mentality that looks at students as "data points" also came under fire at the rally, where protestors bemoaned a budget model they said is leading to the death of intellectualism at the school.

Current UVM president Tom Sullivan will step down this summer. In past presidential searches, three to five finalists have often been brought to the school.

University of Vermont Names 'Sole Finalist' for President Job
By Taylor Dobbs
Off Message
The fact that administrators and trustees brought only one finalist to meet with the campus community this time shows they are completely "tone deaf" to the current climate at UVM, Michael Ashooh said.

The lecturer in philosophy was one of many speakers who addressed the crowd with a megaphone on the steps of the Howe Library.

Ashooh sees Garimella's strong track record of attracting private research funds at Purdue University, where he is executive vice president for research and partnerships and a professor of mechanical engineering, as perhaps more of a liability than an asset.

"He's floated a model of corporate sponsorship" for what amounts to vocational education, suggested Ashooh.

Garimella did not attend the rally but touched on some of the issues it raised during his remarks to the media.

Enrollment in humanities courses is declining at many colleges, he pointed out, not just UVM. The solution should be driven by leaders of the UVM College of Arts and Sciences. "Look to the college to suggest how they would like to address the realities that are out there,'' Garimella said.

And as schools around the country compete for a dwindling pool of high school graduates, especially in the Northeast, it's critical to have a "clear vision" and careful budgeting strategy.

"I think that you do more with the resources you've got," Garimella said.

Purdue has managed to invest in new programs and new buildings in spite of a seven-year tuition freeze, he said. A model where tuition goes up "forever" is not sustainable, Garimella added: "I don't believe that continually increasing tuition is the answer."

As UVM enrollment and funding in science, technology, engineering and math (STEM) grows, Garimella's engineering background would appear to align with that shift.

But he said it's his administrative skills and leadership that matter most in the current job search. He added that he is committed to the humanities.

"I'm very deeply supportive of an education for students that is rich in the liberal arts, rich in the humanities," Garimella said. "It helps everyone if we can find a way to support that." 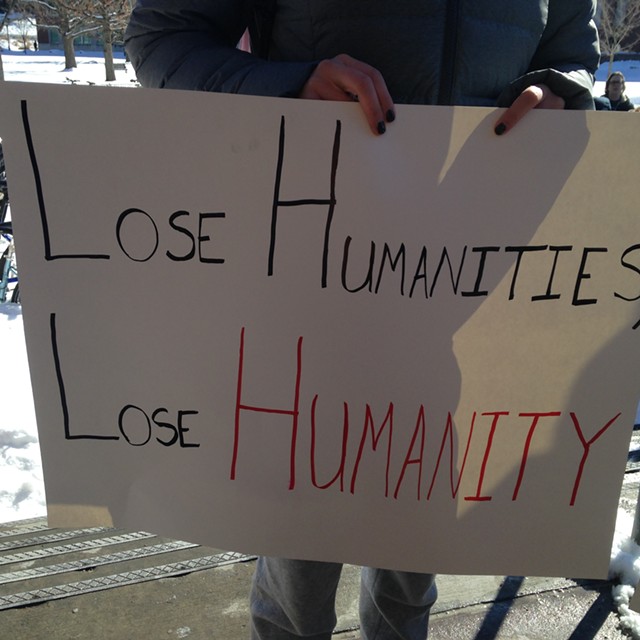 Asked about being the sole finalist, Garimella responded, "As you can imagine, I did not set the process."

He said that if there had been multiple finalists "I would not have objected," but added that more universities are going with a private search process because candidates don't want to jeopardize their chances for promotion in their existing jobs if they don't succeed in public searches at other universities.

Although protesters called on trustees not to "rubber stamp" the selection of Garimella, a decision could come soon.

The agenda for a UVM Board of Trustees meeting Friday includes discussion of the presidential search and an item authorizing board chair David Daigle to negotiate and execute a letter of appointment.

Garimella was born in India and raised in Bhopal. He earned a bachelor's degree at the Indian Institute of Technology in Madras in 1985; a master's in mechanical engineering at Ohio State University in 1986; and a PhD in mechanical engineering at the University of California at Berkeley in 1989. He is married with two children. One is a senior in high school and the other is a student at Purdue.

Thursday's rally was sponsored by the union that represents faculty, United Academics, and a group called Students for the Future of UVM.
Prev
Next