by Colin Flanders and Courtney Lamdin 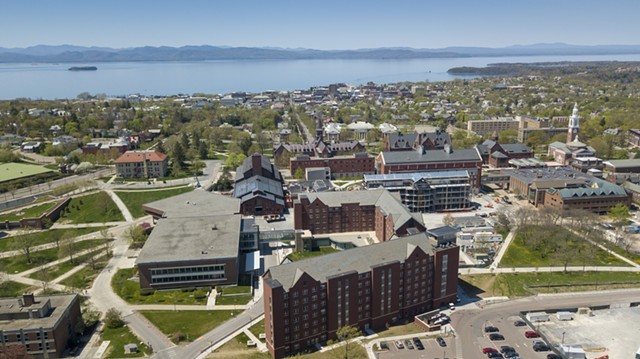 Katherine Brennan, a 21-year-old religious studies major at the University of Vermont, checked her inbox Wednesday afternoon to find an ominous subject line: “Changes in the College of Arts and Sciences.”

The six-paragraph email announced that UVM would be eliminating more than two dozen of the college’s low enrollment academic programs to address a “substantial budget deficit.” The message arrived just before one of Brennan’s classes, which, ironically, she said, was on the importance of studying religion.

“My professor had to hold class after he had just been told that his job was theoretically on the line,” Brennan told Seven Days. “He was working through all of it just as we were. All of us were shocked.”

Unveiled at a time when many students are finishing the semester from home, the dramatic restructuring plan announced Wednesday would phase out 12 majors, 11 minors and four master’s programs — or one-fifth of the college’s offerings. The impacted programs have graduated or enrolled an average of fewer than five students over the last three years, according to Dean Bill Falls, who wrote in an email to faculty that the cuts were necessary in light of the college’s unprecedented $8.6 million deficit in fiscal year 2021.

“This decision has been extremely difficult. It has been informed by data and guided by a strategy to focus on the future success of our College,” Falls wrote. “There is no other way forward for [the college] to balance its budget.”

University of Vermont President Proposes Tuition Freeze
By Colin Flanders
Off Message
It’s unclear how much money the plan would ultimately save. In an interview Wednesday, Falls said he wasn’t sure how many faculty members would lose their jobs, though he conceded there’s a “distinct possibility” that some would. Falls said even if every impacted faculty member were laid off — which he stressed he is not proposing — it would still not be enough to close the gap.

“So we need a bigger plan,” he said. “One that not only has the College of Arts and Sciences … pulling up its bootstraps to figure out how we solve this structural deficit, but one that also involves the broader university.”

The plan will soon head to the university’s faculty senate, where it will undoubtedly meet pushback. But the faculty body serves only an advisory role, Falls said, so the final decision will be up to college leaders and the board of trustees. Falls said he would consider “tweaks” based on faculty feedback but did not seem to anticipate major changes.

As it stands now, Falls' plan would terminate majors including Geology, Religion, Asian Studies and several language programs such as Greek, Latin and German. Minors in many of these subject areas would also be cut, plus others in Theatre and Vermont Studies. Master’s programs to be cut include Greek & Latin and Teaching Latin, Geology and Historic Preservation.

The plan would wipe out the college’s Classics, Geology and Religion departments. Other departments would be consolidated.

The 122 students enrolled in the 27 impacted programs would be able to complete their degrees, according to Falls. “That is a commitment we made to them, and we will fulfill that commitment,” he said.

The news shocked many faculty and staff, said Julie Roberts, the faculty union president and a linguistics professor. “The faculty senate didn’t know it was happening. The union didn’t know it was happening. Faculty were clearly not consulted. Chairs were not consulted,” she said. “It is another example of a very top-down leadership that we’ve been seeing for a while now.”

Falls said he “agonized” over not consulting with faculty but said his approach was intentional. He reflected on how he warned faculty about declining enrollments in 2018, urging them in a memo to consider consolidating departments. But after meeting for an entire academic year, a faculty committee rejected the idea, Falls said.

Oh, the Humanities: UVM Budget Model Spurs a Fight for Survival
By Molly Walsh
Education
“That really left a mark on me,” he said, adding, “When you're talking about closing majors and closing departments, it’s really, really tough to get people around the table and really deal with that because it's personal for many of them."

This time, the dean said, he confided only in several faculty members he trusts, all of whom offered essentially the same advice: Sometimes leadership means you need to make tough decisions.

"So that's where I landed," he said. "History will judge whether or not there was a way for me to be more consultative prior to this, but all my thinking was this was really the only way I could do it. I had to use a data informed process. I had to be thoughtful. And then I had to say, 'This is what I'm planning. Now let's talk about it.'"

Regardless of his reasoning, Falls' approach may have worsened tensions between university administrators and the faculty union, which have been at odds throughout the year. The two sides are at an impasse over negotiations involving contracts and pandemic-related impacts on teaching conditions. And the union has taken issue with several of the university’s recent budget cuts, particularly an across-the-board 5 percent wage reduction for non-union employees, as well as a since-scrapped plan to trim the workloads of dozens of lecturers.

Pay Cuts at the University of Vermont Spark Debate Over Inequity
By Colin Flanders
Education
University leaders argue that the moves have been necessary to address unanticipated costs brought on by the coronavirus pandemic. They say such costs have far exceeded the millions of dollars in state and federal aid the university received earlier this year.

At the same time, UVM has strived to remain affordable, announcing this fall that it would freeze tuition and room and board rates next academic year. Explaining that decision at the time, UVM President Suresh Garimella said the university was already one of the most expensive public schools in the nation, and that raising tuition would make it harder to attract and retain students when so many families are grappling with financial challenges amid the pandemic.

Roberts said the administration has acted “unilaterally,” without offering the union detailed financial information that could explain why cuts are necessary. And while she conceded that some of these programs have had low enrollments for years, Roberts feared that the cuts would endanger the university’s ability to provide a liberal arts education.

“I don’t see how this will not impact the kind of place and the kind of reputation that UVM has,” she said.

Brennan, the UVM religion senior, agrees. The Massachusetts native enrolled in UVM as a political science major but changed her focus after taking a religion course during her first year. Were it not for the religion department, she said, “I definitely would have left.”

Brennan will graduate this spring, but she still plans to fight the decision “with everything that I have,” she said. She spent Wednesday afternoon poring over the university’s budget and launched a change.org petition aimed at saving her major.

A few hours later, more than 630 people had signed on.
Prev
Next