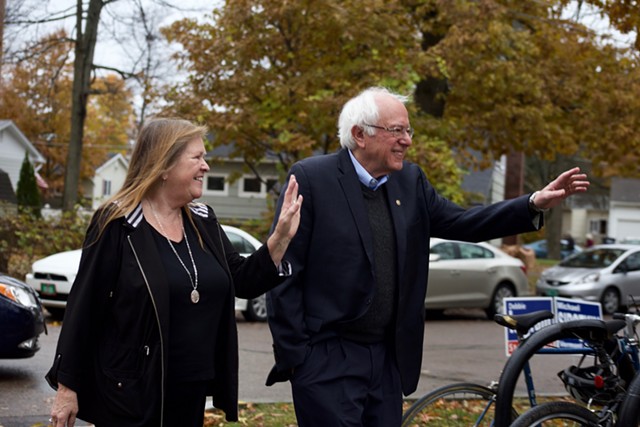 Sen. Bernie Sanders (I-Vt.) coasted to reelection Tuesday night, winning a third term to the U.S. Senate without breaking a sweat. The Associated Press called the race for him at 7:00 p.m. sharp, the moment polls closed.

Sanders, a self-described democratic socialist from Burlington, faced Republican real estate agent Lawrence Zupan of Manchester, as well as seven other candidates, in a race that never quite took off. Sanders campaigned infrequently in the state, spending much of his time stumping for Democratic candidates across the country. He agreed to take part in just one debate and one candidate forum.

At a Vermont Democratic Party gathering at the HiltonBurlington, Sanders told an enthusiastic crowd, “Being a United States senator from Vermont has been the honor of my life.”

Sanders also weighed in midterm elections throughout the country. “We don’t know what the overall election results for the United States will be tonight but what we do know is that this is a pivotal moment in American history,” he said. “And we do know that we have Republican leadership in the House and the Senate who have turned their backs on working-class people in this country.”

During a speech at the DoubleTree by Hilton in South Burlington, Zupan said he had just spoken to Sanders. “I thanked him for the campaign, and I acknowledged that the number seemed to be in his favor, and I wished him a long and peaceful, happy and healthy life, and he thanked me for a campaign well-run.”

Then Zupan launched into a familiar tirade against Sanders and his “system of socialism.”

“Emperor Sanders is not wearing any clothes,” the Republican nominee said, explaining that clothes, in this case, were a metaphor for policy ideas that could work.

“My head is unbowed,” Zupan said.

A former mayor of Burlington, Sanders was first elected to the U.S. House in 1990 and the Senate in 2006. If he serves out his next six-year term, he'll have spent 34 years in Congress.

With his reelection behind him, the 2016 presidential candidate will now consider whether to make another run for the White House in 2020. His former campaign manager, Jeff Weaver, has publicly urged him to do so and has been discussing a potential "Draft Bernie" entity to launch after the midterm elections.

Asked last Monday at a Channel 17 forum in Winooski whether he would complete his next Senate term, Sanders said he wasn't yet sure whether he'd seek the presidency again.

"The simple truth is I have not made that decision," he said. "But I’m not going to sit here and tell you that I may not run. I may. But on the other hand, I may not.”

On Tuesday night, Sanders took a shot at his potential future opponent, President Donald Trump, calling him “a pathological liar.”

“Our job is to tell this president that we will not tolerate policies which are racist and sexist and homophobic,” the senator said. “All over this country the American people, led by the state of Vermont, are going to stand up and fight back.”

During his own speech at the Hilton Burlington, Welch discussed the stakes of Tuesday’s elections. “The question is: Are we in it together or is it winner take all and you’re on your own?” he said. “That is the simple question that America is deciding across this land tonight.”

He added to cheers, “I’m getting optimistic that we are going to have a Democratic House of Representatives by the end of this night.”

Speaking at the DoubleTree, Tynio said she was “proud to say I’m conservative Republican even in a blue state” and vowed to run for office again. “I have no regrets about the campaign,” she said. “I said what I wanted to say. I did what I wanted to do.”