The Ex-Bernie Staffers Behind Beto’s Campaign | Off Message

The Ex-Bernie Staffers Behind Beto’s Campaign 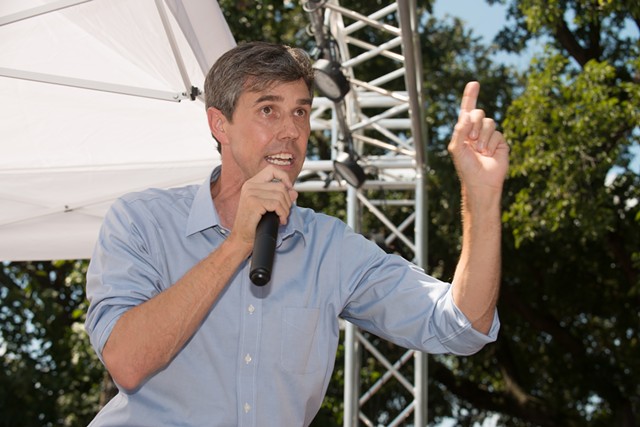 When former Texas congressman Beto O’Rourke finally announced his presidential campaign Thursday morning, an experienced crew of digital strategists was ready to make the most of the moment, through social media engagement and small-dollar fundraising.

It wasn’t their first rodeo. Many of O’Rourke’s key staffers — particularly from his online team — spent the 2016 campaign working for another crowd-pleasing populist: Sen. Bernie Sanders (I-Vt.).

At least eight former Sanderistas have decamped to O’Rourke’s campaign, according to online records. Several held top jobs on the Vermonter’s 2016 campaign before joining up with the Texan’s 2018 U.S. Senate race and 2020 presidential run.

“I have friends in both campaigns whose skills and talents I admire, but Bernie’s loss is Beto’s gain,” said Michael Briggs, who served as Sanders’ top spokesman in 2016 and who has not joined a 2020 campaign.

Among the transplants are Becky Bond and Zack Malitz, who have been credited with leading O’Rourke’s groundbreaking organizing efforts last year during his unsuccessful campaign to knock off Sen. Ted Cruz (R-Texas). In 2016, Bond served as a senior adviser to Sanders while Malitz was his deputy national digital organizing director.

Both told the New York Times last December that they were eager for O’Rourke to run for the White House. Politico reported in January that Bond was in conversations with operatives about jobs with a potential O’Rourke bid, and her name has been floated as a potential campaign manager. Malitz recently changed his Twitter profile to read “@BetoORourke for America.”

Joining them on the Texan’s presidential campaign are half a dozen Sanders alums who now run and work for Middle Seat, a digital strategy and fundraising firm that has advised such progressive standouts as Rep. Alexandria Ocasio-Cortez (D-N.Y.), Rep. Ro Khanna (D-Calif.) and Michigan gubernatorial candidate Abdul El-Sayed.

Middle Seat sprouted from the ashes of Revolution Messaging, the firm behind Sanders’ 2016 digital and fundraising operations. Its leaders — Kenneth Pennington, Hector Sigala and Elizabeth Bennett — all worked for Sanders, as did employees Aidan King, Camilo Caffi and Drew McConville.

Pennington served on Sanders’ U.S. Senate staff as deputy press secretary before becoming digital director of the Vermonter’s presidential campaign. He had a public falling out with Team Sanders over the appointment of former campaign manager Jeff Weaver to lead the Sanders-affiliated advocacy group Our Revolution.

Sigala, dubbed by Reuters “the man running Bernie Sanders’ Twitter account,” got his start as a systems administrator for Sanders’ Senate staff before rising through the ranks to become his campaign’s digital media director.

Bennett, the deputy digital advertising director of Sanders’ 2016 campaign, was an early member of O’Rourke’s 2018 team and played a key role in helping him raise roughly $80 million.

A Vermont native, King was working at Fresh Tracks Farm Vineyard & Winery when he started moderating the “Bernie Sanders for President” page on Reddit. He later joined the official campaign as social media coordinator. Caffi and McConville, both designers, joined Middle Seat by way of the Sanders campaign and Revolution Messaging.

To be sure, not all of the Sanders’ digital team has departed. The senator has signed on Aisle 518 Strategies — led by 2016 alums Tim Tagaris and Robin Curran — to lead his digital fundraising efforts. They’ve had remarkable success thus far, raising $10 million for Sanders in his first week in the race.

The Sanders campaign did not respond to a request for comment.
Prev
Next