Number of Women Headed to Vermont Statehouse Drops by One

The "Year of the Woman" didn’t upend the gender breakdown in Vermont politics. In fact, the number of female state legislators dropped from 72 to 71 after the November 6 elections.

Vermont continues to have a single female statewide officeholder — Treasurer Beth Pearce — and has yet to elect a woman to U.S. Congress.

Elsewhere in the country, a record number of women ran for, and were elected to, Congress — a trend generally attributed both to anger at President Donald Trump and to the #MeToo movement. Several races remain undecided but at least 125 women will serve in Congress, changing the makeup from 20 percent female to 23 percent, according to the Center for American Women and Politics at Rutgers University.

Cary Brown, executive director of the Vermont Commission on Women, said she's "beyond impatient" to send a woman to Congress. But she isn’t disheartened by the outcome in state legislative races because “we are starting from such a high place.” In June 2018, Vermont was tied with Arizona for having the highest percentage of women — 40 percent — in its state legislature, according to the National Conference of State Legislatures.

The Vermont Senate, which currently has 11 women, will return only 10 — all Democrats — making the body one-third female. The 150-member House is holding steady with 61 women, including 41 Democrats, 13 Republicans, four Progressives and three independents.

"I see this as a victory, but our work is far from done," said House Majority Leader Jill Krowinski (D-Burlington), who plays a key role in recruiting candidates.

Female legislative candidates did have a significantly higher rate of success than their male counterparts. While 70 percent of women won their races, only 56 percent of men prevailed. “I can’t tell you what that means,” Brown said. “It’s just very encouraging.” 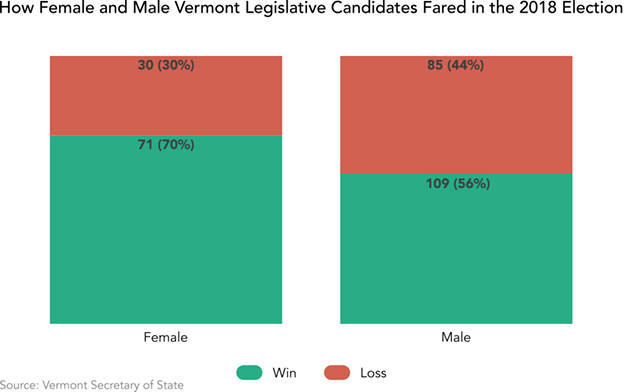 Thirteen graduates of the Emerge Vermont program claimed House and Senate seats this election, according to the organization. And Emerge's own executive director, Ruth Hardy, won an Addison County Senate seat.

“I was hoping to have a few more sisters join me in that chamber,” Hardy said, noting that the chamber is now two-thirds male. But the House results didn’t surprise her. “I thought we would come out more or less the same, in large part because we already have a fairly good representation of women in our Vermont House,” she said.

Hardy added: “We’re not at parity yet, so I don’t think we should be celebrating yet.”

Even though the ranks of women officeholders didn't expand, Hardy argued that the successful candidates played a pivotal role in the election, helping to flip several Republican seats. "Women won key races across the state and were able to help us make gains from the Democratic perspective," she said.

Hardy also highlighted the paucity of candidates of color, a deficiency made more glaring by the recent resignation of Kiah Morris, a Bennington representative who had been the only black woman serving in the Statehouse. Morris cited racial harassment as a reason for her departure.

“I think the next big thing we really need to work on as an organization and as a state is making sure we have many, many more women of color in the pipeline who are ready to be elected,” Hardy said.

Correction, November 19, 2018: A previous version of this story misstated the party breakdown of the women entering the Vermont Senate in 2019.
Prev
Next