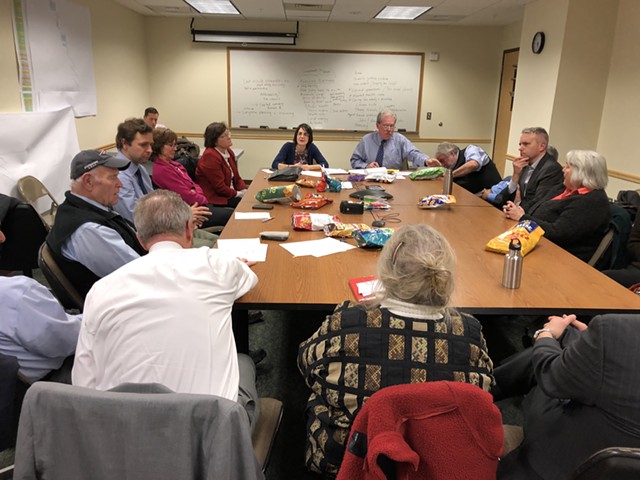 Eighteen Vermont Senate Democrats exited the Statehouse around 5 p.m. on Tuesday, crossed the street and entered a locked side door leading to the basement of a state office building.

The group had already held its caucus earlier that afternoon inside the Statehouse — as it does every Tuesday — to discuss bills and hash out strategy in full public view.

Two Seven Days reporters caught wind of this second, unannounced and off-site caucus, and followed lawmakers to the basement. The Dems reluctantly granted the reporters entrance to a locked, windowless conference room.

This is not the first time lawmakers have tried to escape public scrutiny by meeting in secret.

It's unclear whether such a practice is legal. The legislature's lawyers have argued that, unlike other public bodies, lawmakers don't have to abide by open meeting law. Secretary of State Jim Condos has challenged that assessment.

On this occasion, the group of senators constituted a quorum of multiple committees and of the entire 30-member legislative body.

Inside, Senate Majority Leader Becca Balint (D-Windham) was taking notes on a white board. A jumble of topics were listed under the words “populist platform,” including tax reform, juvenile justice reform, caring for elderly and disabled, mental health care, and strong schools.

The private gathering appeared to be a brainstorming session about how to improve Democrats' messaging to better rebut Gov. Phil Scott. And the consensus seemed to be that, so far, the Republican governor was schooling the Dems by hammering a simple message about affordability and proposing a budget that forces lawmakers to make unpopular cuts or propose taxes — and risk a veto.

“He did a really good job of putting us in a box,” said Sen. Dick Sears (D-Bennington), who sits on the budget committee.

Sen. Chris Pearson (P/D-Chittenden) suggested holding “a press event early next week where we just pick the 20 most egregious examples of broken promises and the affordability bullshit and really lay it out there.”

“People really like Phil Scott,” countered Sen. Dick McCormack (D-Windsor). “They really like his message and they don’t like partisanship and if we start pointing out this contradiction and that contradiction, we’re the naysayers.”

He continued: "I think what we need for an overarching message is basically the governor's message [affordability], and then we add the words 'but really' … because he’s not doing it."

Sen. Michael Sirotkin (D-Chittenden) suggested another strategy: “Take the bill[s] to the goal line and let’s get a bunch of vetoes.”

“If he vetoes everything, he’s gonna have some 'splaining to do,” agreed Sen. Ann Cummings (D-Washington).

But Sen. Jane Kitchel (D-Caledonia) urged her colleagues to keep in mind that she and certain other senators have more conservative constituents who might not appreciate that kind of approach. "I can be as righteous as I want," but doing so, she suggested, could cost her her job.

At one point — as senators threw out conflicting ideas — Kitchel gestured to the two reporters taking notes at the back of the room and joked to her colleagues, “Maybe they could help us with our messaging.”