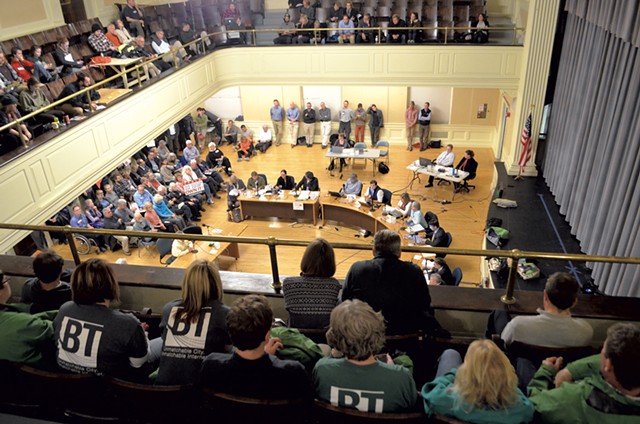 Two eliminated Burlington Telecom bidders, Schurz Communications and ZRF Partners, have gotten back in the running — this time as partners. On Monday, the Indiana communications company Schurz and the New York City investment firm put forward a $25 million joint bid that would invest heavily in the local tech economy.

Theirs was one of three final proposals for Burlington Telecom submitted to the city in advance of the city council's final decision on November 27.

The publicly traded Tucows put forward a $32.5 million proposal, up $2 million from its previous offer. And the co-op Keep BT Local raised its bid from $12 million to $18 million — though the co-op has yet to raise the $6 million difference.

Tucows and Keep BT Local were previously the two finalists. But after a pair of deadlocked council votes on October 30, the council asked Tucows and KBTL to come up with a joint bid. The effort failed — meaning that all four finalists are back in the running.

Schurz CEO Todd Schurz and Faisal Nisar, founder and sole employee of ZRF, met in Chicago for the first time last Tuesday, Schurz said in an interview in the Burlington Telecom offices. They agreed to move forward together last Friday.

Under the proposal, ZRF would have full management control, Nisar said. Schurz would have a minority ownership.

Like the other two bids, ZRF and Schurz's plan would keep the existing Burlington Telecom staff.

"We've listened to what the community is saying," Nisar said.

The matchmaker for the two was Gary Evans, who has served as a consultant to Burlington Telecom. He was the former CEO of Hiawatha Broadband Communication, which Schurz purchased, and is senior adviser to ZRF Partners. Evans would serve on any future BT board that's put in place, Nisar said.

The city council eliminated Schurz on October 16, when it got only one vote from the 12-member council. ZRF Partners dropped out after a conflict of interest arose in September.

Nisar refused to answer questions about the conflict of interest on Monday. "We're trying to look forward, not backward," he said. "We don't think there will be any issues with the current proposal."