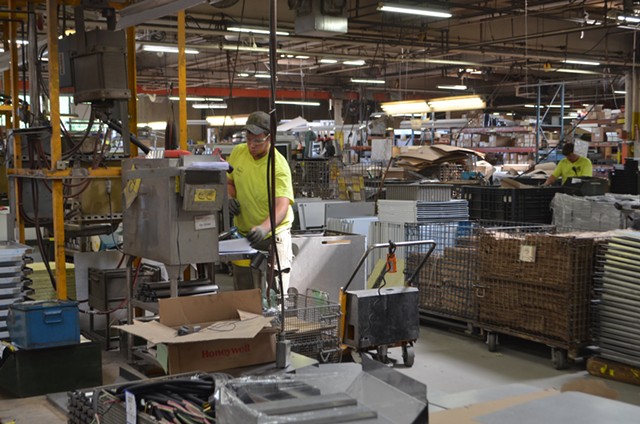 The Blodgett Oven plant was abuzz with a racket of metal and a flurry of movement Friday morning. Machines clanked and groaned, a forklift beeped as it navigated crates of steel and equipment, and the sound of the radio rang out above it all.

Not for long: After 72 years at the site — and 169 in Burlington — the facility will go quiet next year, making way for new owners who plan to transform the old manufacturing space. Blodgett Oven is moving after the company purchased a 180,000-square-foot facility in Essex from Miller Realty.

Now, Burlington business owner Russ Scully has bought the three-building, 16-acre property along the waterfront in Burlington's South End. The two parties closed the deal on June 23, according to Erica Havers, vice president and controller of Blodgett. Scully paid $14.3 million for the property, which is assessed at just over $4.1 million, according to city documents.

Scully has been tightlipped about his plans for the property, but he — along with his wife, Roxanne — already have a variety of water-related businesses in Burlington; now they also have some waterfront.

The Scullys currently own WND&WVS, a stand-up paddleboard and watersports shop along Pine Street in Burlington, along with the Spot, a surf-themed restaurant in a renovated gas station on Shelburne Road. They recently opened a second location — the Spot on the Dock — at the end of a pier off King Street in Burlington. Roxanne Scully also operates a SurfSet Fitness, a national fitness franchise for water athletes.

Russ Scully, 48, also runs Scully Interactive, which provides website design and e-marketing to businesses, and serves as head of the Burlington Business Association.

On Wednesday, Russ Scully stood in the back of his shop in shorts and a t-shirt, the perfect picture of a surfer. With streaked blonde hair falling over his ears and a mug of coffee in one hand, he confirmed the purchase, but provided few details.

"We're not ready to talk about that yet," Scully said as he declined to answer a reporter's questions.

The property is zoned for enterprise light manufacturing, which would allow a variety of uses, including retail, manufacturing, warehouses, office space or parks. Residential uses are not permitted under the existing zoning, nor are restaurants.

Scully confirmed reports from WCAX-TV that he plans to expand the existing commercial space and bring more jobs to the area. He also hopes to make the waterfront and park space available for public use. Scully said that he did not plan to move his WND&WVS shop to the new facility.

"There's tons of potential there," said Frank Cioffi, president of the Greater Burlington Industrial Corporation. "That additional square footage available is going to be great for the area and great for Burlington," Cioffi added, noting that "something in the creative and innovative enterprise area" may find the best reception and most success.

Within the coming weeks, Cioffi said he'd be sitting down with the new owners, Mayor Miro Weinberger, and other city officials interested in the future of the property. His advice? "Any good developer ... is going to engage with the city and the neighborhood, prior to getting into the permit process," Cioffi said.

Noelle MacKay, director of the city's Community and Economic Development Office, said she didn't know anything about the purchase, though she noted that she would support the developer in navigating city bureaucracy. Tom Torti, the executive director of the Lake Champlain Regional Chamber of Commerce, also admitted to being in the dark, as did City Councilor Joan Shannon (D-South District), who has lived in the Lakeside neighborhood for 22 years.

Weinberger told Seven Days on Friday that he had had one brief conversation with Scully about the transaction but was "not aware of details."

"My sense is that Russ is still in the early stages in figuring out what is best for this property long-term," he said. "I think it's premature to get into exactly what that ... will be."

The mayor promised to encourage Scully to make the property's waterfront fully public. He also pitched a plan to relocate the bike path from its current route — squeezed between the Blodgett building and the railroad tracks — to the green space along the water's edge.

Weinberger expressed confidence in Scully's caretaking abilities of the new property. "I find him to be someone who is fully committed to the community, quite generous with his resources and his time and has made some real contributions to Burlington," he said.

Rachael Miller, a friend of Russ and Roxanne Scully, agreed with the mayor's assessment. Miller, who once taught the Scullys how to windsurf and snowkite, said that the couple will steward the land well. Roxanne Scully serves on the board of Miller's water-oriented nonprofit, the Rozalia Project. "They're generous, enthusiastic, spectacular people — a perfect match for any waterfront property," Miller said.

The move is a big change for Blodgett, a company that's been an anchor of the Lakeside neighborhood and a fixture in Burlington.

In 1848, Gardner S. Blodgett built a pizza oven for a local tavern owner, and soon after, founded Blodgett Oven in a building on Bank Street. The company expanded over the following decades and in 1945, constructed the three existing buildings on the lakefront, along the railway.

It's since outgrown the 135,000-square-foot facility, said Havers. At its peak in 2001, when Middleby Corporation bought the company, Blodgett had close to 400 employees.

Now, that number sits around 200, but quarters are tight. The company designs and sells combi ovens, steamers, and convection ovens — Blodgett's "bread and butter," Havers said — in 81 countries worldwide.

The company has looked to move repeatedly over the last few years. They considering building a new facility along Lakeside Avenue and also discussed a trade with real estate agent Pat Malone for a building in Essex. This time around, the price was right, Havers said. Its value lies in its lakeside proximity. "The beauty is in the eye of the beholder," she said. For her, the loss is bittersweet. The water frontage "is a perk, but it doesn't build ovens," she said.

Blodgett's three buildings sit on a lush lawn looking across the lake to the Adirondack Mountains. On Friday, the brick manufacturing building with chipped white trim emanated a rumble of machinery. The campus also holds an office building and a third, smaller building leased to Galen Healthcare.

It's a company with a devoted employee base and deep roots in the neighborhood. The average employee tenure is 14 years, said Havers, and a list of employee anniversaries on a bulletin board lists close a dozen names of those who have been at Blodgett more than 30 years. Several others have passed the 40-year mark.

Corey Brown, who "does everything" in the oven assembly process, followed his father to work at Blodgett and has been with the company for five years. "Blodgett's built by the people who work here," he said. "It's a great place to work." The important thing, said Dennis Place, a fabrication supervisor, is that Blodgett stays in Vermont. The lifelong Hinesburg resident has worked at Blodgett for 24 years, and it's become a family affair: His father-in-law, a brother-in-law, two brothers, a niece and and nephew have all worked for the company at some point in time.

Still, Place said he's looking forward to the move. "It's tight," he said as he moved aside for a passing forklift. "We can be more efficient in a new space." Blodgett has a company cat they call "Mama" who has birthed kittens adopted by employees who want them. On a tour of the facility Friday, Havers commented on one employee's new hairdo and another's recent social media activity. "It's like a family," she said.

Torti declined to speculate on the details of the purchase, but said that he saw the change as a "net positive for the region."

"The fact that Blodgett is staying in Vermont, and not moving elsewhere, where some would say the cost of doing business is cheaper ... shows that companies competing around the globe can stay in Vermont," he said.

The redevelopment "gives Burlington a chance to reuse a significant asset," Torti said. While Blodgett's presence has benefited the city, he added, "the unknown sometimes is even more exciting."