I'm paddling out toward the rolling white froth of surf, somewhere off the coast of Bali, furiously scooping my arms until my instructor tells me to jump up and lunge forward.

When I fail to catch a wave — repeatedly — I'm not frustrated. I am, however, breaking a sweat. That's because I'm actually inside a fitness studio on Burlington's Pine Street. That Balinese ocean? It's the surf movie Indo, silently projected on the wall by a MacBook while the theme song to "Hawaii Five-O" plays. And my instructor isn't some darkly tanned dude; it's Roxanne Scully, a Burlington mom and business owner. She and her husband, Russ, have already brought the seashore to Burlington with the surf-inspired Spot restaurant and their water-sports store, WND&WVS.

Scully has added sweat to the wet this month by opening SurfSet Fitness, a franchise of a nationwide program founded in 2011 by a Boston-based trio. Based on custom surfboards, each fixed and mounted on three inflated bubbles, the workout is designed to mimic the movements of surfing even when the ocean is hundreds of miles away.

"I love fitness and I love feeling strong, and I thought this could work in Burlington — something for winter," says Scully, one of four teachers certified to teach SurfSet here. "I was really intrigued, especially as a woman, that at age 45 I could get really into surfing and really enjoy it."

SurfSet, Scully explains, has a fast learning curve for achieving better stability, balance and confidence, no matter what the environment.

"Surfing" beside me during a Tuesday evening session is Shannon Lipkin, Spot manager, surfer and stand-up paddleboarder, who sips from Vita Coco coconut water between sets on the RipSurfer X trainer. Later, she explains how the workout caught her eye when she saw it on a 2012 episode of the reality competition show "Shark Tank."

"I had just started surfing, and I fell in love with it," says Lipkin, who shared the idea with Scully. "To me, a surfer has probably one of the best bodies, along with a fit, healthy lifestyle. I thought, Gosh, if there's a way we could bring SurfSet to Vermont, let's do it!"

When a Pine Street space became available this fall — previous tenant REV Indoor Cycling relocated to Flynn Avenue — the timing was right for Scully, who owns the building with her husband. They opened SurfSet in conjunction with the adjacent South End Studio. 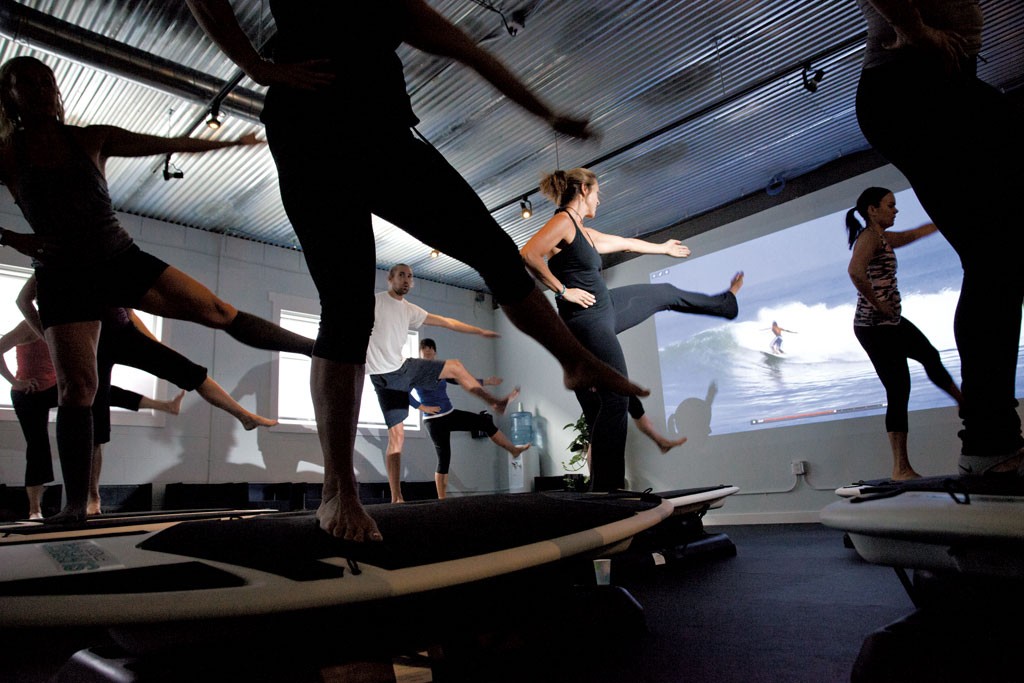 The galvanized ceilings of REV remain, but in the spinners' places are 10 boards, a wall of mirrors, potted palms and even a Buddha statue turned into a trickling fountain. "I wanted it to be warm and welcoming," says Scully. She says she worked with Anna Stein of Perch Interiors to create the beachy fitness boutique in a Queen City 'hood that's now brimming with wellness options.

"Well" is not exactly how I feel during my first foray on the RipSurfer X, despite having surfed occasionally in Costa Rica and Rhode Island. I feel weirdly wobbly when I step on the board and balance on my right leg while attempting to follow Scully's sweeping left-leg motions. I quickly discover why SurfSet's tagline includes "Embrace Instability." Within a few minutes, though, I've adjusted enough to focus on the fun of the workout — without falling off the board.

"I never really enjoy group classes," Lipkin tells me later. "But this is so new — being able to laugh at myself while getting such a core workout."

Each of the SurfSet instructors brings a different element to the classes she teaches, explains Scully. Some of the 60-minute sessions are like a high-intensity boot camp, while others are based on rhythm and barre-inspired routines. Scully's Tuesday evening class is not only infused with her passion for tropical retreats but influenced by her background as a teacher of the martial art Nia.

Helaina Stergas, a fellow SurfSet student, discovered the new workout through Scully's Nia classes at South End Studio, and says she was immediately hooked by the fun. "I was surprised to find I was sore after class," says Stergas, a 19-year-old student at the University of Vermont. "Balancing on the boards is a great and easy way to add a strength workout to my routine."

Part of the appeal of SurfSet is the innovative setup. In what other fitness class can you zone out on a surf movie while zeroing in on your quads, hamstrings and glutes?

When we shift from standing leg-sweeps to a plank position, Scully leads sets of "wave runners," during which we rapidly bring each knee to an opposite leg to the beat of Awolnation's "Sail." Then we move on to "One More Time" by Daft Punk as we tackle squats and lunges.

"Surfers possess total body strength, from their long, lean muscles to their ripped abs," notes the SurfSet website. It promises that the workout — which integrates balance, core strength, cardio, flexibility and agility — can burn up to 900 calories an hour.

By the end of the class, as we move from Pilates-like leg circles to the jumping lunges known as "pop-ups" — a move required to ride water — I'm still miles away from monster waves. But I feel the spirit of camaraderie that develops during an actual surfing session with friends, and I'm inspired to give the sport another go — outdoors and in.

"It's such a powerful feeling to get off the water," explains Lipkin. "Your body feels tired but good. And with more strength, you can catch more waves."

Landlubbers may scoff at the idea of a surfing class in Vermont, but exercisers don't need to have winter travel plans for Hawaii or Puerto Rico to reap the benefits.

"It's definitely not just for surfers; anyone can come in and step on the board and learn the language, so they feel comfortable and natural," says Scully. And, she notes, the workout could be a great work-up to the ski season. "Yes, [SurfSet has] a fun, warm environment, but think about those first couple of weeks out on the snow, when you're like, 'Oh, my God' — the torture of your muscles. It's great for skiers."

The original print version of this article was headlined "Ocean Motion"