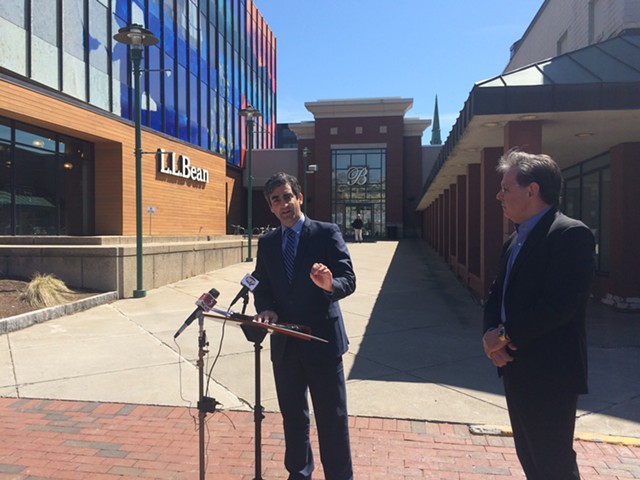 They still need City Council approval, which they hope to get by May 2. City Council President Jane Knodell, who was in the audience at Wednesday's press conference, suggested the council may need more time before weighing in.

Sinex, who bought the downtown mall in 2013, plans to spend $200 million to turn it into a mix of offices, retail stores, restaurants and up to 274 housing units. He announced Wednesday that he has a letter of intent from Champlain College to lease up to 110 of those units to its students.

Under the agreement, the city would spend up to $21.9 million in public infrastructure improvements, funded through tax increment financing. As part of that work, two streets currently segmented by the mall — St. Paul and Pine — would be restored. Sidewalks, streetlights and below-ground utilities would also be added.

Sinex has agreed to pay construction workers a livable wage and to adhere to the city's inclusionary zoning requirement, which in this case mandates that 54 of the units are affordably priced.

City officials are mindful of the EB-5 scandal revealed last week that threatens projects in the Northeast Kingdom. The civil fraud charges against Bill Stenger and Ariel Quiros seem likely to leave Newport with an empty hole in its downtown for the near future. Weinberger made assurances that safeguards in the agreement protect against a similar scenario, but Knodell said the council wants to make sure that's the case.

She also wants the council to review the administration's TIF estimates to make sure the city won't take on more debt than it can handle. This financing tool allows municipalities to pay for projects with a public benefit by taking on debt, which is later repaid through the additional tax revenue generated by the projects.

Knodell said she personally is "not on board with the current version" of the agreement. She'd like to see less student housing and a firm commitment to owner-occupied housing that would meet the needs of "empty nesters."

The agreement also depends on the Development Review Board and the council signing off on zoning changes that would allow Sinex to construct a 160-foot tall building, which would make it the state's tallest. Weinberger and Sinex defended what's been a controversial part of the plan. Weinberger noted that Vermont would still have the "shortest tallest building" of all 50 states, while Sinex insisted that, if done right, "it's not that big of a deal."

If they get the zoning changes, the project would still have to go through the city's standard permitting process.

Voters will be asked to approve the TIF allocation this November. Before that, Weinberger needs the state legislature to extend the deadline for using this funding mechanism. He emphasized that the agreement requires Sinex to pay for improvements up front, with the city reimbursing the developer only after the project has created enough additional tax revenue for it to pay the debt service.