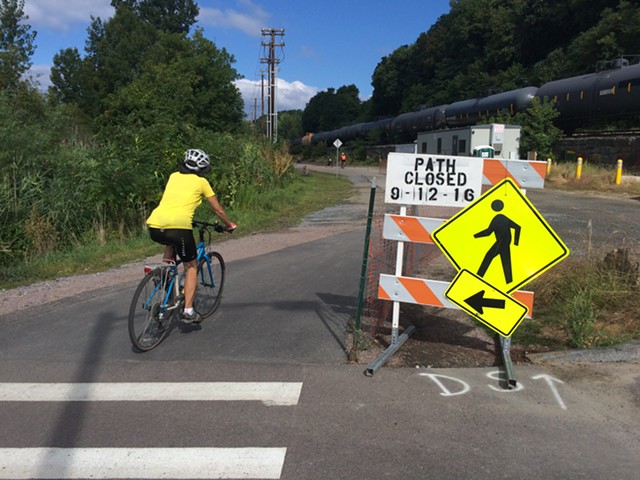 Updated at 4:15 p.m. to add in estimated tax increases in the event the bond proposals pass.
Burlington residents will have a say at the polls this November on several big-ticket items.

The city council on Monday unanimously approved Mayor Miro Weinberger’s proposal to put a $27.5 million bond for capital upgrades on the ballot. Among the repairs it would pay for: sidewalk and street upgrades, bike path improvements, and several new fire engines.

At the same meeting, the council approved an $8.4 million bond to replace aging water pipes. Forty percent of Burlington’s water mains are more than 75 years old, according to the administration.

The water bond needs a simple majority to pass, while the capital bond requires approval from two-thirds of voters.

If the capital bond passes, the owner of a home valued at $231,500 would see their tax bill increase incrementally, up to roughly $120 more per year by 2027, according to figures provided by Weinberger's administration. Similarly, if the water bond passes, the water bill for an average single-family home would gradually increase to an additional $31 per year by the year 2022.

Before the vote, several council members expressed reservations about straining residents’ wallets. Councilor Sharon Bushor, an Independent, worried that residents, presented with so many large financial items on the ballot, would “just vote them all down.” The Burlington School District has been considering putting a multimillion-dollar bond on the ballot for its infrastructure needs. And the Weinberger administration will also be seeking approval of $22 million in tax increment financing to fund public infrastructure work associated with the Burlington Town Center project.

But the council’s tripartisan support bodes well for the bonds’ chances of passing.

The council also approved the mayor’s broader $50 million, 10-year capital plan, which includes the two bonds on November's ballot. To raise cash to fund the rest of the plan, Weinberger wants to increase the city’s tax on alcohol and rooms by 2 percent, get the University of Vermont and Champlain College to pitch in, and seek other private donations. While the total cost is hefty, the mayor emphasized the plan is full of necessary improvements. It’s “not a Cadillac plan,” he said.

Earlier Monday, longtime bike path advocate Rick Sharp succeeded in getting an item on the ballot by way of a petition. With help from family and employees of his Segway company, Sharp collected the required 1,650 signatures to put the following question to the voters: “Should the Mayor of Burlington and the City Council be advised to relocate the Burlington Bicycle Path to the west side of the railroad tracks between College and King streets even if that means utilizing the public trust doctrine or eminent domain to accomplish this task?”

The rerouted bike path Sharp proposes would allow users to twice avoid crossing the railroad tracks — but it would pass through Lake Champlain Transportation property. According to operations manager Heather Stewart , the company depends on that strip of land to access their ferries and make deliveries during high water.

Sharp, who helped create the bike path by getting a question on the ballot back in 1980, is adamant that the relocation is needed. He says the two rail crossings are hazardous and contribute to bottlenecks along that downtown section of the bike path. “To me it’s like finishing the last piece of the puzzle,” he said.

City Parks, Recreation & Waterfront Director Jesse Bridges doesn’t necessarily disagree with Sharp. “We have long held conceptual plans for the bike path that include moving the path to the west of the tracks,” Bridges said. But he suggested that “it’s not as easy as it might seem.” He continued: “It’s a complicated area that involves a couple pieces of private property,” as well as engineering challenges.