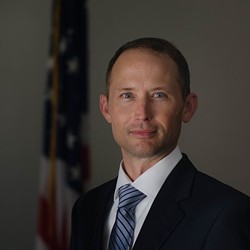 The federal prosecutor investigating expansive fraud allegations in Vermont's Northeast Kingdom has close ties to many of the political players touched by the scandal.

One of them is his wife.

"We have been aware of the state and SEC civil enforcement efforts made public today," Miller said in a written statement last Thursday. "My office has been conducting, and continues to conduct, an investigation designed to determine whether or not there have been violations of federal criminal law in connection with EB-5 projects in the Northeast Kingdom."

Federal and state officials have said that Quiros and Stenger defrauded foreign investors of $200 million in what they call a "Ponzi-like" scheme. The two men used the federal EB-5 investor visa program to raise more than $350 million for a series of development projects at Jay Peak Resort, Q Burke Mountain Resort and elsewhere in the Kingdom.

Since news of the allegations broke last week, Gov. Peter Shumlin has come under heavy scrutiny for promoting the projects abroad, accepting campaign contributions from the developers and waiting until December 2014 to implement an aggressive oversight regimen. Shumlin, however, has said that the new oversight rules played a key role in unraveling the alleged fraud.

At the center of it all was Miller's wife, Burlington attorney Liz Miller. After serving as Shumlin's first Department of Public Service commissioner, she became his chief of staff in January 2013 and stayed on the job until May 2015. It was during that period that state officials say they grew suspicious of Quiros and Stenger and took action to enhance the state's regulation of EB-5 projects.

According to Shumlin spokesman Scott Coriell, Liz Miller played a role in transferring oversight authority from the Agency of Commerce and Community Development to the Department of Financial Regulation.

Miller herself downplayed her involvement in EB-5-related matters.

It's not clear whether the scope of the U.S. attorney's investigation would include the state's role in regulating and promoting the allegedly fraudulent projects. No evidence of wrongdoing by Shumlin or other elected officials has yet emerged. And according to the prosecutor himself, he would be removed from involvement if it did.

"As always, we're doing this by the book," Eric Miller told Seven Days on Tuesday. "Under clear Department of Justice rules, I have not and will not play any role in decisions that relate to the governor's administration — including decisions on the scope of the federal investigation as it could relate to state agency actions."

And, according to Miller, he won't be the one to determine what constitutes a conflict.

"The department has mechanisms in place to make sure that a neutral decision-maker in Washington determines the appropriate screening in any case within the office," he said. "That process is always a continuous one."

The Millers also have close ties to Sen. Patrick Leahy (D-Vt.), whose office once described the senator as EB-5's "leading champion" in Congress. Like Shumlin, Leahy has joined Stenger at EB-5 investor events abroad — in his case, in China, Vietnam and Ireland.

As the state's senior U.S. senator, it was he who recommended Eric Miller for U.S. attorney in February 2015. At the time, Leahy praised the Sheehey Furlong & Behm partner for his "thoughtfulness, vision and depth of experience."

On May 2, Liz Miller is scheduled to serve as a host for a Leahy fundraiser in Burlington.

Both Millers have given handsomely to Vermont Democrats over the years. Eric Miller contributed $2,250 to Shumlin's 2010 and 2012 campaigns, according to VTDigger.org's campaign finance database, while Liz Miller contributed $4,250 to the governor. Including those donations, they have contributed $10,050 to candidates for state office within the past six years.

At the federal level, they have donated a collective $20,400 to Democrats, according to data compiled by the Center for Responsive Politics. Recipients include President Barack Obama, Congressman Peter Welch (D-Vt.), the Democratic National Committee and the Vermont Democratic Party's federal account.

During her time as Shumlin's chief of staff, Liz Miller did not appear to play a major role in the governor's campaign fundraising efforts. But she did join him at a Democratic Governors Association donor event in September 2013 at Manchester's Equinox Resort and Spa. At the time, Shumlin was serving as chairman of the DGA, which raises money from corporations and unions to fund Democratic gubernatorial campaigns.

As host of the "chair's retreat," Shumlin had the opportunity to invite local business leaders to take part in a panel discussion attended by his fellow governors.