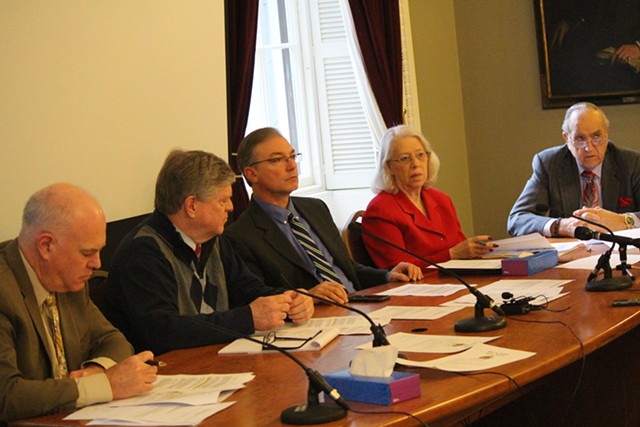 It took the Vermont Senate Rules Committee all of four minutes Friday morning to dispense with a request from suspended Sen. Norm McAllister (R-Franklin) to regain his voting privileges.

By voice vote, the five-member panel rejected the entreaty.

McAllister, who has been charged with felony sexual assault, was suspended from the Senate in January pending the conclusion of his legal proceedings. At the time, his criminal trial was scheduled to begin in February. Jury draw was subsequently delayed until May.

Two weeks ago, a legislative lawyer wrote the Rules Committee on McAllister's behalf, asking for his suspension to be lifted. Through the lawyer, McAllister argued that he could fully perform his Senate duties and that suspension was now tantamount to expulsion, since his legal proceedings would not be resolved until after the legislative session wrapped up.

"I do not think anything of significant change has occurred to have us reconsider," said Senate President Pro Tempore John Campbell (D-Windsor), who chairs the panel. "I also think the Senate was clear in its position."

Sen. Phil Baruth (D-Chittenden), the majority leader, said "it was understood that the trial [date] could be a moving target" when the Senate voted 20-10 to suspend McAllister.

"And that was one of the reasons why the measure was drafted so that it didn't have a fixed date but had a target [of] when the charges were lifted," Baruth said. "And they haven't been lifted. So I agree with the chair that nothing has changed."

Sen. Peg Flory (R-Rutland), a close ally of McAllister's, was the sole dissenter. She agreed with her Franklin County colleague that the change in trial date was a material change.

McAllister said he could not afford a lawyer to sue the legislature and could not find one who would represent him pro bono.

"The system doesn't work," he said. "The checks and balances don't work. I find myself in a legal situation where I can't get anybody that wants to defend the constitution of Vermont and the United States."

Earlier this week, Rep. Carolyn Branagan (R-Georgia) told Seven Days that she would run for the two-member district represented by McAllister and Sen. Dustin Degree (R-Franklin). Democrat Caroline Bright has also said she would run.

On Friday, McAllister said he was not ruling out a run for reelection.

"I've had quite a few people approach me and ask me to," he said. "I see a whole bunch of people lining up, figuring I'm vulnerable, including some Republicans. But that doesn't surprise me. I don't know right at this point. I'm seriously considering it. But right now I'm probably considered very damaged goods."