Senate Panel to Reject McAllister Request for Reinstatement | Off Message 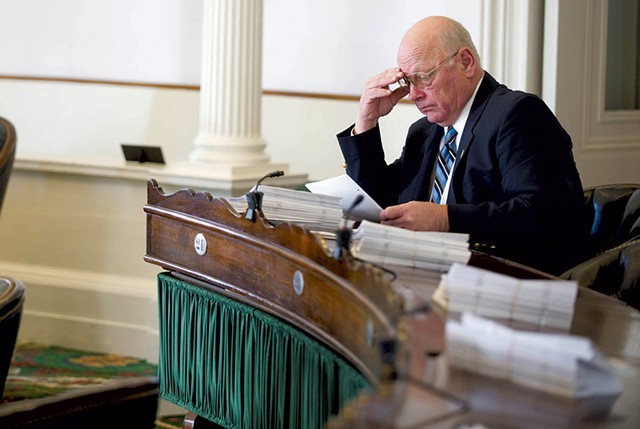 "I think that's my last recourse," he told Seven Days .

But four of the five members of that panel, the Senate Rules Committee, said Wednesday that they oppose McAllister's request.

"We made a decision on this," said Senate President Pro Tempore John Campbell (D-Windsor), who chairs the committee. "The Senate vote was very clear about suspension, so I don't think anything changes."

McAllister, who is facing criminal proceedings for multiple sexual assault charges, thinks something has changed. At the time of his suspension, he was scheduled to go on trial in February. That trial has since been delayed, and jury selection is now scheduled for May.

"As a result [of the trial's delay], Sen. McAllister's suspension will last for the complete session, and he therefore believes that is equivalent to an expulsion," Martland wrote. "In addition, with his criminal trial delayed, he is fully able to fulfill all of his duties as a Senator."

But Sen. Phil Baruth (D-Chittenden), the Democratic majority leader and a member of the Rules Committee, said the Senate recognized at the time it suspended McAllister that his trial could be delayed.

"I don't believe the support is there to change his suspension because [the resolution] says he is suspended while his charges are pending," Baruth said.

Flory, a close McAllister ally who fought suspension in the first place, argued that the legality of the Senate's action grows more and more questionable the longer McAllister's suspension lasts.

"I will absolutely vote to have it reheard," she said. "I don't think we had the right to suspend him in the first place."

Even if the Rules Committee reconsidered, the full Senate would have to do the same. It voted 20-10 to suspend.

McAllister said Wednesday that he had spoken to several lawyers about suing the legislature over his suspension, but he was advised that the legal process would take too long to make any difference and would cost him more than he could afford.

"The last one I talked to said, 'Listen, if we went forward with it right now, it wouldn't be dealt with until after the legislative session,'" he said.

According to McAllister, several constituents had also considered suing, but they came to a similar conclusion.

McAllister also blamed his colleagues in the Senate for what he believes was an illegal action. "They hold a dictatorship in the legislature — especially in the Senate," he said.