David Zuckerman to Run for Lieutenant Governor | Off Message 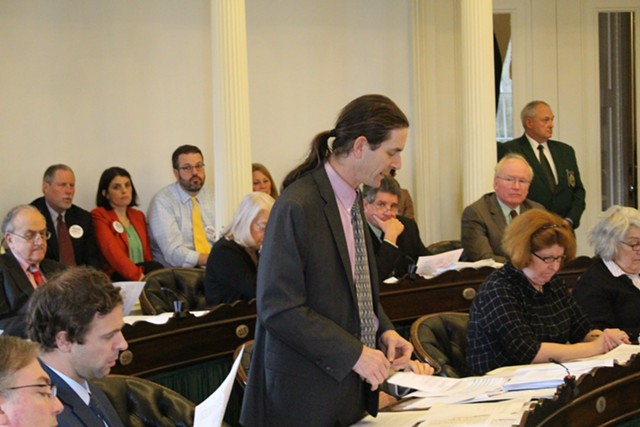 “I bring a lot to the table, having worked with Vermonters on a lot of issues,” Zuckerman said, adding that he wants to promote a strong, rural economy and address climate change. “I have a lot of experience and connections across the state.”

Zuckerman, 44, served 14 years in the Vermont House, representing Burlington. He took a two-year hiatus from politics while moving his organic farm to Hinesburg. Zuckerman won election the Vermont Senate in 2012 and reelection in 2014. He and his wife, Rachel Nevitt, have one daughter, Addie.

The Massachusetts native, a University of Vermont graduate, was an early advocate for same-sex marriage and, in 2013, successfully pushed to require the labeling of genetically modified foods. He is lead sponsor of a bill to legalize marijuana. Earlier this year, he fought unsuccessfully to preserve the state’s philosophical exemption for childhood vaccination.

As he cut broccoli on his farm Tuesday, Zuckerman said in a phone interview that he hadn’t planned to announce his candidacy that day, but had been telling friends he was going to run. One of them, Kathryn Blume, tweeted the news. “So now it’s out fully,” Zuckerman said.

He acknowledged that seeing other candidates jump into the race and talk about running prompted him to act sooner than he had originally planned.

“Once one person gets in a race, everybody else has to think about it more,” he said.

Zuckerman, a longtime Progressive, plans to run in the Democratic primary, while also seeking write-in votes in the Progressive primary. He has done the same in his two successful runs for state Senate.

The Hinesburg resident’s early announcement will likely disqualify him from seeking public financing for his campaign, as the law requires candidates hoping to receive up to $200,000 through the program to wait until February to start campaigning. Zuckerman said he’ll still look into the possibility of seeking public financing, but legal challenges pending against 2014 Progressive and Democratic lieutenant gubernatorial candidate Dean Corren make that route uncertain.

“I would run either way,” Zuckerman said.

Zuckerman will compete in the Democratic primary against state Rep. Kesha Ram (D-Burlington) and Marlboro political newcomer Brandon Riker. Former Politico Magazine editor Garrett Graff said last week that he’s likely to join the race as a Democrat, though he is facing questions about his eligibility. Former state auditor and senator Randy Brock is running for the Republican nomination.

They are all seeking to replace Republican Lt. Gov. Phil Scott, who is running for governor.