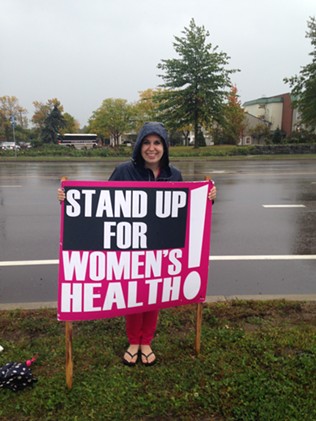 A Saint Michael's College student was told she couldn't get academic credit for an internship at Planned Parenthood, and now she's pushing the Catholic institution to establish clear guidelines about which organizations it chooses to sanction.

Erin Irons, a senior from Fair Haven, Vt., is double-majoring in history and political science, with a minor in gender studies. She applied for a public affairs internship at Burlington-based Planned Parenthood of Northern New England over the summer — and got it.

But Planned Parenthood staff warned Irons that a previous St. Mike’s student had been denied academic credit for an internship in 2011, prompting her to contact the college dean, Jeff Ayres. (Because the internship wouldn't commence until spring, Irons had not yet submitted an application for credit.)

One week later, according to Irons, the dean told her that the administration’s position hadn’t changed: Granting academic credit for an internship at Planned Parenthood, which provides abortions as well as other health services, would conflict with the school’s Catholic mission.

The administration's response, first reported in the student newspaper, the Defender, has sparked a debate about the tension between religious values and academic pursuits at a Catholic school with a reputation for open-mindedness. Roughly half the students are Catholic.

Karen Talentino, vice president for academic affairs, summarized the administration's stance: "One of [the Catholic church's] most fundamental convictions is that abortion is sin and is murder of a living person, so given that we are a Catholic college, I think it makes sense that we would not form a formal relationship with an organization that not only performs abortions but is an advocate for continuing to perform abortions."

She also emphasized that the school supports and encourages internships.

Irons had planned to spend the spring semester as a public affairs intern, tracking environmental health-related legislation for Planned Parenthood in Montpelier. She said she reluctantly turned down the internship, because in her final semester of college, she needs to accrue the credits necessary to graduate. “If anything was to prepare me for the quote unquote real world, it would have been this internship,” she said.

“I understand that it’s a Catholic institution,” continued Irons, who was raised Catholic but no longer identifies as such. “But it’s also an educational institution.”

With backing from the executive board of the Student Association — the college's student government — Irons is calling on the administration to establish a more transparent internship policy. She wants a list of organizations at which students wouldn’t qualify for academic credit. And she wants to know who makes decisions about whether an organization’s mission aligns with that of the Catholic Church, and what criteria they use.

These requests, outlined in a letter sent to the college president three weeks ago, have gone unanswered, Irons said.

Talentino said she plans to meet with Irons this week, and that the college is committed to finding her another internship. It's unlikely, however, that the college will acquiesce to Irons' requests.

Noting that it's rare for a student to appeal a decision regarding academic credit, Talentino said it wouldn't make sense for school officials to spend time vetting a large number of organizations. She pointed out that St. Michael's already has people who guide students through the internship application process — including an internship coordinator, faculty mentor and a site supervisor — helping them determine whether a certain organization would be a good fit.

She also argued that students have a role to play when it comes to vetting internship options. "Students need to think first and foremost about what would be a good learning experience for them," she said. But given the school's mission, she continued, "they should also think about is there any reason why this might not be a good choice."