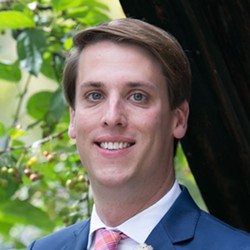 Garrett Graff, a Vermont native who's spent the past decade in Washington, D.C., says he's "exploring the option of running for lieutenant governor" in his home state.

Graff, 34, announced last week that he was leaving his job as editor of Politico Magazine and moving back to Vermont. On Friday, he told Seven Days he's planning to leave journalism for politics. If he runs, he would do so as a Democrat.

"I believe Vermont is at a critical point right now where it has to make some very critical decisions about what kind of state it's going to be over the next generation, and I believe I have something to bring to that conversation," Graff says.

Despite his Vermont roots, the younger Graff’s residency could pose a challenge. He last lived in the Green Mountains during the Dean campaign in 2003 and early 2004, after which he moved to D.C. He and his wife, Katherine, recently bought a house in Burlington and are moving to the state later this week.

Whether Graff is constitutionally eligible to run for lieutenant governor is another question.

“No person shall be eligible to the office of Governor or Lieutenant-Governor until the person shall have resided in this State four years next preceding the day of election,” the Constitution says.

Graff has remained a registered Vermont voter since he turned 18, he said, listing his parents’ Montpelier home as his address. He also has a Vermont driver’s license and car registration, he said.

“Vermont has always been where my home has been and it has always been my intention to return to the state of Vermont,” Graff said. He pointed to a statute that allows those who move out of state temporarily to remain voters if they intend to return.

According to Secretary of State Jim Condos the wording of the Constitutional requirement is a little unclear. He says he has reached out to Attorney General Bill Sorrell’s office to clarify whether it means such candidates must live in the state for the four years immediately preceding Election Day, or just four years total.

“We’re waiting for an opinion to understand what that means,” Condos says.

Lieutenant governor may not be the only office Graff has eyed. As Vermont Public Radio’s John Dillon and Taylor Dobbs wrote on Twitter earlier Friday, the potential candidate reserved at least two domain names — graffforgovernor.com and graffforsenate.com — in September.

“I wouldn’t read anything into those domain names at all,” Graff says. “I’ve purchased dozens of domain names over the years for various things and own all sorts of different ones.”

He says he was not considering running for governor or Senate when he bought those two domain names.