Mike Luoma has been let go as the music director of local radio station 104.7 WNCS-FM the Point. The longtime local DJ announced the news last week on his Glow in the Dark Radio blog and via social media. Luoma, who has been a prominent figure in Vermont radio since 1983 — including nearly two decades at 106.7 WIZN-FM — had been with the Point for almost eight years.

"I was shocked," he told Seven Days by phone. "This really was my dream job."

According to Luoma, his firing was not performance related — he said he even received a glowing recommendation from station owner Ed Flanagan. The DJ was simply the odd man out.

Luoma explained that, earlier this year, longtime program director and morning host Zeb Norris scaled back his duties at the Point to focus on other stations owned by Northeast Broadcasting, the Point's parent company. That move led to the hiring of a new PD, John Mullet. But a change of plans at Northeast Broadcasting brought Norris back to the Point, essentially leaving three people for two positions.

Norris, who has been with the Point since 2005,  was named music director and Luoma was let go. An inquiry to Flanagan for comment was not returned.

Luoma said that while he's saddened by his sudden departure, he's excited for future possibilities and has already received inquiries about his availability. In the meantime, he'll likely devote more energy to writing — Luoma is the author of science fiction series Alibi Jones and Vatican Assassin, and also writes comic books.  He'll still be hipping listeners to new music via his Glow in the Dark podcast and blog.

"Whatever happens, I'm going to keep sharing music with people," Luoma said. "That's just what I do." 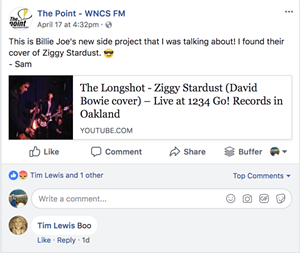 The news of Luoma's departure did not sit well with his friends and fans. On social media, some called for a boycott of the Point, as well as a movement to send letters to the station in support of the DJ.

Perhaps emblematic of the feelings among his fans was the reaction of Luoma's friend Tim Lewis. On the day news of the firing broke, the noted local music superfan took to the Point's Facebook page, commenting on several of the station's posts with a stinging rebuke: "Boo."

While he's appreciative of the support, Luoma said he'd prefer to take the high road and hopes his supporters will, too.

"I appreciate the thought, but I certainly don't want anyone to boycott the Point," said Luoma. "There are a lot of great people [at WNCS] and they don't deserve that."