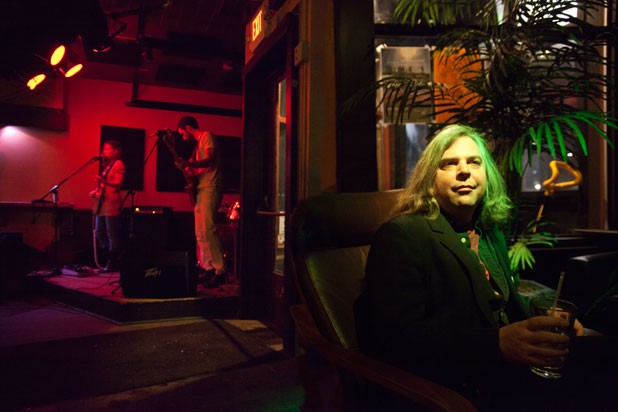 Scan the room at most local rock shows, and you’ll observe various types of concertgoers. There are the average fans, generally attentive people who form the majority of most crowds and tend to clump together in a semicircle in front of the stage. There are the cool kids, typically identified by hipsterer-than-thou detachment as they hang near the back of the room or by the bar, the occasional head nod or absentminded clap the only clues that they’re paying attention to the music onstage. There are the talkers, people whose constant babble suggests they’re oblivious to the performance at hand — or are just total assholes. There are social butterflies and wallflowers, hardcore fans and obvious noobs, players and prudes, drunks and teetotalers, cheerleaders and critics.

And then there is Tim Lewis.

Lewis is something of a Burlington institution, a fixture at local shows for close to 30 years. The general consensus is that he’s attended more rock concerts than anyone else around — though no one really knows.

Without hesitation, Lewis can recall the names and lineups of long-departed Queen City bands that most have never heard of, or have long forgotten. Save for the occasional political remark, his Facebook page is like the Yelp of local music, composed of reviews of shows he’s recently seen. And, of course, Lewis has a blog, Tim’s Triangle Tribune, on which he faithfully documents his live-music adventures. Like, all of them. Rare is the concert, whether at a club, café or basement party, that Lewis attends without posting at least some acknowledgment, along with what he thought of it.

“I think he deserves an award,” says Vedora’s Caroline O’Connor. “I swear he’s been to more shows than anyone in this town.”

(Cut to the town’s professional music writers slinking away in embarrassment.)

Lewis is not a paid music journalist. He’s not an A&R rep scouting for the next big thing — the guy works in the call center at Gardener’s Supply. He is, quite simply, a fan. And, in the realm of local-music fandom, Lewis stands alone. Sometimes literally.

At concerts, he can usually be found planted in front of the front row, notepad in hand, taking in the show with his signature fidgety enthusiasm.

It starts with a quick nod, imperceptible if not for the shimmy of the straight hair cascading past his shoulders. From there, the tremor progresses down his body, maybe punctuated by a jerky elbow burst from otherwise straight arms, a subtle, air-guitar-y flick of the wrist, or rapid foot taps. When a band is really rocking, Lewis’ entire body becomes a twitchy, rhythmic bustle, culminating in a sort of head-banging seizure.

“I’m kind of awkward,” Lewis confesses recently over coffee. “But music has always had a very powerful effect on me.” Indeed.

When those movements are coupled with his long, classic-rock mane — OK, it’s kind of a mullet — Lewis cuts a curious figure. To the untutored onlooker, his manic energy may seem strange, bordering on comical. But that’s not the perception from the stage. To at least one local band, Tim Lewis may be something of a muse.

“Lendway told me once that they can tell if a new song is any good by how much I react to it,” Lewis says, grinning.

“Tim epitomizes the guy that you want to be playing for,” says Lendway’s Matt Hagen. He doesn’t specifically recall telling Lewis he’s a human rock-and-roll barometer, but concedes he “probably did” at some point.

The average fan can lose track of the subtleties of a great performance amid catchy hooks or flashy solos. It takes a particular kind of listener to pick up on those nuances, or to care. Hagen thinks Lewis appreciates music on a genuine, profound level, so it resonates in him.

“When he’s in the audience, it’s an affirmation,” Hagen continues. “He’s that one guy who is absolutely going to appreciate the kinds of things that you, as a musician, are having conversations with yourself about.”

Lewis, 48, was born and raised in Shelburne. He shared a first musical love with legions of other teenagers in the late 1970s and early ’80s: Kiss.

“Ace Frehley’s guitar … those notes just always seemed to be in the right place,” he recalls wistfully.

Lewis is soft-spoken with a shy, genuinely sweet demeanor. He clams up a bit when pressed about his personal life. But he grows increasingly animated when the subject turns to music.

His first show was the Ramones at the Flynn Theatre in 1981 — with Burlington New-Wave band the Decentz opening. Lewis says Def Leppard are the “the most pyro” band he’s ever seen live, Iron Maiden the loudest. But it was Ninja Custodian in the early ’90s that turned him on to local music.

“I was never quite a Phish fan,” Lewis says. “They were kind of OK, I guess. But Ninja was just this furious energy … a funky, metal sort of thing that didn’t sound like anything else.”

Lewis says he was hooked immediately and has made local music a priority ever since.

How many shows does he see per year? Lewis isn’t sure. “Maybe one a week,” he ventures. “Sometimes two?”

In a blog post from December 2008, Lewis tallied the number of bands he’d seen that year. The number was 172, spread over a total of 72 shows at 23 venues. According to O’Connor and others, he hasn’t stopped being ubiquitous in the years since. Dude is simply always at a show.

“He honestly feels like a band member to me,” says O’Connor. “It’s a comforting feeling to have him [at a show], like, ‘OK, Tim’s here. We can start now.’”

O’Connor says she’s known Lewis since her days in then-local psych-rock band the Cush — an all-time Lewis favorite. As he has done with a number of local acts — including Lendway — Lewis has followed O’Connor’s career closely, from her early work as a solo artist to her stint in the duo Tapis Bleu through her current project, Vedora.

“He knows our songs and our development almost as well as us,” O’Connor says. “It’s a really amazing feeling to have someone who listens so intently. I don’t think anyone listens better than he does.”

Hagen agrees. He likens Lewis to an overeager student at the head of the class, absorbing everything, hand raised, anxiously poised to answer a teacher’s next question.

“And that’s what makes him so genuine and so receptive to what we as musicians do,” Hagen says. “To have someone recognize what we’re trying to do and be passionate about it is huge. And Tim is that guy.”

The print version of this article was headlined "Who's That Guy?".