Jake Blend's Spirograph Is One for the Record Books | Live Culture

Jake Blend's Spirograph Is One for the Record Books

This spring, South End artist and maker Jake Blend's daughter, Alexis, was playing with sidewalk chalk. Specifically, she was trying to draw some sort of "tear in reality," Blend told Seven Days during a recent visit to his Generator studio.

Her endeavors got him thinking about trying to make a Spirograph — that nostalgic geometric drawing toy made of interlocking gears — for sidewalk chalk. And then Blend started thinking about making a really, really big Spirograph — Alexis wants to be in the Guinness Book of World Records, he explained. And so began a project of massive, geometric proportions that debuted at this past weekend's South End Art Hop: the World's Largest Spirograph.

At least, Blend thinks it's the world's largest. The biggest documented Spirograph he was able to find had a diameter of nearly 10 feet — so he decided to double that. The 20-foot outer gear of his contraption is made of 16 interlocking, toothed pieces of plywood. Blend made these using the Generator's Computer Numerical Control Router — a machine that can be programmed to cut specific designs. With the help of instructor Heather Hayes, Blend received his CNC Router certification just last month. Hayes described Blend as a "determined nerd," and a great student. 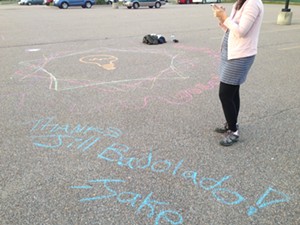 In mid-June, Blend connected with Jill Badolato, who was then the director of social responsibility for Dealer.com and in the midst of planning the company's Art Hop STEAM party. Badolato offered to sponsor the Spirograph through Dealer.

Blend's most immediate need was lots of wood. (He first experimented with using rubber, but found it was too difficult to cut.) Dealer laid off Badolato August, and Blend noted that the Art Hop party doubled as a sort of going-away party for her.

So what about breaking records? Blend said he has submitted an application for consideration to Guinness, but that fast-tracking the request comes with a $1,000 price tag — those who don't fork over the grand are made to wait up to 15 weeks for review. Blend has started a GoFundMe to raise these funds

Record-breaker or no, the decidedly very, very big Spirograph will be making several local appearances in the near future. These include the Anthill Collective's inaugural Above the Radar Graffiti Festival at 1 King Street in Burlington, which runs this Friday through Sunday, September 15 through 17, as well as at the Champlain Mini Maker Faire at the Coach Barn at Shelburne Farms on Saturday Sunday, September 23 and 24. Blend will also present the Spirograph at the Essex Mini Maker Faire in Essex Junction as part of the town's first-ever steAmfest. That fest takes place on Friday and Saturday, September 29 and 30.