Seven Things to Know About Shrinedom 2017 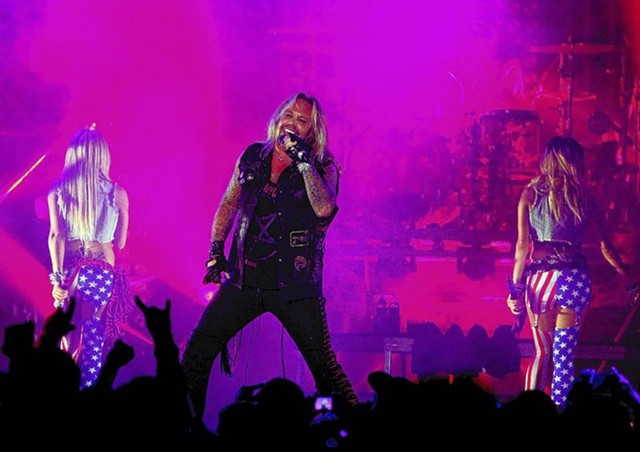 In the ’80s, the union of pop and rock and roll reached a critical mass. The guitar riffs were big, the hair was bigger and a monolithic, blown-out sound ruled the arena circuit. Whether you called it hard rock, cock rock or hair metal, maximum rock riffage and shout-along hooks dominated the charts and left a permanent mark on rock and pop culture at large.

In the ’90s, other styles — such as grunge and jam-rock — swept in to take pop metal's place. But for some devotees, the electrifying strains of juiced-up riffs and screechy vocals were as good as it gets. And this weekend, fans of coiffed locks and tight pants can return to the arena, figuratively speaking, with an epic concert: Shrinedom 2017.

All proceeds from the concert benefit the Mount Sinai Shriners #3. That's the Montpelier-based chapter of the Shriners, the national fraternal organization best known for its tiny cars, culturally re-appropriated fezzes and children's hospitals.

Let all that sink in for a second …

Crossova's founder, Marc Clay, is a veteran concert promoter. And judging by his company's insignia — a treble clef wrapped around a winged sword like a serpent — he's all about the capital-R Rock. He recently relocated to Vermont after spending many years in southern states such as Georgia and Tennessee. He is also a Shriner.

"[Mount Sinai #3] have never thrown an event of this nature," Clay tells Seven Days in a recent phone interview.

During that chat, Clay got us up to speed on everything Shrinedom. Should you go, here are the seven most important things to know.
1. It's truly a Shriners affair.
The gates open bright and early (7 a.m.!!!), and the Shriners will be waiting — some dressed as clowns — to paint you and your kids' faces and dazzle you with their diminutive motorcade and mini choppers. It sounds like a bona fide Shiners parade. You'll also have the opportunity to become indoctrinated into the brotherhood, should you be interested.

2. Hard rock is not the only genre represented.
The early portion of the day is devoted to country music. Bands and artists include Big Whiskey Social Club, Caroline Gray, Southern City Band and Alec MacGillivray.

3. There's only one way in and one way out.
If you're planning on driving to the show through the neighboring town of Albany, think again. You'll have to go through Irasburg. The portion of Creek Road just south of the venue will not be open to traffic.

4. Vince Neil's backing band is Slaughter.
The Mötley Crüe front man won't be singing along to pre-recorded tracks like Sugar Ray's Mark McGrath did during his recent performance at the Champlain Valley Fair. Though Neil's legendary brethren won't be backing him up, his cronies in Slaughter will likely shred the shit out of hits such as "Kickstart My Heart" and "Girls Girls Girls."
5. Clay's business partner is kinda famous.
OK, this doesn't really pertain to the show, but Clay's business partner is Jimmy Gates Jr., a founding member of ’90s R&B sensation Silk. Remember their sensual slow-jam "Freak Me"?

"The reality is that Phish ruined a lot of things for events in this area," he says, referring to the band's August 2004 weekend concert in the adjacent town of Coventry. The shows were purported to be the group's final live performances ever, which led to an unprecedented level of chaos.

"It's the first [event] that's happened in this area of this scale since [Coventry]," he says, which means that security is going to be tight. No alcohol will be allowed — or sold — on the premises.

But that doesn't mean you'll have to be sober, exactly. Clay breaks down the only way you'll be able to tie one on at this show.

"Here's how it works: You're parking outside. Your vehicle is your private property. If you wanna drink in your car, we don't care," he says.

And unlike most festivals, there is, in fact, reentry. So, theoretically, you can make unlimited trips to and from your car — as long as you keep your wristband attached and intact.

This, of course, doesn't give you license to overdo it.

"If you're drunk, staggering [and/or] slurring, we will not let you in," Clay says.

And that's to say nothing of how the fine men and women of the Vermont State Police will treat you should get behind the wheel after pounding Jack Daniel's, Crüe style.  We know it's antithetical to the legendary excess of the genre, but please drink responsibly.

7. No moshing.
Alright, now they've gone too far. No moshing? Seriously? How can we be expected to rock out to the fullest — especially when Lita Ford is belting out "Kiss Me Deadly," or when Warrant unleashes "Cherry Pie" — and not thrash around like a fish out of water?

"If anyone is caught moshing or doing any stupid stuff, they're gonna be removed," Clay says.

OK, fine. I'm sure none of the drunk people will try to mosh, anyway.