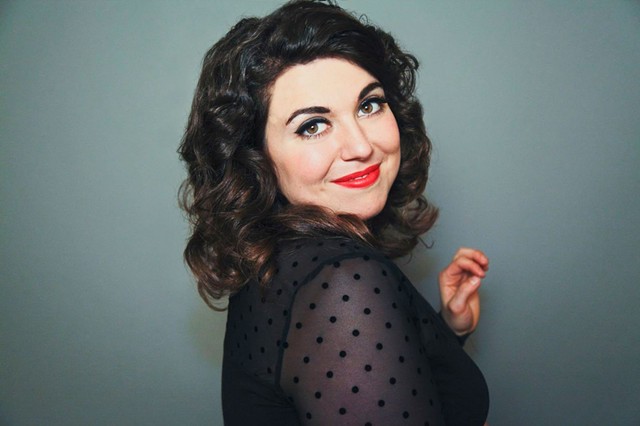 She costars with her pal and fellow comedian Jen Saunderson in the IFC web series "The Filling Is Mutual." That's a cooking show in which the duo concoct offbeat recipes based on their friends' standup bits. (Our favorite: White Devil Eggs, a take on deviled eggs inspired by a Langston Kerman bit about racism.)

In March, Zigrino dropped her debut comedy record, JZ's New Album.  And later this month — September 23, to be precise — her first half-hour standup special will air on Comedy Central. Zigrino tours nationally — she headlined the Vermont Comedy Club earlier this year. She's on the road again and heading back to Burlington this Thursday, September 14, to perform at the Flynn MainSta … wait, what?

This just in: We're being informed that Zigrino is actually appearing at, of all places, Foam Brewers in Burlington on Thursday, as part of local comics Kendall Farrell and Nicole Sisk's monthly standup showcase at the waterfront beer hall, Brews & Bros.

Seven Days caught up with Zigrino to chat about her hilarious IFC series, working with Thornton and why the hell a comic of her stature is playing a brewery.


SEVEN DAYS: Your career is going gangbusters right now. You have a special coming out, you were in a big movie, you were just on "Conan" again. So … why the hell are are you playing at brewery in Burlington?

JENNY ZIGRINO: [Laughs] I love doing those shows! They're just fun. I had some time between shows, so I'll get to try some new stuff out and have fun.

SD: So it's a lower-pressure environment for you. You get a chance to play around and experiment a bit.


SD: And Foam is awesome, by the way. Moving on, I loved "The Filling Is Mutual." Where did you get the idea to do a cooking show based on jokes?

JZ: It was something Jen was doing back in Seattle. I loved the idea, so we tweaked it and came up with a more refined concept of what it was. We were lucky enough that IFC liked it and let us put it into the internets. Jen loves to cook and I love hanging out with her while she cooks. So it was perfect.


SD: So, Jen is more the culinary mastermind. But how do you go from joke to food?

JZ: We pick our comedians, and she gets really in depth about the food. And I bring more of the joke aspect to it. Like when we did the Aphrodisiac Cupcakes, I was very insistent that we have oysters. And she was not. She had done the research and was like, "Oh, here are all these different aphrodisiacs and I made this cupcake." And I was like, "OK, cool. Now let's put oysters on it."


SD: Yeah … that was pretty gross.

JZ: I know! And I made everyone eat oysters on their cupcakes. I got sick, definitely.


SD: So Jen is inventing her own recipes?

JZ: Totally. We'll work from a base recipe sometimes. But it's, like, 65 percent Jen, and then I'll come in and add some things that will make it more fun. Like, on the the White Devil Eggs, I was like, "Let's add the Boston lettuce because, you know, it's Boston … and it's racist."


SD: Do you have any comics on your wishlist for future episodes?

JZ: I'd love Maria Bamford. I think we'd have a lot of fun with her. Kyle Kinane would be really fun. Also, his last album was all about food. But it's mostly just our friends.

SD: So what was it like working with Billy Bob Thornton?

JZ: It was really fun. He's so sweet and has a lot of great stories. He kind of holds court on set. It was a great learning experience. I would sit in with the director, Mark Waters, and kind of learn how directing works. And that's something I want to do eventually.  So it was great. I mean, Montréal in the winter is really cold. But it was great.


SD: What kind of feedback have you gotten from people who've seen it?

JZ: I think, now that it's hit Netflix, more people have seen it. People just like watching movies at home now, which makes me sad, because I love going to the movie theater. But now I get more people being like, "I just saw you in Bad Santa 2! You were really great!" Or at least that's what they say to me.

JZ: Isn't it a great place?