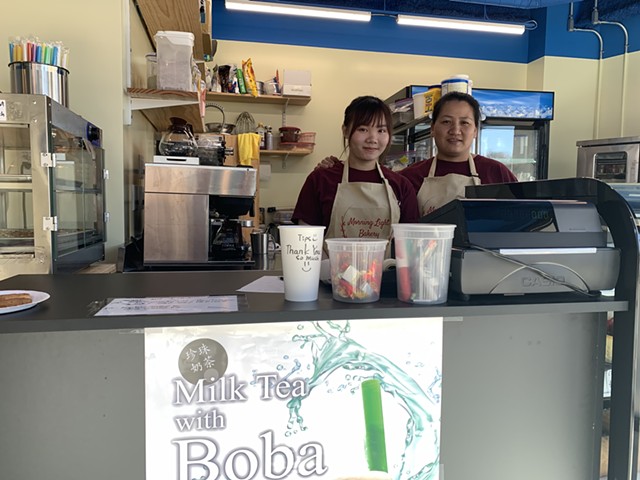 Ken Liu’s parents will miss their son’s naturalization ceremony Thursday
afternoon in South Royalton. The couple is occupied with a milestone of their own: They opened a bakery Thursday morning in Winooski: Morning Light Bakery.

Morning Light Bakery, at 106 East Allen Street, is a self-serve shop that
specializes in Asian pastries, sweet and savory. The bakery, at the site previously occupied by Dobra Tea,  is owned and operated by Ken’s parents, Ann Wong and King Chiu Liu. The family emigrated from Hong Kong eight years ago and settled in Essex Junction. (Ken's parents became U.S. citizens before their son did.)

“They have always wanted to open their own business,” Ken said. “And here we go, finally, after eight years. We are wanting to bring the stuff that people haven’t seen yet into the town, something that is different, that no other people have done before. Perhaps people could try something different.”

Morning Light Bakery serves cookies, pastries and cakes, including chocolate-
blueberry cake and cheesecake. Ken recommends the bakery’s pineapple bun,
which he said is “crunchy and sweet and tastes amazing.”

Other menu items include egg tarts, a savory pastry of tuna, corn and cheese, and square pizza topped with ham, cheese, green peppers and pineapple. “My dad found a passion in baking some pizza,” Ken said. “That’s something they want to build on.”

Bubble milk tea is available in five flavors at Morning Light: classic, taro, mango,
strawberry and coconut. The bakery is open Monday through Saturday from 7 a.m. to 5 p.m.
Prev
Next