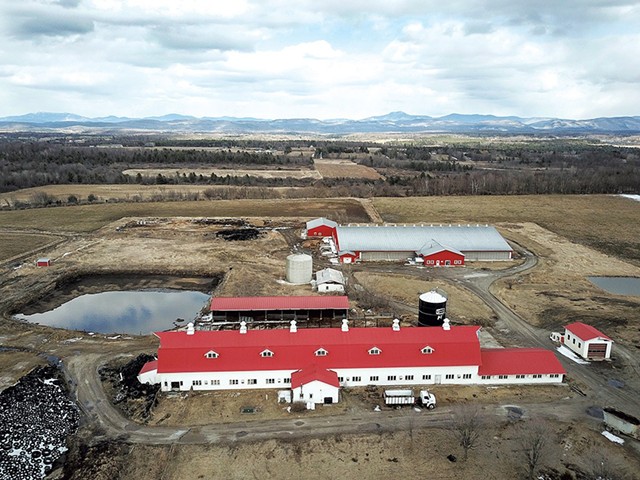 It's no secret that Vermont's dairies are struggling. But could the state's burgeoning beer industry help to save its local farms?

The Route 7 farm is conserved under an agricultural easement by the Vermont Land Trust. In dairy circles, it was well known as an early adopter of robot-milking technology.

In 2014, then-owner Clark Hinsdale III passed the milking operation off to longtime farm manager Michael LeClair. But after years of seesawing milk prices, LeClair filed for Chapter 7 bankruptcy in August 2017. He sold off his herd this past March.

Hinsdale put the farm on the market in January, Peterson said, and the two started talking. As a test run, Peterson contracted with Ferrisburgh farmers Brian, Bill and Tim Van de Weert to sow more than 400 acres of cereal grains — mostly barley — on the property.

In the past, Peterson supplied his modest Monkton malthouse with purchased grains from around the region. He also worked with local farmers, who grew barley specifically for him. “It was basically whoever we could get to do it,” Peterson said. In 2017, the malthouse sourced grain from 165 acres of small plots in Monkton, Ferrisburgh and New Haven, most of them 10- to 30-acre spreads, Peterson said.

The 2018 Nordic Farms planting increased the company plots to 720 acres, but Peterson said his long-term goal is to work with additional farmers to reach 7,000 planted acres. "We’re going to continue to lease as many acres as we can," the maltster said, "so we can produce as much [malt] as we can."

Thanks to a warm, relatively dry summer — and the help of the Van der Weerts' investment in a massive new harvesting combine — Peterson's 2018 harvest yielded more than 400 tons of grain.

The harvest justified the farm purchase, which Peterson financed with a mortgage through Middlebury's Yankee Farm Credit. An additional line of credit will fund site work, renovations and major equipment purchases.  Private investment, along with help in business planning, came from Peterson's Hotel Vermont partners.

"I'm between amazed and stressed," Peterson said of the project. "It’s a much bigger undertaking than I ever thought I’d likely do."

Expanding the manufacturer's capacity will enable Peterson Quality Malt to service more of Vermont's breweries, and larger ones, Peterson said.

Until now, Peterson has been able to supply just few small brewers, including Bristol's Hogback Mountain Brewing, Vergennes' Hired Hand Brewing, Waitsfield's Cousins Brewing and Foam Brewers in Burlington. But, "With the larger [grain] supply, we’ll be able to get to some of the mid-sized breweries," Peterson predicted, adding that he hopes larger breweries will use his product to create Vermont-grown flagship brews.

Peterson said his first order of business is to convert the farm's modern free-stall barn into a malthouse. The steel-clad structure is nearly an acre in size, he said, and its large footprint and high ceilings make it perfect for a large malting operation.

Once that's squared away, he and his partners will begin exploring other ways to use the farm's facilities, which include several buildings. Because of the property's conserved status, all use must be ag-related.

"A farm brewery is a really cool idea," Peterson said, adding that such breweries exist throughout New England and New York, but not yet in Vermont.

Peterson said he'll continue to rent the property's residential homes for the foreseeable future. As for the farm's iconic red-roofed barn? "We’re not sure what we’re going to do with that yet," Peterson said, "but it’s a beautiful building, and we want to make sure it’s used."
Prev
Next